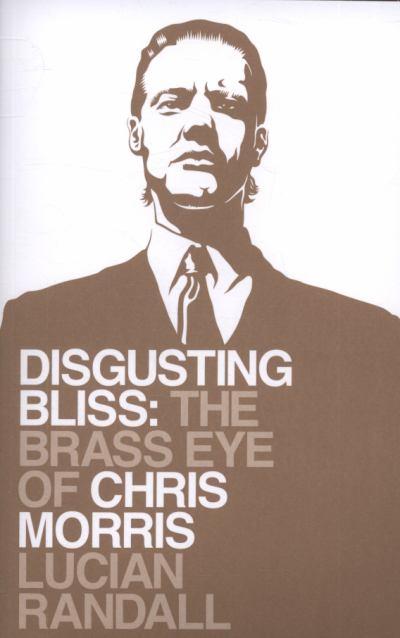 It was probably a given that I’d review this new book on Chris Morris; he’s one of my all-time comedy heroes, and I tend to write a lot about him anyway.  That said, I didn’t know a whole lot about him; stands to reason, though — not only am I in the wrong country to really get the influx of Chris Morris information that could be out there, he’s also pretty secretive about himself.  I basically knew the big hits — he got his start in radio, he got a degree in Zoology, the Daily Mail hates him — but then they seem to hate anything pure and good, so there you go.  But not a whole lot else, outside of his work.

Lucian Randall (who also authored a biography on Vivian Stanshall as it turns out — another book I’ll have to read) fills in a lot of the gaps.  I didn’t know that he had a brother who works in theater, for example — or even that the Bad Sex 10″ single was part of a proposed series of collaborative singles with IDM artists to do Blue Jam type sketches and that there was another single released — the other was “Push Off My Wire” by Matt Elliott.

Randall’s writing is clear and interesting, and he had about as much support from Chris Morris as could be expected — Morris allowed his friends and relatives to talk to Randall.  This isn’t to say that Morris is a tyrant, but rather his friends think so highly of him they all checked with him to see if it was all right to talk about him to an interviewer.

The book starts with On The Hourand The Day Today, but then goes back around to the early days — a bit of Morris’ school days, his early bands and his early forays into radio.  Lots is given to his working techniques which is really interesting, considering that he’d tend to do everything himself, including composing jingles, and editing it all on analog tape with razor blades.  He’d continued this even through On The Hour, which led to the added benefit of being able to drop his finished pieces into the show as-is, as they were impossible to pull apart and re-edit by others.

It’s also amazing how long the gestation period is on some projects — Brass Eye was a few years in the making.  This isn’t surprising when you look at the amount of work that has obviously gone into the show, but it IS surprising how the content didn’t age at all — and is still timeless. Likewise, the bits about the brilliant Richard Geefe columns in the Observer are great — and I was surprised to find out how much controversy those generated.

Not much space is really given to Nathan Barley, which is a little unfortunate as it’s a bit of an outlier in Morris’ oeuvre (and a show I thought was really underrated).  I would have liked to have known more about the start of that aside from the main story that it was based on Charlie Brooker’s TV Go Home project.  The idea of Chris Morris doing more-or-less a straightforward sitcom is interesting and the Banksy-parody book that comes with the DVD edition is cool too. This isn’t a problem of devoting too much space to other projects, though — this is just a problem that publishers would probably balk at a 500 page book, even though I sure wouldn’t. The book ends just as Chris Morris is directing Four Lions; no information is given about the film, but that’s fine with me as I’ve been trying to avoid spoilers on it either until it comes out in the US (unfortunately, it’s not playing the SIFF, which premiered In The Loop last year), or more likely, I order the DVD from the UK this September.

It’s sad that Chris Morris is so unknown in the United States; his work is brilliant — and luckily, Randall’s new book is worthy of that brilliance.  Randall makes clear why it is that Morris is so damned important as a satirist (even though Morris balks at the term), and I’d recommend it to anyone trying to figure out what this Chris Morris thing is all about.  Perhaps if there’s a run on copies of the book being sent to the US, we’ll get some of his stuff over here.  It’s not likely, sure, but one can always dream.  At least it’s dead easy to import things, so getting this stuff isn’t as difficult as it once was.  If you’re a comedy geek like I am, you really need to watch Brass Eye and Jam. If you’re a media geek or someone who thinks about the news media, you must watch The Day Today and Brass Eye.  And, well, if you want just really great, well-done programming, just get the whole lot of everything Chris Morris has ever done — and get this book, too.