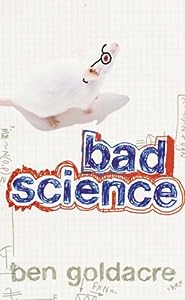 I’m a bit of an Anglophile, but, at least viewed from the outside, British libel laws are crazy.  In the US, it’s the onus of the potentially libeled to show that they were, but in the UK, the potential libeler has to show that they DIDN’T.  Which doesn’t seem like a huge difference on the face of it, but it ends up that we get cases like the libel case brought against Dr. Ben Goldacre over a chapter his his book Bad Science about the heinous Matthias Rath.  If you’ve not heard of this swine, Rath is an AIDS-denier — he doesn’t believe that HIV causes AIDS, and, what’s more, he says that AIDS medicines do more harm than good.  Normally idiots believing bullshit isn’t a huge problem — but in this case, Rath found a buddy in the then-President of South Africa, Thabo Mbeki who believed the same.

To listen to Rath, you’d find out that the anti-retroviral drugs like AZT were poisonous, you would find out about the TDF lawsuit and all that’s happened. Then he would tell you that the only answer was to take multi-vitamin supplements.  I’m about to blow your mind here:  Turns out, Rath’s line was in selling such supplements. Shocking, I know.  Again, typically, vitamin supplements are a good thing, or at the very least a neutral thing — some supplements are more than the body needs, which means the extra vitamins just end up being eliminated, resulting in nothing more troublesome than very expensive pee.  Unfortunately, Rath wasn’t just encouraging people to take his vitamins — his heinousness was twofold:  Not only was he actively encouraging and demanding patients stop taking the drugs — which would be bad enough, but some of the vitamins he shilled actually HELPED the AIDS virus.

Dr. Goldacre — a real live doctor, not like Rath — wrote a detailed takedown of all of Rath’s crimes and was greeted with a libel suit against both himself AND his publisher, The Guardian.  In the hardcover edition, the Rath chapter had to be excised.  Finally, Rath dropped the case, and has so far paid only half of The Guardian‘s legal costs, and the chapter’s been published in the paperback edition — as well as free online at Goldacre’s own site, BadScience.net for those who bought the hardcover (or, for those who might want to find out about the monstrous Rath).

The chapter also works as a great teaser for the rest of Goldacre’s excellent book.  While the Rath chapter is probably the one that will make you the most angry, the rest of it is important to read as well.  The first couple chapters act as a crash-course in science and research methods and techniques — but it’s not dry.  Goldacre brings up obviously crazy examples and shows how they can be debunked with a little bit of thought.  Afterwards, though, he brings up some of the less immediately-wacky examples that we see everyday.  For example, claims from nutritionists (typically those selling their own brands of supplements, books and whatnot), advertisers’ claims about beauty creams — based with a kernel of scientific truth blown out of proportion to the extent that they’re no longer remotely true, and, the big one — the autism vaccine scare.

That last one is particularly frustrating; a lot of people treat it as true.  I’ve been given vaccines where the nurse feels obligated to give a spiel about how many people think that vaccines can cause autism and that there’s problems with the mercury that used to be used to preserve them and etc. etc. and if you want to refuse that’s OK, but there’s no evidence of it.  It’s frustrating that even though the nurse says it’s not true, which it isn’t, but that they even have to ADDRESS such obvious idiocy — idiocy spurred on by only ONE paper that was riddled with errors and finally later sheepishly revoked by the author of said paper, but only after he’d had his 15 minutes of fame.  But even the debunking of that paper hasn’t stopped folks like Jenny McCarthy from continuing her stupid, wrong crusade.  If I might engage in some logically fallible ad hominem-type attacks that don’t help anything but sure are fun:  Why are people taking their ideas on medicine and disease from a woman most known for playing stupid, vapid people, and for making a film where a grandmother slips on her character’s menstrual blood?  I’m just saying.

Dr. Goldacre, however, doesn’t descend into stupid ad hominem attacks like I do — which is why you should read his book.  He’ll teach you a lot — and he’s really engaging to boot.  And, well, it’s good to hear from people fighting the good fight for truth and justice and just good ol’ knowledge. Luckily, Bad Science will get published in the US — it’s coming in October.  Hopefully this bodes well for other territories: It should be published all over the world and be required reading in schools.  Check it out.