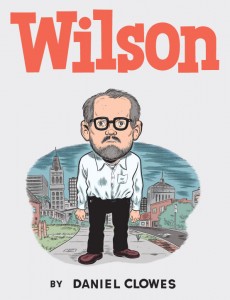 I want to eat Dan Clowes’ brain.  If I can’t have all of it, that’s fine — I just want the writing parts.  If I could write stories half as well as Dan Clowes, I’d be really something.  And that’d be enough for most people, but Clowes is also a master artist.  He just has to have the whole package — instead of sharing it with others.  Like me, I can’t draw a lick.  But I’ve gotten used to a lack of drawing skills — so to be able to write like him… jeez, that’d be great.

Clowes’ new book, Wilson, his first for Drawn & Quarterly, is one of the best he’s done.  He’s continuing in the vein of the last two issues of Eightball, “Ice Haven” and “The Death Ray”, with the fractured narrative of a page per sub-story.  Like most of Clowes’ dramatic work, it’s less about a straight-forward narrative and more about exploring characters, the kind of people they are and the various things they do when confronted with situations.

The title character of the book is a fundamentally alone type of person, like a lot of Clowes’ characters — Enid from Ghost World or the title character from David Boring, but unlike those, Wilson is a bit more active in his fate.  Unfortunately, unlike Enid or David, he’s much more ill-equipped for it.  Where Enid was trying to tear down the walls she’d built around herself, Wilson doesn’t seem to realize he’s constantly erecting them.  David Boring wants a connection with people, as Wilson does, but David is too passive.  Wilson, on the other hand, is too actively aggressive.  He tries to reach out to people, and when they open up to him, he insults them almost immediately.  If they try to ignore him, he still insults them.

The back cover refers to Wilson as a sociopath, which definitely has some ring of truth to it, but he’s not even very good at it.  As pointed out in Columbine(and in Dexter, for a fictional example), most sociopaths are so adept at blending in that no one would know; Wilson, on the other hand is utterly oblivious to the feelings of people around him.  One might also be tempted to diagnose Wilson with Asperger Syndrome, but it also seems that his obliviousness doesn’t extend to not realizing he’s insulting people — nor does it adequately explain his moodswings — telling someone how much he loves them after calling them a soul-sucking beast in the conversation before.

The way the narrative unfolds is particularly interesting — there’re clues and hints as to what’s going on, but the reader typically misinterprets them until a character explicitly makes reference to what happened well into the event, if not near the very end.  Because of this, I’m not going to go into the details of the plot, as I don’t want to spoil any of the ride — but most people writing this story would focus on the gripping narrative arc rather than the individual moments illustrating Wilson’s character, making a pulp-esque story a literary masterpiece.

Dan Clowes has always been a master, from his early, more comedic works, to his films, to his longer dramatic works, and Wilson is no exception.  Clowes continues to get better, which is amazing, since up to this point, I’d thought The Death Ray was one of the best comics ever written… and before that, Ice Haven, and before that David Boring.  So I hope you understand why I have to eat Clowes’ brain.  It should be obvious, really.