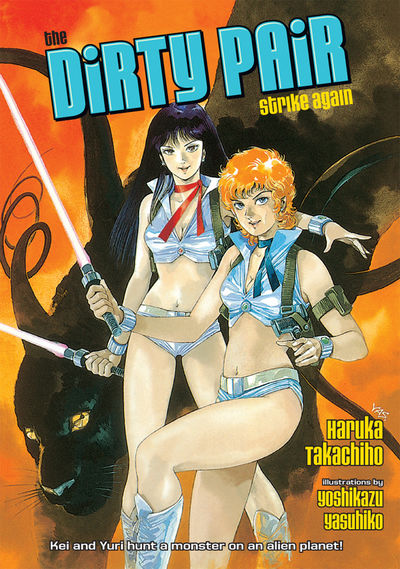 Question: how do you follow up on two action-packed novellas in which clairvoyant women solve strange cases and leave considerable destruction in their wake?

If you answered “why, you write a full-length novel for those two women and turn the dial on everything up to a ten!” then you are correct. And that’s just what The Dirty Pair Strike Again (ISBN 978-1-59582-101-0; $8.95) is: the first full-length Dirty Pair novel, and the story that kicks it up a notch.

What Dirty Pair creator Haruka Takachiho did here was to take a seemingly simple premise and layer it so effectively that there was really no way to guess what directions in which the story would go. Right from the beginning, the story is intense and filled with action, but it’s not a mindless string of fights and chases. There’s a major plot here, slowly unraveled as the Pair, Kei and Yuri, unwittingly get themselves in way over their heads.

Before their chief even lets them out of the starting gate, the race is on as mysterious assassins in powerful battle suits attack the WWWA and attempt to wipe out our lovely heroines. But the Dirty Pair being the Dirty Pair, they just barely worm their way out of danger, if not without a few bruises. And, of course, their fight with their strange attackers causes more than enough damage for the chief (and other citizens of planet Lyonesse) to see them off on their mission to Chakra with nothing less than absolute fury.

Chakra, a remote mining planet, has a thin crust and an unstable economy, but its inhabitants get by… or rather, they did until an invisible beast started taking big bites out of things, including the populace. The fact a miner actually survived an encounter with this creature prompted the enigmatic mayor to request WWWA Trouble Consultants. But no sooner do Kei and Yuri arrive than they find themselves under attack. And, in their usual fashion, they make enemies everywhere they go.

Not surprisingly, Kei falls for the lone city’s hunky sheriff, Jeff, and competes with Yuri for his attention, while their powerful pet Mugi watches their backs. Mugi is more than just an accessory in this story; without him, Kei and Yuri would be outmatched by their unseen foe. Of course, Mugi can’t do all the work, so when she’s not busy fawning over Jeff, Kei manages to work together with Yuri just enough to form a plan of action. Naturally, that plan requires changes as the pieces of the puzzle slowly start to come together.

The Pair’s ESP abilities are put to very good use in this story. While they were a convenient way for the duo to solve their earlier cases, here they are allowed to do more. We are given interesting examples of what powered-up espers can actually do. What follows would not happen were it not for this gift, making it feel more inspired here than it did in previous adventures.

Unlike later incarnations of the Dirty Pair, this series consistently pits them against a powerful criminal organization called Lucifer, which again is revealed to have connections to a case of theirs. This time, however, Lucifer doesn’t play the sort of role one might expect, and as Kei and Yuri come ever closer to uncovering the truth, they find, surprisingly, they have bigger fish to fry.

Takachiho weaves a good, solid web of a story, saving the really big surprises for the book’s final pages and keeping readers guessing right up until the climactic battle. Illustrator Yoshikazu Yasuhiko provides a handful of well-drawn pictures that give us a chance to see the action a bit more clearly. And, of course, with the story being told from Kei’s perspective, we’re treated to more of that amusing conceit and reactionary thought that help make the Pair’s stories so much fun to read.

The only minor gripe I have is with the proofreading of the English-language version, as a couple of formatting problems and a few punctuation errors managed to make it past the editor’s radar. They are glaring enough to prove distracting, but small enough that one can see why they weren’t caught. Still, the translation is good and the narration and dialogue well-handled, giving the book the readability it needs to be enjoyable.

The Dirty Pair Strikes Again is an intense, solid action story that should please any Dirty Pair fan. Hopefully Dark Horse will be able to bring more of Takachiho’s works to the English-language market; I suspect we’d be missing quite a lot of good stuff otherwise.