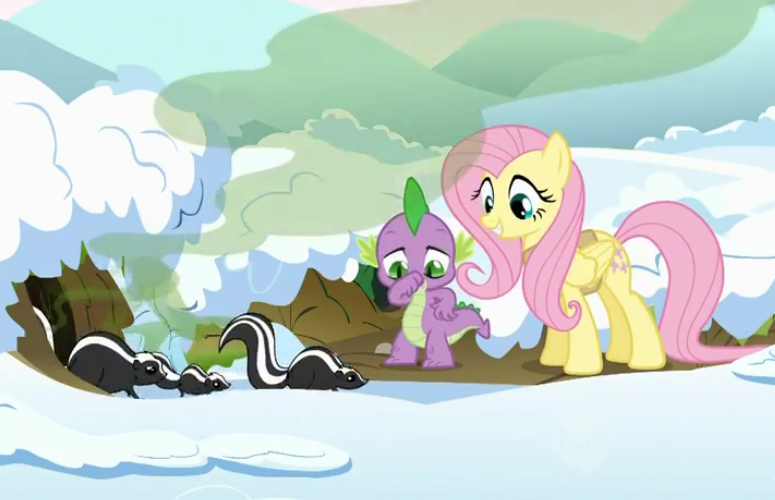 Tyger: It is time for winter to give way to springtime which in Ponyville is not exactly a “natural” occurrence.  Rather, it is a manual affair where weather changes, bird migration, (ending) animal hibernation and the like are all handled by the locals.  They are divided up into teams handling the various details as per their talents – for example, the Pegasi take care of the weather and birds, etc.  However, since Ponyville was originally founded by Earth Ponies there is an extra catch – this is all done without the use of any kind of magic.  This poses an obvious problem for town newcomer Twilight Sparkle, she being the Element of Magic and all.  Desperate to find her place and fit in, Twilight tries to assist each team as best as she can, generally with mixed-to-disheartening results.  While hiding in shame after breaking the rules a bit, the Unicorn Pony discovers an undiscovered role that she is uniquely qualified to fill, and with her help, spring arrives to Ponyville on time for the first time in several years.

This episode is so good that it hurts my soul that I’m not watching it at this very moment.  OK, that may be something of an overstatement, but it’s probably pretty difficult to find a MLP:FIM fan that won’t place this one in their handful of top tier episodes.  And as someone who hates anything remotely resembling “showtunes” with the fury of a thousand burning suns, I have to admit that the Winter Wrap Up Song (one of a handful of notable musical numbers in the series) can’t fail to put a smile on my face and get stuck in my head.  What started with the previously aired Swarm of the Century is fully realized with this episode – the whole show really hits a higher quality stride from here on out.

Moreover, for Twilight Sparkle fans, this one is a treat as well.  Since she primarily functions as the point of view character, the action in most episodes tends to take place around her.  However here she is undeniably the central character, and her well-meaning desire to fit in and contribute is nothing but sweet.  Her bookish skills earns her the newly created title of “All-Team Organizer” and that is one of my favorite of her moments.  It is a great juxtaposition as well – in Look Before You Sleep it could be argued that her well meaning impulse to co-ordinate everything made a touchy situation even worse, but here, finding the right venue for her skills really lets her shine.

While Twilight is the central character, this is one of the most (if not the most) effective ensemble pieces in the show which only adds to the strength of the writing.  Is this a good starter episode?  One of the best.  Repeat viewing?  A thousand times yes.  Final verdict: canonically awesome.

Rev. Syung Myung Me: Eeee, this is possibly my favorite episode.  And, for me, it’s one of the best to start folks with because it’s so very strong AND it features everypony.  (Including a few Pegasi who stole Derpy’s cutie mark!) This for me, is one of the MLP:FIM episodes.  So well done, it just blows my mind.

I can’t think of a single complaint about the episode.  Maybe that it’s not like, fifty times longer, but that can be remedied by just watching the episode fifty times in a row.  It pretty much holds up to that, too.  This is one of the handful of canonically awesome ones — ones you could pretty much show anyone as an example of a good cartoon show, not just a good episode of MLP:FIM.

This is also the first with a really great musical number (though, Flutterguy’s version of “Evil Enchantress” is pretty neat, too).  “Winter Wrap Up” is SUCH a great song — it actually reminds me a bit of late-era XTC, and that’s intended as a high compliment.  The animation in the number is spot on as well — I love the part at the end when Twilight’s on the cliff edge and Derpy and a friend fly up in a spiral/helix motion.  I had to watch that scene twice just now; it’s that amazing.  (I also was amused how Mayor Mare looked at the end when she’s got to haul things as well — her expression betrayed that she didn’t think she of all ponies would have to do manual labor.)

One thing I thought was kind of cool which goes against TV Show Cliche — not all of the group leaders were members of the Mane 6.  Applejack and Rainbow Dash were leaders of the farm and sky respectively, which makes sense, but the animal leader was NOT Fluttershy, but a background pony.  Normally when watching a show, the main characters are pretty much the only ones who get to do anything ever.  It makes sense that Applejack and Dash would be their group leaders, of course — but it was nice to see someone else get to play, too.

There are a lot of good episodes, but I think this is the first that really hits the Extreme Highness that MLP:FIM can reach — there are a few, and we’ll get to those later — but this one is a must-watch for anypony and everypony.

Bridgeport Cat: One thing that nearly every children’s show does is an episode on fitting in. While a few other MLP:FIM episodes take on this topic, none of them do it better than “Winter Wrap Up”. Twilight Sparkle frets and worries over the fact that she just isn’t fitting in, and this is something that anyone (even adults) can relate to, as fitting in is a cornerstone of our society. What this episode does spectacularly, though, is show that Twilight truly DOESN’T fit in with the traditional roles she’s given, and through embracing herself and what she’s really good at she finally finds a place to belong.

Most shows tackle the “How Do I Fit In” question by shoehorning the character in some already-established archetype role or club, but MLP:FIM doesn’t talk down to the audience so it doesn’t go for the easy route. Twilight is absolutely terrible at all the already established clean-up roles, and only when her unique talents are recognized and accepted does the Ponyville society begin to work smoothly. I sort of saw this episode as a fairly obvious allegory about the importance of acceptance and incorporation of alternative lifestyles/disabled/non-neurotypical into the workplace/society.

As someone who has worked with agencies that employ the disabled, I absolutely FELT for Twilight this entire episode. I’m not great at skating or nestmaking or many other skills employers are looking for, but I absolutely have other talents that could benefit companies and such. It’s only when the employers/citizens of Ponyville look past the archetypal roles and embrace Twilight’s real skills that everything starts to fall into place.

It’s a fantastic message that meshes into the underlying “Being yourself is really OK, no matter what” theme of MLP:FIM. Of course, the animation, timing, and acting in the episode is also great, with my favorite part being Twilight’s total failure at skating. I also liked the fact that Twilight freaked out when she realized that not all of the creatures she had to wake up were cute and cuddly. There were just a ton of great little touches in this episode, and I can’t praise it enough. It’s definitely my second favorite episode out of the first season, though!