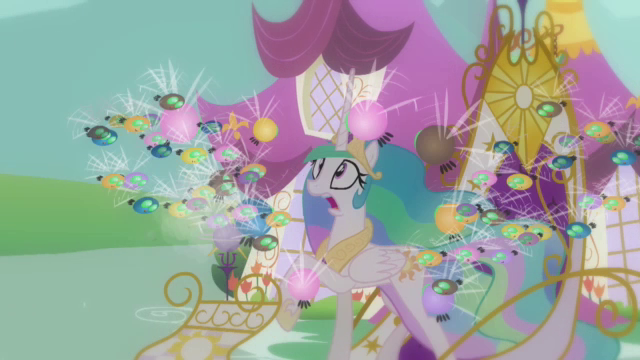 Tyger: While doing her usual thing in the forest, Fluttershy comes across a winged, friendly and adorable little critter that she had never seen before.  Excited to show off her find, she tucks the little guy into her mane and heads back to town.  When showing her friends the new critter, she finds that there are three rather than just one of them stowed away.  Since they are cute everypony was interested in having one of their own – all except for Pinkie Pie who exclaims “ugh, now I have to go find a trombone,” and storms off.  This outburst is perceived as “typical Pinkie.”  By the next morning the rapidly reproducing Parasprites turn Ponyville into a redux of the Star Trek episode “The Trouble With Tribbles.”  Princess Celestia is coming for a visit, so the ponies (except for Pinkie who is apparently busy doing her own thing) are desperate to deal with the rapidly escalating infestation.  Rainbow Dash and Applejack are unable to control them, and after Twilight Sparkle casts a spell to make them stop eating all of the food in town, they start eating everything except for the food in town.  Just when the Princess arrives and it appears that Ponyville is lost, Pinkie Pie appears wearing a “one man band” contraption that she has assembled from gathered musical instruments and “Pied Pipers” all the Parasprites out of town and into the nearby Everfree Forest.

Regarding this episode, I have to disagree with Rev. Me just a bit.  While Look Before You Sleep is certainly a solid little story, I think that this one is the first truly great episode after Applebuck Season.  Everything about this particular episode is splendid.  This is a true ensemble piece, everypony gets her moment, and the action scenes/sight gags are top notch.  There is great dialog as well, from Rainbow Dash’s Six Million Dollar Man reference (“I can’t hold it!  She’s breaking up!”) to Twilight’s plan “to build an exact copy of Ponyville right over there,” the patter is all fantastic.  The Trek homage is icing on the cake.  This episode (the tenth) also marks a turning point in the whole series – I think that it ushers in a whole new level of overall quality to the show.  Applebuck Season aside, for my money, this is where the whole series really comes together.  It only gets better from here on out.  And like that episode, I don’t really have much to say about this one other than go watch yourself some ponies! Good starter episode?  Totally.  Repeat viewing?  Absolutely.  Canonically awesome?  Just a bit shy of that.

Rev. Syung Myung Me: I like this one quite well, but for whatever reason it’s not a classic for me.  (Though I do like Rainbow Dash’s line “Time to take out the adorable trash”.  I am a sucker for sticking the word “adorable” in phrases, apparently.)  I think it’s that familiarity that tends to sink it for me.  Both Powerpuff Girls and Foster’s Home have done similar episodes (the latter’s was even called “The Trouble With Scribbles”).  This IS a very well done iteration of the story, but it’s still a story I’ve seen about fifty thousand times.

I love how adorable the Parasprites are, though — it’s amazing how the brain can convert a circle with three shapes into the middle into something you just want to hug and snuggle with forever.  It’s also amazing how much expression the MLP crew can get out of that same circle.  The spawning/breeding animation is pretty great, too, plus the twist that Rarity’s the only one who is initially fine with the high-reproduction rate.

Other things I like about this one is the high number of background ponies — it’s fun to see Lyra and Bon Bon in things other than fanfic.  (Though it’s kind of funny mapping the fanon personalities and characteristics.  When the parasprites eat their cakes, you almost expect Bon Bon to give Lyra a consoling hug or kiss. And poor Colgate in the background, getting her tail chewed on. Where’s Berry Punch to protect her?  Off getting drunk no doubt!)  Even the background ponies are designed well and adorably.  I think that’s why there’s so much fanon about them — they seem to cry out to be expanded upon.

Also, a bit about AJ, if you don’t mind:  I love, too, that they’ve got a Southern character — but not one who fills much of the stereotypes about southerners; she’s a farmer — but she’s not a redneck.  She’s smart, kind, accepting, and, well, just generally a good egg, seemingly the opposite of most “token Southerners” in shows who are loudmouth redneck racist dumbasses.  But then again, too, MLP takes the character archetypes and stands them on their head; as we’ll see in “A Dog & Pony Show”, Rarity may be the “girly” pony, but she’s not afraid to get shit done.

In closing, I want a one-man band set up like Pinkie’s got.  She does real well with it.  I probably couldn’t do as well, but I couldn’t do much worse than Homer attempting to “Tighten Up”.

Bridgeport Cat: It had been a while since I’d seen this episode, so a quick re-watch was in order before I wrote this review. I have to disagree with Tyger, though, as I didn’t find this episode as amusing as “Applebuck Season”. Not to say the episode was bad, not at all! In fact, it definitely got the “Sometimes you should really listen to your friends, even if they seem crazy” point across better than “Feeling Pinkie Keen”.

This episode was a great ensemble piece, and seeing Pinkie Pie shine is always a treat. As usual, the character design was great, with the Parasprites (and goodness, the cooing noises they made were absolutely adorable) being a fantastic example of the power of minimalist design. One thing I love about this episode is the animation and expressions, with the Parasprites unhinging their jaws to eat everything in sight and classic squash-and-stretch being utlized.

I wish I had more to say about this episode, but there’s not much to say other than Watch it! It’s light-hearted, fun, and perfectly goofy.