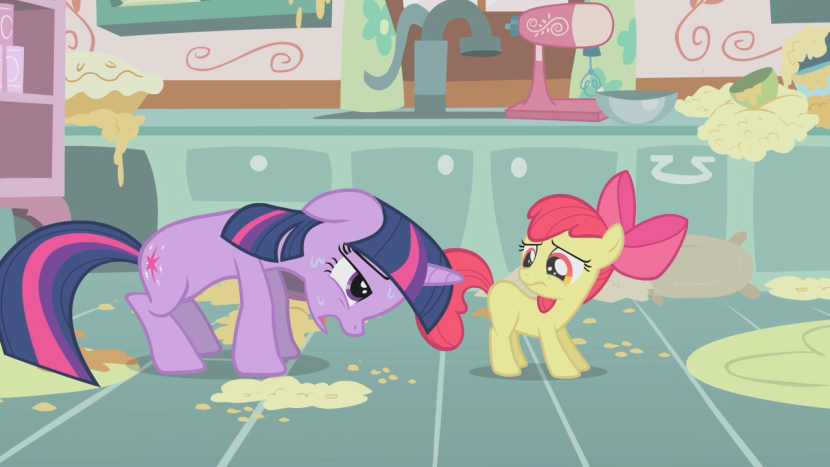 Tyger: Applebloom, the younger sister of Applejack who we first met in Bridle Gossip is back as the central character of this episode.  Young ponies receive the “cutie mark” on their flank when they discover their special talent or calling in life.  Young Applebloom has not yet gotten this coming-of-age symbol, an affliction that her class mates cruelly refer to as being a “blank flank.”  She commiserates with a classmate who similarly has not gotten her mark, but becomes even more self-conscious when they both receive invites from a haughty pair of classmates to a party to celebrate their own coming of age.  Applebloom goes to ask her similarly un-marked classmate if they wanted to go together since they had that in common, but she discovers that Twist has since gotten hers as well.  Feeling alone in her plight and desperate to get hers before the party, she participates in a variety of activities with fellow townsfolk hoping to find what her innate talent is.  None of the activities go particularly well and needless to say, her mark does not appear.  She ends up wandering into the party accidentally after deciding to not attend, becomes very self-conscious and ends up getting teased for her “blank” state.  Two other young similarly mark-less ponies come to her defense, chase the bullies off and the three form a bonded friendship, eventually dubbing themselves the “Cutie Mark Crusaders.”

This episode ushers in the only point of continuity in the series other than the Grand Galloping Gala arc that was introduced in The Ticket Master.  This is one of three “CMC” episodes, although one is primarily a vehicle to focus on the backgrounds of the Mane 6.  I’ll mostly defer the bulk of this review to The Rev and Bridgeport because while I see the importance of and certainly sympathize with stories of “not fitting in,” I have to admit to being a brony that just doesn’t care for this story arc.  There is something about it that is a little too sickly sweet, and while the youngsters of Ponyville are somewhat less irritating than typical cartoon portrayals of young children, it’s just shades of grey.  I can’t relate to or be amused by them the same way I can with the Mane 6.  It just feels different from the rest of the show.  Moreover, I find the writing and characterization to be a tad on the predictable side which is odd because the writer penned a couple of what I consider to be the strongest episodes of the whole series.  Applebloom was a perfectly fine character in Bridle Gossip, but this arc just doesn’t work for me.  Is this a good starter episode?  Putting my opinion aside, objectively I give a firm no.  The CMC arc is just too different than the rest of the show to give a proper feel for things.

Rev. Syung Myung Me: I actually like this one quite a bit.  Even aside from some classic bits (Pinkie’s “Cupcakes” song, Apple Bloom harassing Doctor Whooves into buying an apple, Berry Punch being a hilarious drunkard and drinking directly from the punch bowl), I think it’s quite well done.  For me, for the most part, the CMCs don’t end up like, well, Scrappys or Cousins Oliver.  We don’t get to see too much of Scootaloo or Sweetie Belle in this one, but Applebloom’s an actual character (which seems refreshing since so many other shows seem content to slot in Generic Cute Kid #917 and call it a day) — and Scoots and Sweetie’ll be revealed to be that way too.  Not all the CMC episodes are great, and I think there’s a bit of a pacing problem as we get a LOT of them clumped together, which probably contributes to CMC burnout amongst many bronies, but in general I dig ‘em.

The conceit in this episode is super great, too; I love how the Cutie Mark is actually a really loaded symbol.  Not only does it work as a metaphor for growing up and finding out who you really are and what you’re good at, it’s also clearly a metaphor for adulthood and (since these are girls and it’s directed AT girls) getting your first period.  I read just about all the Judy Blume books when I was very young, so I knew that that’s a big deal for girls and twigged to this right away… though I know I ended up having to explain it to Tyger, who missed the allusion.  The thing that I think is SO COOL about this episode is that the target audience probably isn’t thinking about the first period thing either — and it’s a few years off for them anyway — but I could EASILY see them remembering this show when the time comes and realize that some girls have it later than others and that’s OK.  You’ve got the upfront moral (it’s fun to learn and grow and don’t be a dick to your friends even if your special talent just ends up being that you wear a type of hat because jesus how depressing must that be) AND the secret, delayed reaction moral (it’s OK if you’re the last to get your period, it’ll come and you can’t rush it).  LAYERS ON LAYERS MAN.

As the first CMC episode, I think it’s great — lots of things going on, and, well, you end up feeling for Applebloom.  Though I do get kinda sad for Twist, considering that Applebloom kinda abandoned her once she met the other two CMCs.  Twist is pretty adorable, so I hope she comes back in season two, maybe with other friends.  She shouldn’t be lonely — but then, she does make candy, and, well, how can someone who makes candy be alone for too long.  I mean, I want some candy.

Anyway: Starter episode, probably not since the CMC arc is, as Tyger points out, a bit different than a lot of the other episodes AND it’s one of the most obviously Kid Show of the episodes… not that that’s necessarily a bad thing, especially as, well, it IS a kid’s show.  But, honestly — the CMCs could have really really been terrible, and it turns out they’re actually quite good.  Just another feather in Faust & Crew’s collective cap.

Bridgeport Cat: Being one of the few bronies that adores this episode, this will probably be fairly rambly and such (as is par for the course for my reviews so far). As Rev said, this episode hits a lot of notes that resonate with the pre-pubescent girl experience, with cutie marks acting as an analogue towards menstruation along with finding yourself. While most of the markers of female puberty are slow going, getting your period is an event that acts as a sudden thrust into the world of growing up. Once you get it, there’s no turning back, and most girls both dread and can’t wait for it.

Cutie Marks, then, can be seen as the first step of a filly growing up and reaching adulthood. Hell, the idea of a Cuteciñera certainly cements this allegory down, too, as a real-life human Quinciñera is symbolic celebration of a girl entering womanhood. From Applebloom’s eagerness to receive her cutie-mark to fit in to the ostracizing she suffers for not having her own, “Call of the Cutie” resonates really strongly with me and my own experience when I went through puberty.

However, the concept of finding yourself and Twilight Sparkle’s moral at the end always feels like a punch to the gut each time I watch it. I never really fit in growing up, and being genderqueer I don’t always fit in as an adult. What I discovered, in time, was that fitting in to some sort of unnecessary societal norm was completely useless. Twilight’s words ring true to me more than any other moral in the show: being different isn’t bad, and not fitting in because of something out of your control isn’t bad as well. You may even discover that being odd is an asset, and find some of your best friends through your own uniqueness.

This is a lesson rarely seen in kid’s shows, but it should be blasted from a megaphone at every middle school. Most shows for girls pride on getting girls to fit into some sort of easy-to-fill role, whether it be the soccer player (and it’s always soccer, isn’t it?) to the shopaholic and very little in-between. There’s never a celebration of the diversity of humankind, and if anyone is “different” they either fit in extremely well or they’re a token handicapped kids a la Wheels from the Burger King Kids Club. In Ponyville, though, the Cutie Mark Crusaders bond over the fact that they don’t fit in, and celebrate the fact that they’re different. Eventually, yes, they’ll find their cutie mark but in the meantime they’ll be perfectly fine with being unusual.

I adore the Cutie Mark Crusaders, even though their episodes tend to be some of the most despised of the series. I suppose I just identify with them, and remember being just like them growing up. I was in such a rush to grow up that I did everything I could to be an “adult,” which would often get me in trouble (reading trashy mags, trying to drink coffee, etc). While I can look back at my younger self and laugh, I think a lot of people annoyed at the CMCs may be looking at their own childhood with rose-colored glasses and forget about all the incredibly stupid shit we worried about. This episode is well-made, well-acted, and has a message that resonates right through to my bones. Being different is OK, don’t fret about it, and you may even find some of your best friends through your “weirdness.” You don’t have to fit in!