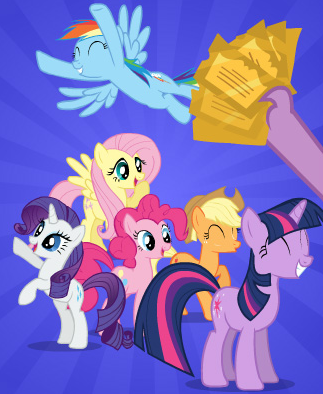 Tyger: As this is the first episode after the pilots, it eases us into things with an ensemble piece.  Princess Celestia, the ruler of Equestria and mentor to central character Twilight Sparkle, sends her favorite student two tickets to the Grand Galloping Gala – an epic annual ball/party held in the capitol city of Canterlot.  Rather than being the classic “one extra ticket and two friends” dilemma, it is a “one ticket/five friends” problem.  Each of the other five ponies have their own specific reason for wanting to attend the event.  Athletic flier Rainbow Dash wants to meet the elite flying squad the Wonderbolts, and the nature-loving Fluttershy wants to commune with the animals in the lush palace gardens for example.  So the rest of the episode features first two, then five, and eventually the entire town of ponies fighting over who will receive the extra ticket from Twilight Sparkle.

The Grand Galloping Gala event introduces one of the few points of continuity in the series.  Hasbro wanted the show to be structured such that the episodes can be watched in any order without needing to know any narrative backstory.  So while there are three episodes involving the Gala (one of them being the event itself in the season finale) with an implied order, each one functions as a self-contained episode as well.  “The Ticket Master” also fully realizes the themes that every episode is a morality play, and that all of the characters can and do act in a flawed fashion. One of the overall strengths to the show is that each one of the Mane 6 will behave poorly at various times as is apropos for their individual natures.  This makes for richer characters, conveys a more realistic message to the younger audience, and frees the viewers from the annoying “designated jerk” trope.

This episode was co-written by Lauren Faust with Amy Keating Rogers who was not only a head writer on The Powerpuff Girls, but also penned some of the stronger MLP:FIM episodes.  That said, I think that at this point the creative team was still building up a head of steam.  While there is nothing particularly objectionable about “The Ticket Master”, none of the ponies have any significant stand-out moments, and other than a quick Benny Hill nod, no really clever pop culture references.  It is, as a friend of mine and I are wont to say, “fine.”  I certainly would not suggest it as a “starter episode” and can’t even really say it has much repeat viewing potential.  Benign yet forgettable.

Rev. Syung Myung Me: Someone could argue that My Little Pony has three pilot episodes — the real pilot two-parter, and then this one.  Not only is it an introductory episode in that it’s much closer to the tone of the rest of the series, but it also introduces the main story arc of the Grand Galloping Gala.  While “The Ticket Master” is a little more enjoyable than the real pilot, it suffers from a lot of the same aspects of Pilotitis.  Unlike the true pilot, though, there are some classic bits that I even forgot were FROM this episode — “And then I said, ‘Oatmeal, are you crazy?!’” for one.  I also like Fluttershy’s “No, yes, kind of” responses when asked directly about the gala.

As Tyger points out, this one is light on pop-culture references; the title of the episode and the Benny Hill bit (done a bit better in “A Bird In The Hoof”). But then, MLP:FIM is often a bit light on pop-culture references, usually just throwing a couple in without it weighing down the story.  We’re not watching Family Guy here, and thankfully so.

Again, lots of cool design work in the episode — I love the Carousel Boutique logo on the changing screen, as well as the “Prince Blueblood and Rarity fall in love” mouth-wiggle in her fantasy sequence.  Flash animation for TV seems to be awfully hard to pull off right, but Faust’s crew nail it — which makes sense, considering they also did Foster’s Home For Imaginary Friends which I always assumed was a mix of cel and Flash animation until I found out it was only the latter.

That said, this is another episode to pick up once you’ve gotten good and hooked on Pony.  It’s not one of the best, as the writing is still finding its footing, but there are definite leads as to what the show would become.

Bridgeport Cat: You’re right, Rev, this episode feels like a second pilot. Not a bad episode, not in the least, but it’s definitely not as fast-paced and funny as later ones. It serves an important purpose (introducing the Grand Galloping Gala and expanding on the ponies’ personalities), but it feels overburdened with these tasks and definitely runs slower.

It DOES, however, do a very good job of expanding more on the ponies purposes/lives in Ponyville, and I loved Twilight Sparkle’s growing exasperation at her friends self-serving niceness. Each of the Mane 6 has a genuine reason to want to go to the Grand Galloping Gala, with Pinkie Pie’s being my favorite (She loves parties, so she HAS to go to this party of COURSE what are you THINKING). I also like how they introduced Applejack’s business savvy, something that you rarely see in female characters on kids shows. While most girl’s shows have girls raising money through babysitting/lemonade stands/stereotypically feminine jobs, Applejack is seriously interested in making stacks of cash for both altruistic/selfish reasons through hard physical work/salesmanship.

This episode also has lovely little touches to it that establish that the ponies are a lot more like real horses than just their physical appearance. This is especially true of their diet, as Twilight Sparkle munches on a daffodil sandwich and is offered a tasty salad as a gift from Fluttershy. Of course, this magical realism is broken by the pegasus pony Rainbow Dash controlling the weather so that Twilight Sparkle can better enjoy her flower-laden lunch, but it’s these little touches that make the show shine brightly in the wasteland of toy-oriented cartoons.

All in all, while The Ticket Master is a solid episode for any cartoon, it’s just a fair-to-middling episode for MLP: FIM. It helps establish the pony universe, but doesn’t really do anything truly memorable when compared to the rest of the season.