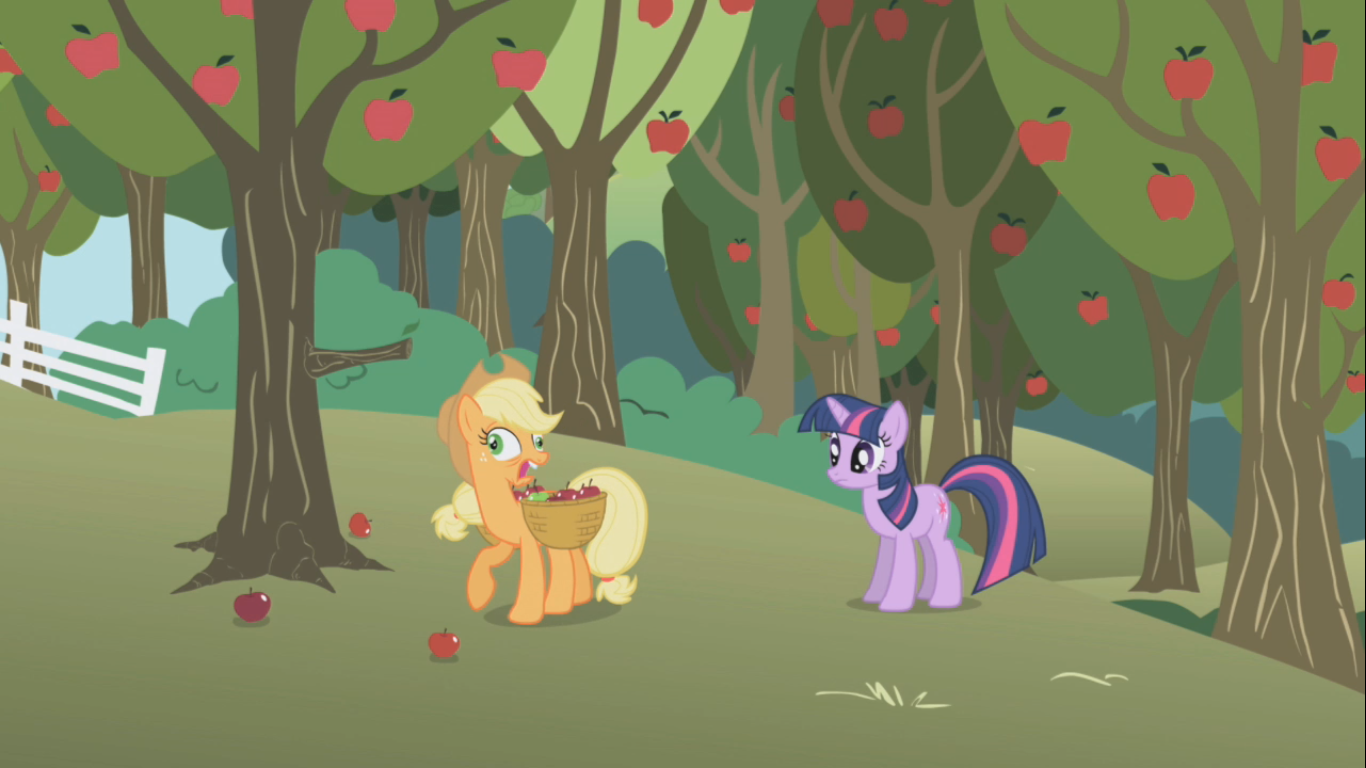 Tyger: Now that we have gotten past the pilot episodes (and the might-as-well-be a pilot episode “The Ticket Master”), we finally get to a rich creamy mainstay of the show – a “character focused” episode.  In “Applebuck Season,” the honest and hard-working Applejack is posed with the task of harvesting her entire orchard of apples without the help of her extended family, or her older brother Big Macintosh who is convalescing from an injury.  Her personality being what it is, she’s not going to accept any help “from nopony, nohow” to help with the Sisyphean task.  As things play out, not only does her stubborn refusal to accept help from her friends make her own task needlessly impossible, but her increasing weariness also impacts pre-existing commitments she has made to other members of the cast.

Rev. Syung Myung Me: This is the first truly great episode of the series.  While all the Mane 6 are involved, it focuses most on Applejack — and the stubbornness that is the flipside to her strength and self-reliance.  That, and it’s got Derpy Hooves’ one speaking role, so you can’t go wrong there.  The moral of the episode is perhaps spelled out a little bit too clearly in the cold open — and we can kinda figure how the episode is going to go, but getting there is fun.  Just because something might be obvious doesn’t mean it’s necessarily bad.  (Though, perhaps a little touch of subtlety could have been used rather than having Big Macintosh explicitly state what Applejack’s gonna learn in the next 22 minutes.)

One of the things I don’t know if we’ve addressed — I love how it’s only Pinkie Pie who has access to hammerspace.  She’s the only one with popcorn or the apple-flag out of nowhere.  It makes the show that much more special, having one fourth-wall-breaking pony without any real attention called to it.  In fact, I’m not sure if you necessarily NOTICE that it’s ONLY Pinkie doing the traditionally Looney Tunes-ish kind of stuff; it just fits in, and it seems to only be on the re-watching that you pick up on that.  There’s a little bit of plasticity to the other ponies – in the last episode, Fluttershy had a particularly long, bouncy neck (but only in her fantasy), and Twilight can take a whole heap of abuse (viz. “Feeling Pinkie Keen”), but only Pinkie has the full capacity of her cartoon ancestry.

The expressions in this episode are a cut above; Rainbow’s “SOOO AWESOME!!” face (not to mention her eye-acting during the entire speech) as well as the Exhausted Applejack facial designs are so communicative.  It’s these touches that make the show so repeatedly watchable.  Not only is it entertaining, but it’s quite aesthetically beautiful as well.  The writing (again from Amy Keating Rogers) is top-notch.  As the episode goes on, it’s great to see how progressively burnt-out Applejack gets, to the point where when it comes time to help Fluttershy, she’s downright surly.

This is the first episode that would be a good starter episode; in fact, in showing a few episodes to a friend for the first time, this was the second or third episode I played for him, alongside “Suited For Success” and “Sonic Rainboom”.  It seemed to do the trick — he ended up a fan.

Tyger: While episode does not quite rise to the level of what Rev. Me and I have grown to refer to as “Canonically Awesome,” this is certainly the first really strong episode of the series.  I watched the series in broadcast order after the first season concluded and this is the one that made me go “OK, yeah, I’m on board with the ponies.”  The central story, character expressions, dialog, and physical comedy (like Applejack running upside down while trapped on a cart) by the various ponies really hit a stride in this episode.  And the way her increasingly deteriorating state keeps messing up her pre-existing plans with the other ponies puts this episode over the top.

This episode might not be Canonically Awesome (and if not, not by much), but it certainly is an excellent “starter episode,” and has definite replay value.  This is one of the episodes that just makes me smile.  I’m surprised I have to little to say about this one as much as I like it other than perhaps “just watch it already.”  As noted by Rev. Me, yes, the obvious moral/message of this episode is telegraphed loud and clear pretty much from the get-go.  But so what?  It’s not about the destination, it’s about wooo-wooo-wooo, catapult antics, toxic muffins and a stampede of baby bunnies.

Bridgeport Cat: I love this episode. This was the episode that made me realize that I was watching something important, something that was going to be big. There’s so many good things about Applebuck Season that I know this is going to get rambly, so bear with me.

Shows written for girls tend to suffer the same drawbacks as shows written for toddlers: dumbing down, simplification, and a lack of action. While one can argue that a show written for the very young needs to be written for, well, the very young and lack the sort of fast pace and physical comedy older kids get, there’s no excuse aside from traditional corporate sexism that girl’s shows don’t get the same fun stuff shows for boys have. “Applebuck Season” is a shining example of how MLP:FIM finally gets shows for girls RIGHT: It’s got a good message that girls don’t often hear AND it’s absolutely hilarious for anyone of any age group/gender.

Girls shows tend to be slapstick-free because of the presumed weakness of girls, but MLP:FIM pulls out all the comedy/animation stops and works within the field of elasticity and, as Rev said, hammerspace. You can tell that Faust and Co. are coming from a strong animation background, and are working without the typical restrictions seen on girls shows (no slapstick, no physical comedy, etc). Seeing Applejack become more and more physically inept/exhausted as she fumbles through the episode is a real treat, and while the message is fairly obvious, it’s also incredibly important.

Often in all popular media, whether the show’s for girls or boys or adults, the strongest characters are both completely physically and mentally capable. Modern Feminism teaches the opposite, that there are many ways to be a strong and capable person without falling into a buff and sane stereotype. The idea that one MUST be physically strong to be a capable leader/good person will always benefit a select few and teach girls that they’ll never be as strong as boys. You can go and show girls as physically stronger than boys to combat this, but that still will only benefit the physically capable girl and put those with a physical/mental disability at a disadvantage.

Applejack IS physically strong, and a very capable person. So are her less physically strong friends, but she refuses to acknowledge her own weaknesses/the strengths of her own friends. It’s only when she realizes that admitting you need help isn’t a weakness, but a strength, that things start to work out for her. Needing help from others, whether it be through charity or just someone to talk to, doesn’t make you weak. It takes a strong person to admit that you need help, and as someone with a mental illness I can rah-rah stand behind this message 100%.

“Applebuck Season” is an entertaining episode with a very important, rarely heard message in American Society: Being “weak” doesn’t make you weak. The collision of comedy and message in this episode epitomizes everything I love about MLP: FIM, and it’s an absolute must-see for anyone who likes good cartoons, period.