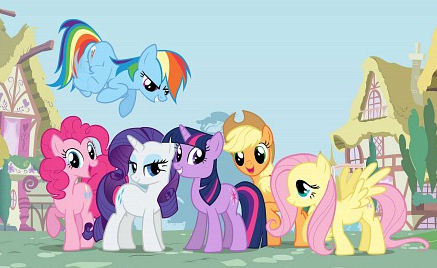 Tyger: While the obviously talented and insightful executive producer Lauren Faust wrote the two pilot episodes, it could be argued that they are some of the weakest episodes of the whole series and might not be the best “starter points” if one wants to introduce a friend to the show.  In all fairness, pilots for most TV shows rarely rise to epic quality (The X-Files?) and even with fan-obsessed shows like Buffy the Vampire Slayer, many die-hards tend to to “meh” about the pilot.

That said, the MLP:FIM pilots are the setup for the rest of the show.  The first episode (of two) serves no purpose than to introduce the cast (a.k.a. The Mane 6).  The series “point of view” character Twilight Sparkle, her need to be more social, and the other 5 characters that she will eventually befriend are given an introduction.  Nothing brilliant but useful viewing in the grand scheme of the show.  The ultimate scene of the first episode sets up a “point of conflict” which leads into the the second episode by giving the Mane 6 a course of action.

Since the subtitle of the show is “Friendship Is Magic,” it comes as little surprise that the point of conflict introduced in the first pilot episode is resolved by each member of the Mane 6 contributing their own unique “Element of Harmony” to resolve the aforementioned point of conflict.  They are like a Voltron-esque combining mecha, only made from ponies.  And while the way the second pilot episode plays out is pretty predictable, even to a new viewer, the wrap-up is still quite sweet and satisfying.

Both pilot episodes should be considered required viewing to understand the setup of the world and the primary cast.  The first episode is similarly responsible for the ever-popular “10 seconds flat” memephrase.  However, depending on the wants, needs, desires (and patience) of a new viewer, the pilots may or may not be the best place to start.

Rev. Syung Myung Me: I agree — the pilot’s one of the weaker episodes; but then, they almost always are.  The problem with pilots is that they’ve got to set everything up; all the boring “this is who everyone is and what they’re like” stuff.  The splash panel of the MAD satire where everyone just states their name, rank and favorite one-liner.  That said, I’ve seen a lot weaker pilots for series that are just as good as MLP:FIM.

The story is, though different than pretty much the entire rest of the series, pretty strong.  And, I’ve seen people say online that they’re surprised that at the end, Nightmare Moon is vanquished and she’s not sticking around to keep hucking monsters of the week at the heroes.  I know one of Lauren Faust’s original ideas was to do a more adventure-based show, but the rest of the series is a more slice-of-life show — and I think that was definitely a good move.  (Not to say that Faust can’t do action; she was one of the leads on Powerpuff Girls, fer Celestia’s sake.)

Still — as a pilot, not only does it introduce the characters we’ll all get to know and love, the high quality of the technical aspects of the show are likewise introduced.  Did you notice on your first viewing how, in the beginning when the character of Nightmare Moon is introduced, she appears as a distortion of a pony statue through the giant hourglass in Twilight’s Canterlot quarters?  I sure didn’t.  That’s subtle, amazing and subtly amazing.

While I probably wouldn’t introduce a future fan to the series with the pilot, you could definitely do worse… after all, that IS kinda what the pilot’s there for.

Bridgeport Cat: Unlike most bronies, who came in after the winter break, I started watching MLP:FIM from the first episode back in October. I have a soft-spot for slapsticky, goofy cartoons with talking animals and I’d heard good things about this from a few furry friends of mine. So while most people found the first episodes to be weak compared to the rest of the show, I didn’t mind as much since I started out with them.

Tyger and Rev are right,  though, that these two are relatively weak compared to the rest of the season one. Pilots, especially pilots for ensemble shows like MLP:FIM, tend to have the daunting task of establishing the quirks and personality of each character while still telling a compelling story. The Nightmare Moon arc does this well, using Twilight Sparkle as the newcomer in a strange town to introduce each pony. Of course, since this is still a pilot, we only get a simple taste of each of then mane cast’s personality, and some of them fall flatter than others. Rarity, for example, comes off as hoity-toity and rubbed me as a typical “girl show” character in the pilot, while in later episodes she’s evolved into a well-rounded fashion designer diva-type who’s an absolute gem.

In several interviews, Faust has come out as to say that she definitely used her feminist background and beliefs when creating MLP:FIM, and as a feminist myself I can say it absolutely shows. However, unlike other “Yay, girls!” in which the female leads clonked the viewers over the head constantly with tried-but-true platitudes, Faust lets her ideals act as a backbone and doesn’t turn the ponies into talking heads. The one idea that cements the show is that there are several ways to be a strong woman, and several ways to be a woman period. In the pilot, we see that each of the mane cast is distinctive but different, yet they all get along in (ahem) Harmony.

The concept of the Elements of Harmony can be boiled down to the idea that each person’s quirks and interests and personality is absolutely ok and in fact beneficial to society. Fluttershy is painfully timid and seen as stereotypically weak, but she still saves the day when the time comes without breaking character or punching anyone. Each pony has their own strengths and weaknesses, and none of them are weaker than the rest. The pilot drove this idea home, and while later episodes expand on the “no wrong way to be a girl/person” concept the Nightmare Moon arc lets the audience know that this will be the driving message behind the show, so like it or lump it.