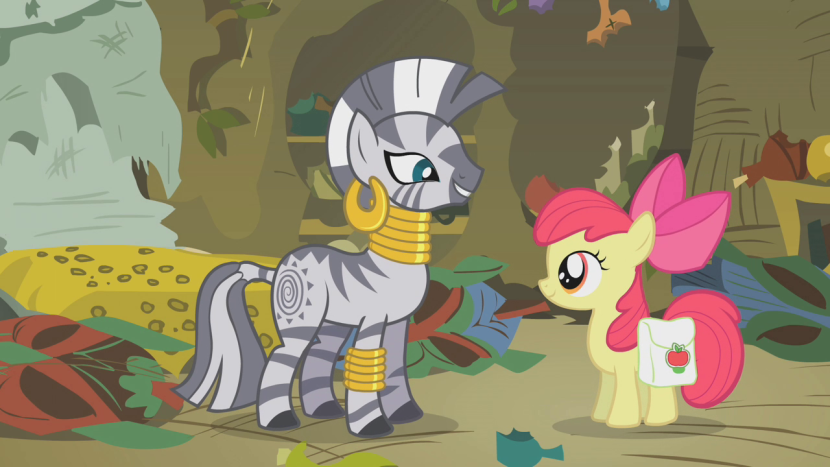 Tyger: Ponyville is too quiet and Twilight Sparkle soon figures out why – all the ponies are quietly hiding in their locked homes homes.  A strange looking and by all accounts “sinister” outsider named Zecora has come to town and the citizens are hiding lest they suffer any manner of undisclosed harms from the supposedly malevolent stranger.  Twilight informs her friends that Zecora is a Zebra and is from somewhere far away, and not a “strange looking” pony.  Both Twilight and Applejack’s younger sister Applebloom express skepticism about these rumors which are long on innuendo and short on substance.  Perhaps she is just being neighborly?  Applebloom sneaks out of the house to follow Zecora back to the mysterious Everfree Forest, and when the rest realize this, they pursue the young pony.  They catch up with the pair at the edge of the forest and stop Applebloom from continuing.  As they pause at the edge of the forest in a patch of flowers, Zecora turns around and offers an ominous warning in rhyme that they must turn back or be doomed.

The next morning each of the Mane 6 wake up with a mysterious (and hilarious!) malady and come to the conclusion that they cursed by the eerie Zecora.  The young Applebloom blames herself for the turn of events and defying her (now miniaturized) older sister, heads back to the forest.  The rest of the cast decide to pursue to directly confront Zecora.  When they reach her home they see it is decorated with strange looking art and witness Zecora leaning over a cauldron and chanting.  Fearing the worst, they burst into her house, whereupon the steering-challenged Rainbow Dash pretty much trashes the place and wrecks the brew she was working on.  They angrily accuse Zecora of cursing them and she replies, “you destroy my home, destroy my work and then accuse me of being a jerk?”  Applebloom enters the abode, having been helping Zecora gather herbs for the brew she was working on.  As it turns out, Zecora is a kind and welcoming host who was preparing a cure for their “curses” – which were caused by the “Poison Joke” flowers at the edge of the forest which she tried to warn them about.  Seeing the reality of the situation, the ponies feel very bad about prejudging the situation, bring Zecora back to Ponyville to get the last ingredient that she needs for the curing bath and introduce their new friend to the citizens of the town.

Zebras are African equines, Zecora’s home decor, personal adornment and cutie mark resemble African tribal art, she is a wise-woman/healer, and speaks in the sort of rhyme commonly associated with the Caribbean African diaspora.  Stating the obvious: Zecora is black, the main moral of the story is “don’t be a racist” and this episode has sparked no small amount of controversy in the fan community.  While nopony will debate the worth of the central moral (unless they suck) many people are uncomfortable with the portrayal of Zecora and feel that the character is dangerously close to the “magical negro” stereotype.  This is one of two contentious “race episodes” but in the case of this one, I defend the decisions that were made.

To have a morality play about race an “other” character is necessary, different from the primary group but still recognizably similar to said.  The creators have carefully set up a world where all ponies are equal and presided over by a ruler than incorporates the traits of all of her subjects, making it difficult to use a pony for this role.  Zebras are pretty much the only other modern equine species and as MLP:FIM is a US TV show, they do indeed “come from a faraway land.”  This decision makes sense to me.  Her foreign-looking trappings such as the tribal masks were perceived by the ponies as threatening, but they actually had benign meanings such as “welcome.”  Her rhyming speech has a real world corollary in Caribbean/Creole culture, a form of clever wordplay that is analogous to renaissance Europeans speaking in puns.  And the practice of folk medicine is part of the traditions of these diaspora cultures.  All of these things are realistic and the character is not portrayed in any negative fashion.

As far as the “magical negro” accusation goes… well, yeah, maybe so.  However, that is a theme that has also been explored by respected African-American authors like Toni Morrison (Song of Solomon).  This raises a thought-provoking question: when is something a stereotype (a phrase with negative connotations) and when is something an archetype?  I think that this is an important distinction.  As long as the subject is treated with realism and respect, does it matter who writes about it and if so, why?  If Morrison or even European writers like Neil Gaiman (Anansi Boys) can write about Afro-Caribbean wise-women without getting the crap kicked out of them, then why not MLP:FIM?  After the rather dodgy history (an understatement) of the portrayal of race in cartoons, I really can’t see any issue with a modern cartoon addressing the issue of racial differences and prejudice in a head-on and realistic fashion.  Or as the bookish Twilight Sparkle says at the end, “real friends don’t care what your cover is.”

All meta aside, is this episode a good cartoon about ponies?  Pretty good really.  Zecora has a pleasing character design and her voice acting fits very well.  The sight gags with the curses are really well done – hearing Fluttershy suddenly speaking like Barry White almost made me fall out of my seat.  The look on her face when the mute Pinkie PIe makes her sing a bluesy number about Zecora is the icing on the cake.  New settings like the Everfree Forest and Zecora’s home all have good art design.  I don’t think this makes for a good starter episode.  And while not one of the strongest episodes (other than the controversy that it generates), it is a pretty good watch.

Rev. Syung Myung Me: This is one I liked MUCH better on the second viewing — mainly because I was caught up in a lot of the controversy that Tyger states.  Part of it was my own ignorance — I didn’t realize that the speaking in rhyme was a real thing (and clever, too), so I thought that just heightened the “otherness” and the whole “magical negro” thing.  Which, again, too — Tyger’s got a good point on stereotype versus archetype.

With that baggage removed, I could really see this one for what it was — a great episode with a great new character.  The maladies of the Poison Joke were pretty hilarious (as were Spike’s names — particularly Appletini), and well, I could watch a whole episode of Flutterguy.  This really is a hilarious epsiode, and one I wish I’d twigged to sooner.

I really don’t have too much more to add, other than that I learned a lesson, too.

Today I learned not to have a knee-jerk reaction to anything about race and actually finding things out before thinking things are racist.  Sometimes it turns out the people did way more research than you did, and it turns out that you’re the ignorant one.  Also, ponies are funny.

Bridgeport Cat: Oh man, I have a lot to say about this episode too, so hang on. I honestly had no clue about Creole and etc. cultures having a history of using rhymes, and knowing that does help make me feel better about adoring this episode. One way they could have portrayed otherness would have been to make an entire culture/creature out of whole cloth, but in a world where pink and purple ponies perform magic and fight dragons, what really CAN be shown to be different and odd to the ponies?

Apparently, realism is the one thing the ponies fear the most, as shown by their reaction to the Everfree Forest. Each of the mane 6 (not including the knowledgeable Twilight Sparkle) talk of the Everfree Forest being a sinister place where the animals care for themselves, plants grow on their own, and the weather works in cycles without the assistance of a certain pegasus pony. The joke, of course, is that this is all incredibly normal and far from evil or bizarre.

The audience, too, would have an easier time seeing the ridiculousness of racism by having the “otherness” portrayed as something that they might actually encounter in real life. If the “spooky pony” had something like giant fangs and farted out centipedes, it would make far more sense that the other ponies were frightened of her. By having Zecora be more in line with a realistic amalgam of West African/Caribbean parts, it seems even more ridiculous to the average human viewer that anyone could be scared of her. It’s not completely untroubling, of course, and I don’t begrudge anyone being uncomfortable by this episode. But I can understand where the writers were coming from, and this is one area that I think that is impossible to do without at least some problematic elements.

On to the message itself! While it’s a very obvious “Don’t be Racist” message, what I adore about this episode is that it goes beyond the typical “Just because they’re a different race doesn’t mean that we’re not exactly alike.” Zecora IS different, because other cultures are different and we’re not at all exactly identical. The message is that not only is it OK to be different, but each culture has something beneficial to bring to the table. In Zecora’s case, it was her own brand of folk remedies that saved the day.

This isn’t just a WE’RE ALL ALIKE message, this is a firm endorsement for the racist bogeyman of multiculturalism. I love how even after finding out that Zecora’s masks are completely benign that Rarity is still grossed out by them, because that’s a realistic reaction to something like another culture’s fashion or design sense. You don’t have to LIKE it, you just have to understand it and realize it’s harmless. I also love how the typical-intellectual Twilight Sparkle, even with all her knowledge about other cultures and her own presumed tolerance, still falls victim to her own suspicions and feelings of cultural superiority. In the end, all the ponies learn that just because a culture seems scary and different, once you get to learn about it you’ll realize that it’s harmless.

Very few kids shows tackle the issue of different cultures legitimately appearing scary to young kids, and I think that Bridle Gossip handles this incredibly well. In fact, one can go as far to say this episode is more about the specter of Islamophobia than vanilla Racism. From the ponies finding Zecora’s chanting “menacing” to seeing her dress and masks as “evil”, it’s very obvious that this is more “Learn about other cultures before you judge them” than just “Look beyond the color of someone’s skin”. It’s incredibly refreshing to see the purported arguments against multiculturalism successfully thrown down at the hooves of magic sparkle ponies.