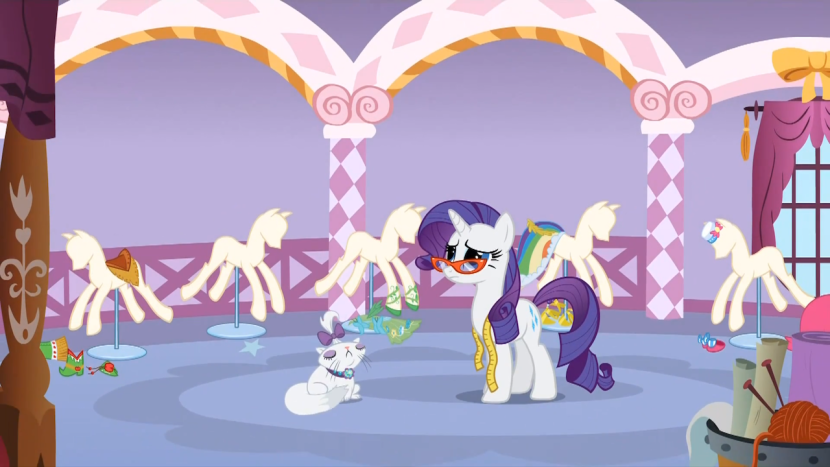 Tyger: Rarity is in her shop preparing to make herself a new dress for the upcoming Grand Galloping Gala.  Twilight Sparkle and Applejack come in and Rarity is mortified to learn that they both intend to wear a threadbare dress and work clothes respectively to the Gala.  She tells the other two that she will make them both new outfits.  When Rainbow Dash falls through the roof and into a pile of fabric, Rarity gets another idea and, being the Element of Generosity, she decides to make a custom tailored gown for all of her friends.  She sets to work making a unique outfit that will capture the spirit and personality of each of her friends and after a flurry of non-stop activity, brings them to her shop to unveil her creations.  They thank Rarity for her efforts saying that the gowns are “nice” and that they liked them, but their lack of enthusiasm does not go unnoticed and she gets them to concede that the gowns were not what they were expecting.  She wants the others to love her gifts, and insists on redoing all of the outfits to be exactly what everypony wants even though it is a great deal more work for her.  She endures the new wave of work keeping her patience with everything from Twilight’s exacting instructions that the stars on her gown be astronomically correct, to Rainbow Dash’s frustratingly vague demand that hers “needs to be about 20% cooler.”  And while the ensuing “committee-made” dresses were truly ugly, she made them because that’s what her friends wanted.

After completing the new dresses, Spike comes in and informs them that he passed along the fact that they were having a fashion show to Hoity Toity – the premier fashionista in the capitol city – and that he would be attending.  Everypony thinks that this is great news except for Rarity.  The fashion show with Spike as the announcer happens and does not go well because of the horrid new dresses she made for her friends.  Ashamed, Rarity hides and refuses to come out of her house and ponders going into exile until her friends trick her into coming outside.  They show her that they completed the design for her original gown with the help of Fluttershy’s freakish and unexplained knowledge of sewing, and apologize for their ingratitude.  Spike convinces Hoity Toity to come back for a second chance, and they have a new fashion show with her original designs and Rarity wins the day.

With her fussiness and occasional egotism, it’s easy to forget that Rarity symbolizes generosity.  While I shall admit that she is not one of my favorites, she really does shine in this episode.  Suited for Success also features “The Art of the Dress,” another of a handful of popular musical numbers in the series.  It isn’t my favorite, but that is not a universally held opinion among the fans.  There are some really good moments in this one.  From the popular “20% cooler” quip from Rainbow Dash, Rarity’s “I want to wallow in…whatever ponies are supposed to wallow in,” and Fluttershy’s bizarre sewing rant, there are some good bits of dialog here.  There are also some good animated sequences as well, with the “Mane 6 personalities” montage in the second show being particularly good.  I like the two morals as well.  The obvious one “that one should not be critical of something generously given” is a good one, but the more subtle one that “pleasing everyone, pleases noone” is a more nuanced one.

While Rarity is the central character, there are ensemble elements to this episode and everypony gets a moment or two to do her thing.  As noted before, I’m not a Rarity fan, but this episode does a great job with bringing out her positive side and I walked away with a better view of her.  That said, I just don’t seem to love this episode as much a seeming majority of other fans do.  This is a good episode but not in the top tier, or at least, not mine.  Good starter episode?  One could do worse, but one could do much better as well, so I would say do better.  Repeat viewing?  Depends how much you like Rarity or her song.

Rev. Syung Myung Me: Oh, man, we are gonna have to disagree.  This is one of my all-time favorites. It’s one I can watch over and over and over and have.  And in fact, it’s one I’ve used as a starter episode before, and it worked!  SO THERE.

Seriously, though, this one is just amazing.  I’ve really come around on Rarity; she’s still not my favorite pony, but she’s pretty dang awesome.  And it’s funny how some of the Rarity episodes are the ones that really shine.  “Art of the Dress” is up there with “Winter Wrap Up” or “At The Gala” for me — and more so when I found out that it’s a bit of a pastiche of “Putting It Together” from Stephen Sondheim’s Sundays In The Park With George.  And, well, so many things going on in this episode that just make me happy.  There’s the song, which is amazing, as noted — the “all we ever want is indecision/all we really like is what we know” lines and, of course, “20% cooler”.  (Not to mention “though it rides high on the flank/Rainbow won’t look like a tank”, which cracks me up every time.  Or Pinkie Pie shrieking “DO IT!”.  Or, well, just the entire thing, really.  I can’t talk enough about this song.)

Aside from the song — the voice acting is amazing; Tabitha St. Germain, who does Rarity, is completely on all cylinders in this episode.  “Aren’t you going to tell me to change something too?” is such a great reading. And, of course, there’s the “wallowing in what ever it is ponies are supposed to wallow in” line.  She really nails the frustration while trying to be professional and friendly — all while wanting to snap their little pony necks.   And, great writing as always — I love Pinkie’s worry that Rarity will become a crazy cat lady.  (“She’s only got one cat!” “…give her time…”) The animation is particularly good here, too — the transitions in the real fashion show are so beautiful.

Bridgeport Cat: “Suited for Success”, when combined with “Applebuck Season”, is my basic one-two punch for creating new bronies. There’s so much I love about this episode, and it’s my absolute favorite of the first season. “Art of the Dress” is the only pony song on my mp3 player, and I’ve seen the episode at least 5 times. No matter how many times I rewatch it, it never gets old to me.

When I first saw Rarity on MLP:FIM, she was my least favorite pony and I felt she was shoe-horned in by the folks at Hasbro so that there was a “fashion” pony to exemplify what they thought girls wanted/liked. However, the writing/animation team really made her their own and through excellent voice-acting and great characterization. This episode cemented her as one of my favorite ponies, portraying her less as a shopaholic and more of a 40’s movie diva. She’s a blast on screen when she’s hamming it up, and I can’t imagine the show without her.

Every animated series worth its salt has an episode mildly parodying their own industry, and this one seems to be making fun of the development process of cartoon shows. From the ponies bemoaning the budget (even though they’re getting the dresses for free) to Rainbow Dash’s non-specific request that her dress be 20% cooler (which immediately reminded me of the Poochie episode of the Simpsons), the whole thing felt like a lighthearted dig at corporate meddling in the industry.

Their’s so much to love about this episode, from the huge musical number to the dress designs to Rarity chewing the scenery as she wallows in pony pity. Watch this right after “Applebuck Season”, and you’ll be hooked.