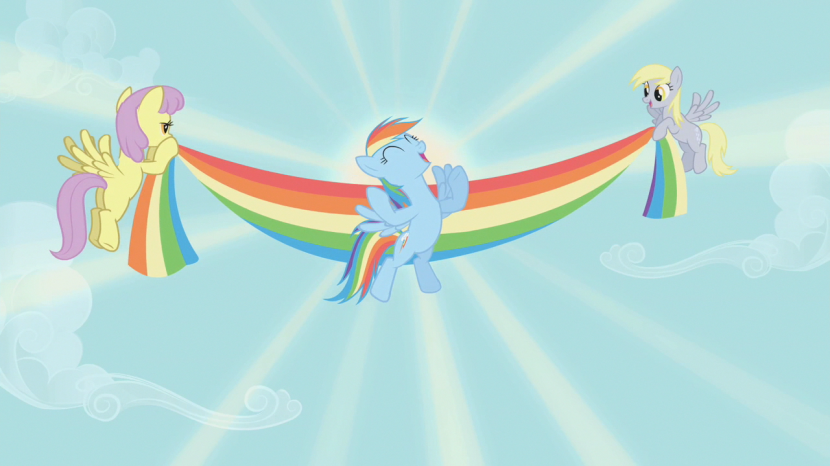 Tyger: Close pals Applejack and Rainbow Dash enjoy a friendly game of horse shoes and the requisite trash-talking that goes along with it down on the farm.  While it looks she might not win, Applejack pulls it off with a perfect shot at the end.  Rainbow Dash says that she “hates losing” and the two begin to good-naturedly (mostly?) verbally spar over who is the better athlete, which results in Dash challenging Applejack to an “Iron Pony” competition to determine who is the best.  The two compete in a variety of physical challenges, initially running neck-and-neck, but in the end Rainbow Dash gains the advantage due to her wings.  Applejack accuses her of cheating, but since Dash is a Pegasus and there was no “no wings” rule, it didn’t occur to her to not use them.  At this point neither of them are happy with the outcome of the competition, so Applejack challenges her friend to participate in the Running of the Leaves – a yearly Ponyville race with the stipulation that Rainbow Dash not use her wings.  The two spit-shake on it and the race is on.

The race is similar to the Winter Wrap Up in that it is another example of ponies manually changing the seasons – in this case the race ushers in the end of Fall by causing the leaves to drop from the trees.  At the starting line, Applejack ties Dash’s wings up to ensure fair play, and they are both surprised to see that the studious Twilight Sparkle intends to run the race as well.  Twilight wants to participate to learn more about her new home, and both of the more athletic ponies tease her after learning that she has only read about racing.  The race commences with Pinkie Pie and Spike acting as announcers, and it starts off well enough.  However both rivals end up tripping due to not paying attention and are quick to blame the other for their lack of observation.  Twilight points this out to each of them in turn, but Rainbow Dash can’t quite let it go, which causes her to snap a low-hanging branch in Applejack’s face to gain the advantage.  The gloves to come off and the two rivals employ ever-escalating dirty tricks to ensure a win, with the final sprint to the finish line becoming an all-out brawl.  When they finally cross the finish line they learn that not only have they tied for last place since they wasted so much time with their conduct, but also that Twilight won a 5th place medal since her research taught her how to pace herself.  Seeing Princess Celestia at the finish line causes the rivals to become ashamed of for their unsporting behavior.  The Princess points out that not all of the leaves have been shaken from the trees and the two fast friends go on one last run together to finish the job.

Since Rainbow Dash is clearly the best pony, and Applejack (along with Fluttershy) is obviously the other best pony, showcasing them both can’t help but be awesomesauce.  Subjective pony allegiances aside, this episode just does everything right.  The dialog and voice acting, from the rivals’ constant smack-talk to Pinkie Pie acting as announcer is hilarious, and the facial expressions are top-notch.  I’ll never get enough of Rainbow Dash blowing raspberries.  Moreover, the action is an amazingly well done love-letter to the classic era of TV animation.  The whole “race with dirty tricks” setup is absolutely classic, and is a perfect vehicle for a cascade of sight gags.  The Looney Tunes reference when an eluded swarm of bees forms a “!?” was wonderful.  And the careful viewer might notice that Twilight Sparkle’s racer number was “42,” surely not a coincidence as she is the show’s token geek.

As in other episodes, the writer was not shy about letting the main characters show their less than noble sides.  Even after Twilight points out that Rainbow Dash’s fumble was her own fault and not a trick, her competitive nature led her to not only resort to trickery, but also to play along with Twilight to save face while being observed.  On the other hand, Applejack was not exactly the model of a gracious winner and it didn’t take too long for her to retaliate in kind.  While the Pegasus did gain an edge with her wings in the Iron Pony competition, it was also clear that Applejack didn’t like losing either.

There is no nuanced layering of morals here, nor is there any particularly complex character interplay. This is a simply a jewel of pony hi-jinx with note-perfect comedic timing, copious shout outs to the “classic era,” and just happens to showcase two out of the three best ponies on the block.  A starter episode?  Wholeheartedly yes.  Repeat viewing?  I’ve certainly watched it as much as “accepted classics” like Winter Wrap Up, etc.  Final verdict: canonically awesome — not a universally held view but it is mine.

Rev. Syung Myung Me: This actually WAS my starter episode, so yeah, it seems to work pretty well for that.  It’s a pretty straightforward episode, but that’s not a bad thing.  Lots of classic cartoon references, and, well, I love the interplay between Spike and Pinkie from the balloon.  It’s just about impossible to keep up with Pinkie Pie, and there’re few better examples than this.  (And there’s lots of wordplay, too — like Pinkie’s rapid-fire rhyming about fudge and pudge.)

This is a fun episode, and since AJ and Dash are the two most boisterous ponies, it moves along at a good clip.  And it’s probably one of the sources of the AppleDash shipping fics out there, too, particularly with the, ahem, wingbondage.  I don’t think that’s canon, though.

Honestly — I think Tyger really said it all; I just don’t have a whole lot to add on this one.  It’s a great episode and a fun one.  Definitely one of the upper-level episodes.

Bridgeport Cat: While I like to thump my chest and loudly crow about how this show is a bright spot of feminism in a dreary world, it’s episodes like this that let me know that at it’s core it’s a comedy show starring ponies. Don’t get me wrong, I adore this episode and everything about it, but it’s definitely not one I can write paragraphs about. Comedy will always be this show’s strong suit, and there’s a lot of great jokes and sight gags to relish.

I loved Pinkie Pie’s commentary with Spike, and his increasing befuddlement at her “Boom Goes The Dynamite”-esque announcing. Pinkie Pie is the Joe Morgan of pony commentary, it seems! I also liked the inclusion of wacky slapstick, as it’s always refreshing to see female “actors” doing slapstick in a kid’s show. So often, we’re so overly protective of women (as a sign of the semi-patriarchal state in which a woman is too weak to do anything, natch) that female slapstick is considered verboten in kid’s shows. It’s really a bright step forward to see such a slapstick-driven show in which it’s the girls doing the pratfalls instead of being the constant straight-man.

There’s not really much I can say about this episode that hasn’t been said. It’s simple, it’s funny, and it’s a nice little moral about not letting your drive to win overtake your love of your friends. A good episode for kids and adults alike, “Fall Weather Friends” is a fun little ride that’s a good starter episode for non-fans.