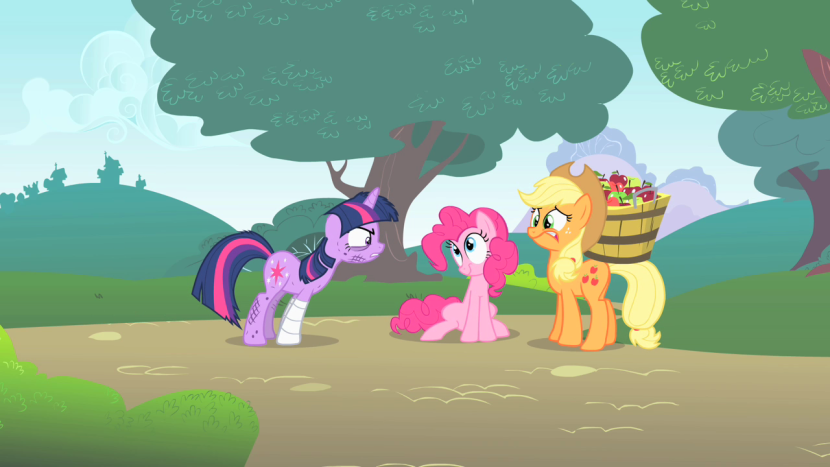 Tyger: While practicing magic with Twilight Sparkle, Spike keeps getting distracted by Pinkie Pie engaged in some odd antics nearby.  When they go talk to Pinkie, her tails starts twitching and she warns them that something is going to fall from the sky – and a frog falls on Twilight’s face.  Fluttershy is overhead with a cart full of frogs it seems.  Apparently whenever Pinkie experiences a variety or combination of uncontrollable physical tics (her “Pinkie Sense”), it portends some sort of impending misfortune and even the town-to-earth Applejack knows that it’s time to take cover.  The ever-pragmatic Twilight can’t manage to swallow this unexplained conventional wisdom.  So she attempts to prove or disprove the phenomenon first by hooking Pinkie to some polygraph device that looks cobbled together out of a colander and some gemstones, and then by stalking (er, observing) her out doing her thing.  The only thing Twilight gets from this is an constantly increasing set of injuries that are foretold by Pinkie’s tics.  This culminates in her being buried under a pile of objects including an anvil and piano dropped by an overhead Pegasus moving crew staffed with the ever popular Derpy Hooves.

Pinkie Pie finally experiences an as-yet-unknown tic of her whole body shaking and she predicts a “real doozy” somewhere in the Froggy Bottom Bog – which was where Fluttershy was heading with her frogs.  Concerned for her safety, Twilight, Applejack, Pinkie and Spike head after her, and while Twilight is gloating that there is nothing to be worried about, a Hydra attacks them.  They flee to a bridge of rock pillars and the others escape while Twilight tries to hold the Hydra off since Rainbow Dash isn’t around to help.  The bridge gets broken and Twilight is saved only by taking a “leap of faith” when Pinkie tells her to jump.  After the Hydra retreats Pinkie is still shaking which means the Hydra was not the “doozy.”  This causes Twilight to first explode and then just accept that Pinkie Sense exists whether she understands it or not.  This causes Pinkie to finally stop shaking because Twilight finally accepting was the doozy that was predicted.

Don’t got too much to say about this one.  No big moral here.  This is mostly a showcase for more of Pinkie Pie’s antics and Twilight Sparkle needing to loosen up a little more.  There are a few good moments, the Hydra itself was quite funny, and any run-in with a cross-eyed Derpy is always a treat.  The moving truck gag is the first time that they intentionally incorporated her with Derp-eyes since the initial animation error and she appears that way at least once in all episodes subsequent to this one.  All in all this is a fair mid-season episode unless one is specifically a Pinkie or Twilight (or both) fan, and then I’m sure that it probably rules.  Decent starter episode?  Since it hinges solely on the idiosyncrasies of two characters, I would say not really.  Repeat viewing?  Depends on your favorite ponies.

Rev. Syung Myung Me: I… don’t like this one.  It’s got its moments, and it’s nice to see Derpy’s first role AS Derpy, but otherwise, this one just falls apart for me, particularly in the third act.  (Oddly enough, this one’s written by Dave Polsky, who also did “Over A Barrel” which also has third-act…..problems.)  There’re some amusing bits — and if the action followed the first couple acts a bit better, it’d have been a stronger episode.  For me, though, the episode more-or-less halts when they go into the Everfree Forest to save Fluttershy from the Hydra.   It’s also odd that Rainbow Dash isn’t in this one, and Twilight even asks herself WWRDD.  (If it weren’t done relatively well, I’d be making Poochie jokes, even if it does almost seem that way.)

Some of the gags are pretty good, and I like Twilight’s pith helmet — but a lot of this episode doesn’t work for me.  Pinkie’s reactions to Twilight are great, but Twilight comes off as, well, kinda bitchy in this episode.  I realize Twilight’s frustrated at her inability to understand Pinkie Sense, but she ends up being gloating and smug and, well, kind of a jerk.  I’m not sure if it helps or hinders that it’s towards Pinkie Pie, the Mane Six member least likely to take it (or anything) personally.  I figure that Rainbow Dash would have called Twilight out pretty early on — surprised that Applejack didn’t.  On one hoof — Twi’s jerkiness just rolls off Pinkie without any trouble… but on the other, Pinkie’s niceness about everything just puts Twilight into a starker contrast.  (I just realized; Pinkie gets waled on in “Over A Barrel”, too, over her song.  What’s the deal?!)

Aaaaaaaand, there’s the trouble with the moral.  Lauren actually ended up apologizing about how the moral and the letter to Celestia was handled.  Even so, it still comes off as a anti-science/pro-faith moral (including Pinkie urging Twi to make a literal “leap of faith”, urgh).  I’m an atheist/skeptic/whatnot, and, well, between Twilight in this ep and folks like Richard Dawkins, we often come off as smug assholes who know everything and if you disagree you are wrong and stupid.  And I don’t think that’s (always) true.  I mean, it’s a big group, you’re gonna find smug assholes — but you’ll find them anywhere.  But as a stereotype, it seems like it’s more often pinned to us than other groups.  And, so you’ve got that, and where Twilight learns that “some things you can’t understand so you have to take them on faith” and it almost sounds as if she’s saying “trying to figure things out is for suckers!” and… I don’t know.  It’d have been easy to make a more accurate moral about how finding things out is good, but sometimes certain things are beyond our ken — while analyzing them and trying to learn is good, we shouldn’t discount something JUST because we can’t explain it right now.  (After all, there’s lots of stuff in actual science that is kind of in the dark.  Well, look at the start of the universe — we’ve got theories on how that came about, but we don’t know for sure… but to disbelieve that the universe started because we don’t know how is pretty silly, as, well, we’re here.)

But that said — even without that, I’d be kinda iffy on this episode.  I was glad to re-watch it, as I hadn’t seen it since the first time I watched, but, well, it’s not exactly up there on my re-watch list.  With some re-writes, I think this could have worked out a lot better — but as it is, it’s probably my least favorite — either that or “Over a Barrel”.  (Though I’ll reserve full judgment on the latter until I re-watch it.)  So, um, yeah.  Not a starter episode.

Bridgeport Cat: I totally agree with Rev about this episode. I’m a UU, so I respect Atheists and such even though I’m not one. I first saw this episode streaming live as it was premiering (back during its Friday airtime) and felt mildly uncomfortable during my first viewing. “Is this really talking about what I think it’s talking about?” I thought, thinking I was over-analyzing it and such. On subsequent viewings I realized that it wasn’t just me, this episode was basically an Atheist being told that they just needed to believe and needed to literally just take a leap of faith.

Again, I’m not an Atheist but I find the whole episode’s premise to be off-putting. This show has done numerous episodes about accepting the beliefs of others and compromising, so why do an episode about Twilight Sparkle needing to have a faith herself? She’s a darling in the skeptic community (as well she should be, it’s hard to find a positive/non-jerkass Atheist portrayal in the media, let alone children’s media), and this just seemed to be a kick in the ass for those who looked up to her. Now,if this episode had been about Twilight respecting the beliefs of everyone who believed in Pinkie’s powers, then so be it. It would have been a much better episode about tolerance and such. Instead, it was about the Strawman Atheist being arrogant, jerkish, and realizing the Power of God/Pinkie Pie.

I’m really glad that Lauren Faust apologized for the message, and went on record that that’s not exactly what she wanted to say. This episode feels like a dark spot in the show’s run, and is definitely my least favorite. Although seeing Derpy getting face time was nice, it’s not worth the episode’s much-maligned message.