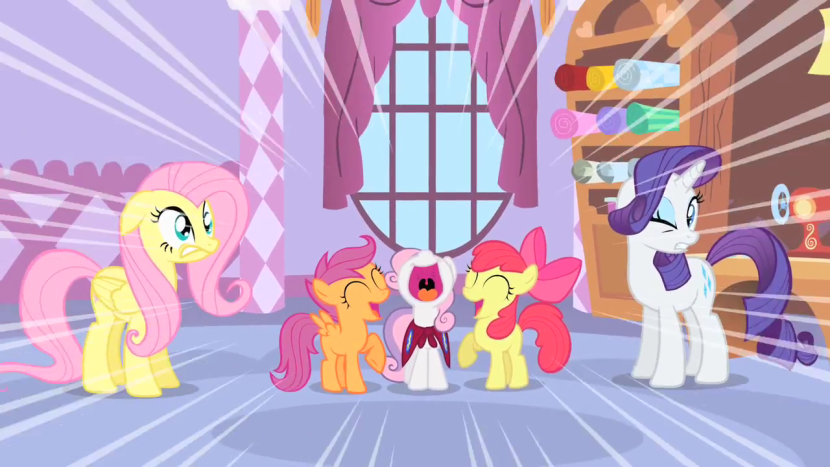 Tyger: Rarity has once again over-committed on an order, but her progress is being hindered by her well-meaning younger sister Sweetie Belle getting under foot and messing up the shop.  While Rarity gets things back in order, Fluttershy comes over to bring back her hard-to-handle cat Opal from being groomed, and the sisters marvel at the ease with which she can deal with the troublesome cat.  At this point, Sweetie Belle’s two other Cutie Mark Crusader friends come over for a sleepover.  However, Rarity has to call it off because the younger sister got into some special silk that she needs for the order she is working on, and so she no longer has time to watch them.  Fluttershy decides that she can handle the kids and offers to host them at her cottage for the night.  On the way back to her place, they run into Twilight Sparkle who is heading over to see Zecora in the Everfree Forest to get some tea.

After getting the youngsters back to her place, they are predictably too rowdy and Fluttershy is unable to control them.  After a variety of shenanigans as they attempt to find their cutie marks, she puts them to bed and extracts a promise of no more crusading for the night.  They get up as soon as she leaves and decide to chase what appears to be an escaped chicken into the Everfree Forest.  Fluttershy gathers up her courage and follows them.  She quickly encounters Twilight Sparkle and discovers that her friend has been turned to stone – apparently a Cockatrice is loose in the forest.  She finds the kids and tries to get them to safety but they don’t listen to her and run off again.  They encounter the Cockatrice and it gives chase.  Fluttershy is able to put herself between it and the kids and even while it is starting to turn her to stone, she is able to stare down and beat the Cockatrice, get Twilight freed from her stony fate, and get everyone back to town safely.

I’ve previously expressed my general dislike of the Cutie Mark Crusader arc, but this one is definitely a step down from the first. “Call of the Cutie” is at least a story of not fitting in and finding kindred spirits.  “Stare Master” is little more than three young cartoon children misbehaving and not listening to adults, resulting in additional problems.  A full two-thirds of the episode goes by before the “Everfree Forest” plot point is even introduced – way too long.  The only saving grace of this episode is Fluttershy being awesome.  Her attempts to meekly control them are charming, and it is always great to see her fierce and righteous indignation when a creature is endangering someone she cares for (see also: “Dragonshy”).  This episode was penned by the same writer who wrote “Boast Busters” which I also found to be overly predictable, grating and un-enjoyable.  He’s two for two in my book.

Rev. Syung Myung Me: I actually kind of like this one.  I don’t mind the Crusaders and I find them way, way less annoying than similar characters in other shows.  That said, sometimes they do need to be smacked upside the head — I thought the thing with Sweetie Belle and the gold silk was a bit much.  Stuff like that, no wonder fandom thinks she’s stupid.  But generally, I don’t mind ‘em.  I like the designs of ‘em, and I think they’re actually pretty good at actually having character (again, seemingly unlike similar kid-versions in other shows).  Sweetie’s probably the least-defined, though.

This isn’t the best Crusaders episode, though — that’s probably either “Call of the Cutie” or “Cutie Mark Chronicles”, but it’s not the worst, either.  (“Show Stoppers”, though I think I even tolerate that one more than most.)  I honestly think the biggest problem with the Crusader arc is the placement in the series; since they were introduced so late, the episodes featuring the CMCs are all bunched up, so it almost feels like they’re being jammed down our collective throat.  Doubly so, with this and “Show Stoppers” back to back.  I bet that if we get the same number of CMC episodes in Season 2, they won’t feel quite so bad, since they’ll be spread out more amongst episodes centered on the Mane 6.

Anyway, I like some of the business with the CMCs — like “Cutie Mark Crusader Carpenters” — but Fluttershy is the star of the episode with her stare.  The reveal where Twilight’s been turned to stone by a cockatrice is actually pretty surprising and maybe even a little scary, even though you know she’s gonna turn out to be OK.  Not many shows kill off their central character, particularly not kids’ shows… and particularly not on-screen.  Even Col. Henry Blake went down over the Sea of Japan, far away from the O.R.

Still – a decent episode; not a starter, really, nor a particular stand-out, but a perfectly decent filler-type episode.  They can’t all be “Suited For Success”…. though that would be AWESOME.

Bridgeport Cat: One thing I really like about MLP:FIM is that they tend to use a lot of mythological monsters as the foes for the ponies. It’s incredibly rare to see a dragon or griffin being menacing/not cute in a show for girls, rarer still to see things like hydras and cockatrices. The degree of menace in this cartoon is really interesting and unique, and sort of shows that you don’t have to simplify and cutify conflict just because the viewing audience is primarily women.

It’s also nice to see Fluttershy being strong in her own way, again. While I sort of find it a bit trite that Fluttershy has to have some sort of special ability to be strong, it’s still nice to show that people with an anxiety disorder aren’t totally useless. As a former babysitter, the contrast between what Fluttershy expects the CMCs to act like and to how they actually act is hilarious, too. However, even though I’m a staunch defender of both the CMCs and Fluttershy, I think this is one of the weakest episodes of the series.  The cockatrice is nice and the stare itself is funny, but all in all it’s a pretty dull episode.