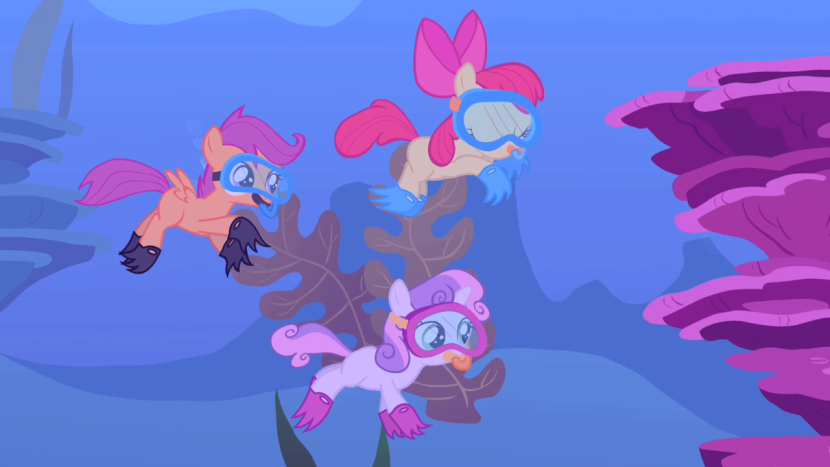 Tyger: Applejack takes her younger sister and her Cutie Mark Crusader pals to her old tree house for the youngsters to use as their new secret base.  The club house is a bit run-down and they are initially less than enthusiastic about the gesture, but when they gather there later on, Apple Bloom has done a bang-up job fixing the place up.  It’s almost as if she has a…talent for such things.  Base of operations complete, they plan and commence an (unsuccessful) variety of activities in the hopes of finding their cutie marks.  While over at the library, Twilight Sparkle suggests that rather than trying new things, perhaps they should explore things they already like.  While there, they learn about the school talent show and decide to plan and execute  a dramatic Bowie-esque rock opera rendition of their new “theme song.”  The talent show performance is ultimately a train wreck, but they accidentally end up winning the award for “best comedy.”  As Twilight talks to them after the show, they miss the obvious lesson learned and decide that they have a future in comedy.

I know that I’ve already kicked the crap out the CMC story arc so I will be brief.  This is probably the worst episode in the series.  It trots out a now-stale joke with an extra twist – each of the younglings has a glaringly obvious talent but they all fail to realize it.  Hoping that they would become self-aware just makes watching this worn-out gag even more frustrating.  The writers miss a chance to spin a story about individualism as well – the CMCs don’t seem to care how they get their marks, just that they get them.  The Rev beat me to it in the “Stare Master” review, but I also think that this is in part a problem of pacing.  This arc was introduced too late in the series, and doing a back to back of these episodes in the middle of what is otherwise very strong story content (Sonic Rainboom, etc) feels forced.  At least spread what is ultimately a side story out a bit more.  This episode and its predecessor are the low point of the whole show as far as I’m concerned..  At least Stare Master had a healthy dose of Fluttershy and some good gags in it.  After coming out of a slew of really strong episodes, these two made me fear that the series had taken a turn for the less than awesome – I was happy this was not the case.

Rev. Syung Myung Me: I was surprised — on rewatching, this episode wasn’t as bad as I remembered.  The first half is actually pretty good — I enjoyed the montage of cutie mark attempts, and I cracked up at Cutie Mark Crusader Psychics, and kinda wondered how many folks caught that reference and realized that’s what they were doing.  And danged if that instrumental isn’t catchy.  Unfortunately, once the plot kicks in, the episode goes downhill.  There are a few good bits in there, too (Scoots doing a Don Music impression, Rarity demanding her supplies back, “dumb fabric!” and, of course “…you’re not using power tools, are you?”), but as we get closer and closer to the show, the good bits tend to peter out.

Also, is it just me, or is it actually pretty friggin’ cruel to give some kids in that situation, doing a goddawful song, a “Best Comedy” award?  It’s like “Wow, not only did your act completely suck ass, but it was so bad that we couldn’t imagine anyone possibly thinking it was legitimately good, so it HAD to have been a put-on!”  I mean, I’ve run into that sorta thing, but, um, typically not something made by eight-year-olds.  At least adults, even if they should know better but don’t, have been around the block a few times so they can probably handle that reaction a bit better.  And, yeah, I know it’s a cliche joke of “Your terrible thing won first prize… as comedy!”, but I think it’s that I tend to hold MLP:FIM at a higher standard and I tend to feel a bit more for the characters than in other shows that’d use this lame, lame plot.

The other thing that seems a bit bad on this episode — it seems that they really tipped the hand of the CMC’s true callings a bit early.  I think part of the fun with the CMC arc should have been discovering along with the kids what their cutie marks would be — now, it’s just down to what it’ll actually look like, rather than what it represents.  If it’d been me, I would have severely re-worked this episode and shoved it much later into the series — maybe even season 2.  Perhaps have an episode around this time in Season 1 with the Cutie Mark Crusader clubhouse along with the hint of Applebloom’s ability to build the clubhouse; foreshadowing the same way that Sweetie’s lullaby in “Stare Master” is a hint of her singing ability.

That said, this isn’t my least favorite.  Of the ones I’ve re-watched so far, that’s “Feeling Pinkie Keen”… but I’m thinking that even on a re-watch, “Over a Barrel” might take that crown.  That beat-up, smelly crown.

Bridgeport Cat: “Over a Barrel” is definitely my least favorite of the first season by far, and I actually feel “Show Stoppers” is underrated in general. Pacing issues aside, it’s a pleasant episode and the 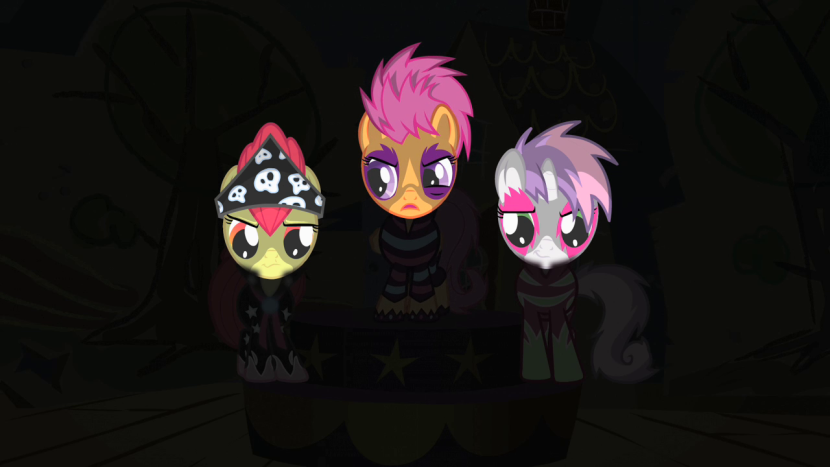 CMC’s musical tribute to “Bohemian Rhapsody” cracked me up the first time I saw it. I adored the costumes, makeup, and the song during the talent show and while this episode has some serious problems, I think it’s not a problematic episode in general. The moral is perfectly fine for a kid’s show (“Don’t rush things, be introspective and you’ll eventually figure out what you want to do with life”) and I suppose if this were any other girl’s show I’d definitely say it was an excellent episode.

Sadly, for MLP:FIM, it’s not the best. The CMC’s frustration at what they want to be is funny, yes, but it goes on for too long and isn’t enough to carry a full episode. I also agree with Matt, that they seem to be figuring out their talents very early. This is a pretty unrealistic unveiling of their talents, but then again this is a show that features unicorns so yeah, I don’t know what I should expect. The foals winning “Best Comedy” is actually pretty cruel, as mentioned above, and I really think it’s an unsatisfying ending to a good-but-not-great episode.

No, it’s absolutely not a starter episode, but it’s far from the worst one in the series. I enjoyed it for what it was, but I don’t see myself watching it over and over in the future.