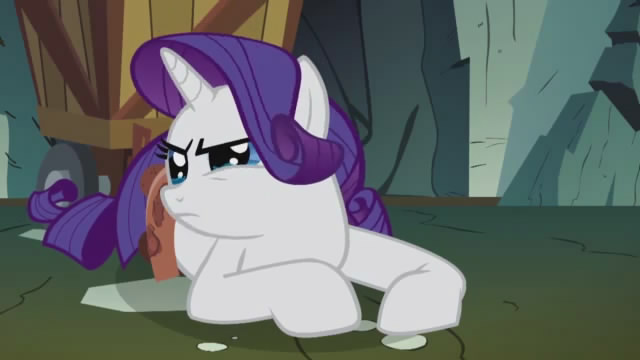 Tyger: While working in her shop, Rarity is visited by the pop star Sapphire Shores who wants one of Rarity’s fashion creations to wear on tour.  Rarity shows Sapphire a gem-encrusted outfit that she had just finished, and the star orders it – plus five more like it for costume changes.  Rarity needs to procure more jewels to fulfil the order and takes the ever-willing Spike out to the field to assist her.  She uses her unicorn magic to locate hidden gem deposits and Spike digs them up for her.  A trio of shady-looking “Diamond Dogs” observe this process with great interest from a hidden spot nearby.  They set a trap to distract her and after a brief scuffle with Spike, successfully kidnap and disappear underground with her.  Spike returns to town to get help from the others.  They pursue to rescue Rarity, and fear she will not cope with the situation very well due her notoriously fastidious and fussy nature.  But while the others deal with infiltrating and navigating the maze-like underground lair, it turns out that our resident girly-girl has the situation and the Diamond Dogs well in hand all on her own…

No matter if you run warmer or colder on her character, this is Rarity’s episode and she absolutely owns it.  There are tons of good bits with her in this one and she delivers the quintessential phrase: I am not whining, I am complaining. Do you want to hear whining? This is whining! In addition to being an awesome glam rock shoutout, the Diamond Dogs as episode characters were really well done.  They are well voiced-acted and the above-ground fight with the other ponies is solid cartoon hi-jinx.  Like the other episodes that don’t take place in and around Ponyville (like the trip to Cloudsdale in “Sonic Rainboom”), the animation quality in this episode is a notch above the usual from this season  I hadn’t seen it in a while and on re-watch one of my first reactions was “wow, I forgot this episode looked so good.”

As far as the moral of this story goes, I have very mixed feelings.  On one hand the general message – “just because you’re lady-like doesn’t mean you’re weak” – is certainly a good one.  One of the central pillars of Faust’s vision is that “there are many ways to be a girl and they are all equally valid.”  This is something that makes the show and its message so strong.  Yes, Rarity was clever, turned the situation to her advantage, and in the end did not need to be rescued.  But she pulled it off by bitching, whining, and throwing tantrums.  Various forms of emotional manipulation ultimately.  So, while I think that the moral is a worthy one, I wish they would have put some more flattering arrows in Rarity’s quiver.  I’m all for spreading the message that “things considered feminine are not inferior” since that notion feeds forms of misogyny and also homophobia.  However turning around and implying “and crying is the most potent weapon in your arsenal” makes me uncomfortable.  Good message, questionable execution.

All in all this is a solid episode, not on my A-list necessarily, but well done and it absolutely pulls the season out of the rut that it had fallen into for the past few episodes.  I don’t think it would make for a very good introductory episode since it relies too much on the personality of one of the ponies to carry the narrative.

Rev. Syung Myung Me: I grinned madly when I first saw this episode and the baddies were introduced — the Diamond Dogs.  I’m a little sad that it didn’t turn into a “Meet The Beat-Alls” with David Bowie references, but it’s a very good episode anyway, so I’m fine with that.  Although, I could just be used to Season 2 at this point, but it did seem the animation was a little rougher in this one, though — not quite as smooth.  Regardless, it’s a good story and generally a good episode.

Rarity is rapidly becoming one of my favorite ponies, horrific behavior in “Sonic Rainboom” aside.  Tabitha St. Germain’s voice acting is top notch all throughout this episode (as it always is), and so, so many great lines and performances, even not counting the famous whining.  Cathy Weseluck’s older Fantasy Spike voice was great too — it sounded natural, though deeper and more masculine.

Aside from the Bowie reference, I also liked that Rarity’s new outfit for Sapphire Shores looked like one of Elvis’ Vegas suits… though with more gems.  It’s kind of odd — her dresses for the Gala were amazing, but it seems that in a lot of her stuff, she seems to go a bit too crazy with the gems for my taste.  Perhaps ponies really like having jewel-encrusted clothes.  It’s a good thing they don’t have TVs in Equestria, otherwise Rarity’d have bought out the entire stock of the Bedazzler.

I also liked that Sapphire Shores’ tour was the “Zigfilly Follies” — that’s an old reference for you.  If the Bowie one is for the parents watching with the kids, that one’s gotta be for the grandparents.  Or the great-grandparents at this point.

Anyway, though — a very strong episode with a great moral — mainly (sort of like moral of the entire show) “girly” doesn’t equal “useless” or “lame”.  Rarity is very much a girly-girl, and yet she owns the Dogs easily.  Just because she’s a princess doesn’t mean she can’t kick ass once in a while… even without ruining her poni-pedi.  Despite being so focused on one of the ponies, I think that this one could be a relatively decent starter.  The Diamond Dogs reference will grab older viewers — and the writing and voice acting should keep them.  There are better starters — ones that involve the other ponies more — but this is a fair one.  A better glimpse at Rarity’s character than “Sonic Rainboom” anyway.

Bridgeport Cat: “A Dog and Pony Show” isn’t one of my favorite episodes plot/story wise, even though it stars my favorite pony. However, it IS one of my favorites moral-wise, since it epitomizes a few of the core tenets of modern feminism. Rarity is considered to be at risk and weak by the other ponies because she’s stereotypically feminine. She loves clothing, gems, visits to the spa, and shopping. Patriarchy insists that feminine behavior is an indication of weakness, as seen in the demonization of men who don’t constantly engage in masculinity as weak cowards. Homophobia, most misogyny, and a variety of other societal social problems stem from the concept that stereotypical feminine behaviors mean you are weak and terrible.

Applejack and Rainbow Dash, the more “masculine” ponies, worry that the “feminine” Rarity won’t be able to fend for herself when she gets kidnapped by the Diamond Dogs. They see her femininity as a weakness that overshadows any of her strengths, and can’t fathom that she’d be able to hold her own against the captors. Spike, who has a huge crush on Rarity, imagines himself as the stereotypical “White Knight” who comes in and saves the beautiful/weak princess. Even the very bright Twilight Sparkle frets that Rarity isn’t strong enough and will crumple in an instant. Practically every single aspect of society that demonizes “feminine” behavior is used as comedy fodder in this episode, and to great effect. All the ponies/Spike have terrible visions of how Rarity will crumple at the slightest sign of male aggression, and as an unabashed feminist I absolutely loved it.

Rarity, of course, ends up being stronger than anyone could have ever imagined. She’s not physically strong, no, but she handled herself so well that her captors are literally waiting on her hand and, uh, hoof. She walks home with the other ponies and laughs at the notion that she wouldn’t be able to take care of the monsters while Twilight reflects on the fact that, yeah, there’s a bunch of ways to be strong.

Out of all the lessons found in MLP:FIM, I think this one is the most important for girls. Even growing up in a feminist-esque household I was taught that dresses, pretty things, and femininity was a sign of weakness and that I needed to wear men’s clothing and reject anything even remotely “girly” to be a “strong women.” It’s taken me a while to un-learn that, but I hope that little girls who see this episode realize that being feminine doesn’t mean being weak and that they don’t have to reject Barbies and dresses to be strong. Anyone can be strong, no matter how masculine or feminine they are, and once we reject the notion that masculinity=strength and femininity=weakness the closer we’ll get to solving a lot of inequality problems. Thanks, ponies!