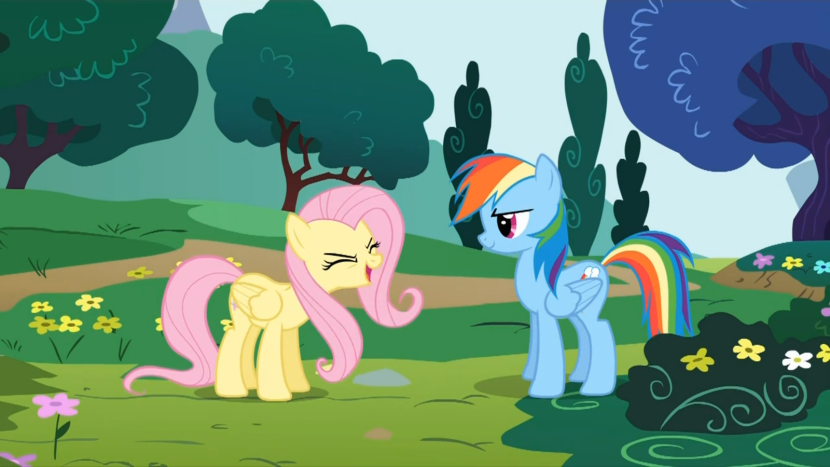 I’m a brony.  And I don’t care who knows it.  But there are a lot of bronies around, and here three of ‘em help you through all the episodes of My Little Pony: Friendship Is Magic.  Not that you should need any help, because it’s a great show and you can just start watching, but hey.  Not everypony is ready to just jump straight into good things.  So here we are to help, episode by episode, pony by pony. If you need help in finding the best Little Pony stuffed toys out there, just check out Top9Rated‘s review. There’s nothing that a brony wouldn’t enjoy in this gem.

Tyger: Rainbow Dash is teaching her Pegasus pal Fluttershy the elements of a good cheer.  Dash is practicing for the Best Young Fliers competition in their hometown Cloudsdale and needs the mild Fluttershy to come as her cheering section.  They both have some trouble with their respective roles and end up over at Twilight Sparkle’s place when Rainbow Dash crashes through the roof.  Again.  The other four are told about the competition and Pinkie Pie reveals by that Rainbow Dash is planning on doing the legendary Sonic Rainboom maneuver as the finale to her routine.  Dash is full of her usual bluster, tells Fluttershy to keep working on her cheering and the Pegasi leave to rest before the competition.  Rarity is the only one to notice that Dash’s bravado is merely masking a bad case of stage fright and tells Twilight to figure out some spell that will allow them all to go to the Pegasus city because “we’ve got to find a way to be there for her.”  Twilight thinks she finds a solution in the library and Rarity volunteers to be the test subject.

The two Pegasi arrive at Cloudsdale and immediately encounter a trio of hard-hatted male Pegasi who begin relentlessly heckling their “old friend” Rainbow Crash.  Fluttershy attempts to stand up for her friend, but the encounter shakes Dash’s already unsteady confidence.  Then they are surprised by the unexpected appearance of their four friends – Rarity sporting a set of translucent wings and the others with a cloud walking spell since the wings were too hard to make for them all.  The support of her friends bolsters Dash’s morale and the two Pegasi show their friends around Cloudsdale.  But while touring the weather factory, Rarity gets increasingly drunk on the attention to her wings and eventually decides to compete against Rainbow Dash in the competition.  Backstage, Dash’s confidence rapidly crumbles and she keeps avoiding going out until the announcer forces both her and Rarity to go out at the same time.  Rainbow Dash is distracted during her routine and eventually, Rarity gets her “mythological comeuppance” when she flies too close to the sun, her wings melt away and she begins to fall.  Rainbow Dash she sees that Rarity and three of her heroes The Wonderbolts are falling to their deaths.  She dives after them, triggers a Sonic Rainboom, rescues them all and in the end is named the Best Young Flier by Princess Celestia – and gets to spend the day with The Wonderbolts.

Rainbow Dash is clearly the best pony, Fluttershy (along with Applejack) is obviously the other best pony, and Sonic Rainboom is the best damn episode of MLP:FIM.  I barely know where to begin.  The animation in this episode is stellar and bolstered by the fact that Cloudsdale introduces an entirely new backdrop for art design.  The tour of the weather factory alone is worth the trip to the Pegasus city, especially when Pinkie Pie decides to sample the rainbows.  While on its face this is an episode about Rainbow Dash, her pal Fluttershy has quite a few moments of her own.  Her tiny “yay” cheer has become iconic – and quips like “were we arguing? I’m sorry,” the misguided pep-talk, and her attempt to tell off the Cloudsdale bullies are some of her best moments in the whole show.  Rainbow Dash’s verbal ups and downs are great as well – from the “MY LIFE IS RUINED” rant, the ever-popular “oh my gosh” cascades and finally “best day ever,” voice actress Ashleigh Ball turns in a great performance.

Characterization-wise, it was interesting to see the soft and squishy side of the normally rowdy Rainbow Dash.  And the speed with which she disregarded her goal to save her friends and her quickness to forgive shows once again that she is the Element of Loyalty (and hence, the best pony).  Which leads me to Rarity.  I do like how the series creators allow the various characters to be less than noble at times, but wow, Rarity was a total bitch in this episode.  Yes she was the one to suggest they find a way to support Rainbow Dash.  She also didn’t hesitate to betray (there, I said it) Dash when her ego got out of control – even after being told to knock it off.  I guess I’ll never understand her fan club, and this episode is one of the reasons I’ll never quite be able to warm up to her.

Overall the writing for this episode is top-notch, which isn’t surprising because the other two episodes penned by this writer – like the previously mentioned Swarm of the Century – are both very strong.  The moral – keep your hooves on the ground and be there for your friends – is pretty straightforward.  Sonic Rainboom has interesting character interplay, killer dialog/voice acting, fantastic animation and an attractive new environment.  This is some of the best the show has to offer.  Good starter episode?  Absolutely – Winter Wrap Up is probably its only peer for starting someone out.  Final verdict: the model of canonically awesome.

Rev. Syung Myung Me: This is indeed awesome.  I love insecure Dash.  I seem to love anything that plays up the various neuroses of the Mane 6. That is probably my own neurosis, loving neuroses in cartoon marshmallow ponies.  This one definitely is canonically awesome.  As canonically awesome as “Suited For Success”?  Well, there’s no song, fake-Sondheim or otherwise.  So, no.  But still really high up there and a great starter.

Rarity is a little problematic in this episode — I think she does get somewhat of a bad rap in here; she’s a bit over-the-top, but not all of it is her fault.  She shouldn’t have over-ridden Rainbow’s record for the routine, but she didn’t know that they were gonna have to go on at the same time.  (Though, seriously, really?  There’s an event that actually wraps up on time?  THOSE DO NOT EXIST.  In real life, there’d probably have been a half-time show, and then fifty last minute entrants and then another half-time show, and more than enough time for Rainbow and Rarity to each go solo.  This is yet another reason I wish to live in Equestria; their stuff ends when they say it will.  Why do you think Celestia didn’t try to save Rarity and the Wonderbolts?  Would have taken up precious time.)  But yeah — this was my introduction to Rarity (I watched my first episodes on my On Demand box — and they were out of order.  It was “Fall Weather Friends”, then “Feeling Pinkie Keen”, “Sonic Rainboom”, and then “Suited For Success”).  So, after “Sonic Rainboom”, I was kind of dreading what looked like it was gonna be a Rarity episode.  (But then it turned out to be awesome, so I was happy.)  So, yeah — that’s the one downside with this as an early episode; it really colors your view of Rarity if you don’t already know the character. 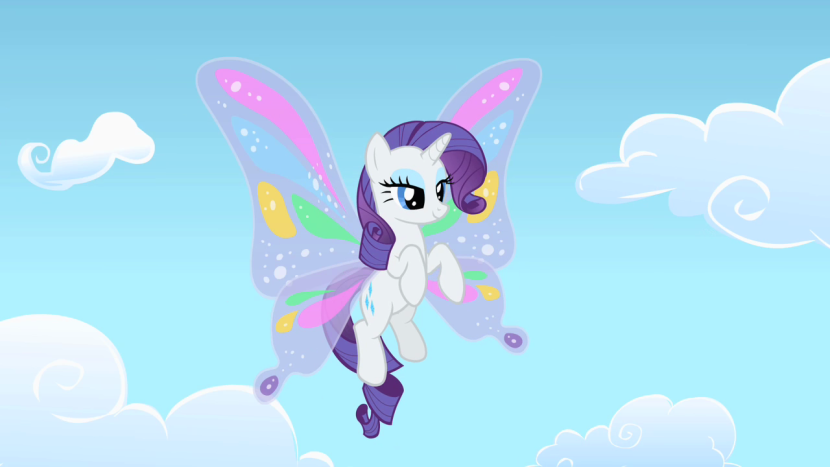 Also:  Apparently Rarity’s wings are based on a real My Little Pony toy from the ‘80s.  Apparently they were really pretty wings… that were also absurdly fragile and broke almost immediately taking the hearts of many a little girl with them.  So, I wager that the Old School MLP fans on the crew were happy to stick it to those plastic film pieces of crap.  TAKE THAT, 25 YEAR OLD TOY ACCESSORY!

Bridgeport Cat: As a huge Fluttershy fan, that beginning sequence with Rainbow Dash trying to teach her about how to properly cheer absolutely makes the episode for me. I like this episode as one that really works to establish the world of Equestria, with the introduction of Cloudsdale and more in-depth explanation about the Pegasus jobs. There’s a lot of lovely world-building that goes on in “Sonic Rainboom,” and even the little touches like how rainbows are inexplicably hot really show the love and care that goes into the show.

Rarity is shown a bit crueler in this episode than in others, but I like to think it’s because she’s the most deeply flawed character of the mane 6. Rainbow Dash is the second most flawed, in my opinion, and so it’s nice to see them play off of each other. I don’t think Rarity ever INTENDED to be cruel to Rainbow Dash, I just think she let her own perfectionism/stage stealing go to her head. She’s not a selfish person (since generosity is her element of harmony and all), she’s just in love with the spotlight. She’s over-dramatic, not cruel.

I love whenever they dress the ponies up, and I loved Rarity’s getup for her performance. The wings were fantastic (and there IS a current Rarity doll out there with those wings, too), and her stage makeup was hilarious. It was also neat to see fan-favorite Rainbow Dash be actually fallible, as she’s sort of shown as a perfect pony for the most part.

All in all, a pretty good episode! Not one of my favorites, but definitely a fun one. It’s always fun to see Rarity hamming it up.