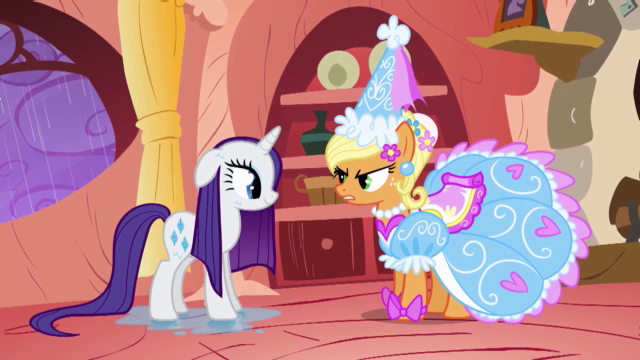 Tyger: This begins with a lot of ponies chipping on on a work detail cleaning up dry branches and similar debris from the trees in town in preparation for an impending storm.  Glamor pony Rarity pokes around using her Unicorn magic to spruce everything up rather than meaningfully contributing to the task at hand.  This irritates the ever practical Applejack who is focused on getting the job done quickly and correctly.  An argument ensues, and they spend so much time grinding their axes they they get caught in storm.  They both end up taking refuge in Twilight Sparkle’s nearby house.  Neither one of them wants to be around the other but between the violent storm, and the newly-socializing Twilight’s desire to have her first slumber party, they try to strike an uneasy truce and stay.  This doesn’t last long and as Twilight leads them through the various slumber-party activities (makeovers, ghost stories, etc), the two bicker with increasing hostility.

As the storm rages late in the night one of the trees outside begins to fall down – which Applejack faults Rarity for because it wouldn’t have happened if she would have done what she was supposed to do.  Applejack stabilizes the tree with her lasso, but because she ignores Rarity’s attention to detail, ends up dragging the toppling tree into the house through the bedroom window.  The two argue but end up admitting their mutual culpability and agree that they need to work together – including Rarity “getting messy” – to fix the issue.  Afterwards, they stop fighting and the detente allows Twilight to declare her first party a success.

This is the most “compact” of all the episodes as there are only three ponies in it, and 95% of it takes place in Twilight’s library.  I watched this again before reviewing it and ended up enjoying quite a bit more than I remembered the first time around.  Even though it is such a well-trodden setup, Rarity and Applejack’s constant and escalating bickering is quite amusing, only made more-so if the viewer specifically likes one of the two.  The truth or dare scene with Applejack ending up in a frilly dress was hilarious, and the bit with her machine-gunning a stack of pillows with her hind legs seems to be in just about every MLP:FIM mashup.

But the most interesting thing about this episode is the animosity between Applejack and Rarity, and how the writers handle it.  Even though they allow friction between the characters at other points in the series, it rises to open hostility in this one.  However the best part is how the writers handle the resolution of their conflict.  A lesser show would offer an off the rack “oh, we have just misunderstood each other, let’s be besties forever now” sort of deal.  Not so here.  Yes, they gain a little more understanding of each other and somewhat more tolerant of their differences.  However, they seem more interested making Twilight happy by not ruining her party rather than forging a new relationship.  The fact remains that they are both very different and that isn’t going to change.  Throughout the rest of the series, they don’t directly interact much, and when they do it tends to be cautiously.  I think for young people the message of “it is OK to not be friends with everyone, but it is also OK to hang out with people who are not like you, and should at least treat them decently” is a much more useful message than “you can be friends with anyone,” because you can’t.

Ultimately this is a pretty solid little episode, especially if you like either of the main actors.  The snippy ponies also come up with some pretty good facial expressions.  Good starter episode?  At the risk being repetitive, I can’t say that is it.  Repeat viewing value?  Since I ended up liking it more the second time I saw it, I guess so!

Rev. Syung Myung Me: After “Applebuck Season”, this is the second really, really good episode.  Bottle episodes are pretty cool anyway as they’re pretty much only driven by character rather than outside conflict, and in a show like this where characterization is key, it works so well.  There aren’t any other bottle episodes, but hopefully we’ll get at least one a season.  (“Bottle episode” is a writing-type-term I picked up that refers to an episode that takes place almost entirely in one location with one set of characters — like the Family Guy episode where Brian and Stewie are locked in a bank vault, or the stuck-in-an-elevator episode of, um, every sitcom ever.)

As I mentioned in my Popshifter article, this is the episode that reminded me that the “Rarity has Obsessive-Compulsive Disorder” trope isn’t just fanon.  The part with the bed seals it.  That’s not the thrust of the episode, thankfully — I love My Little Pony, but I’m not sure if it’s the right venue for a program about mental illness.  (Full disclosure: I’ve been diagnosed with minor OCD, so I can relate with Rarity on this one.  My favorite story: Shortly after the diagnosis, telling my friends — their response to a one?  “Duh.”)  I like that the ponies have their own neuroses; Rarity’s not exactly alone, let’s just say.

Like Tyger points out, this episode gets so many points for having the resolution not be “WE ARE BEST FRIENDS NOW BECAUSE WE TOTALLY UNDERSTAND EACH OTHER!!!” but “Eh, you’re all right, I guess.  We’re just different, but you’re still cool.  Still, I’m probably gonna hang out over here with Rainbow Dash.”  It’s cool that in the circle of friends that are the Mane 6, there’re closer bonds between sets of ponies — Dash and AJ, Fluttershy and Rarity; Pinkie Pie and Twilight are both kind of floater ponies who seem to get along well with everypony equally.  Makes sense for Pinkie Pie — she pretty much loves everypony in general; and Twilight is sort of the Hub Friend who brings the group together, and I think every group of friends tends to have that sort of center.

Anyway — this wouldn’t be a good starter, just because it relies on what we know about the characters to really get a deep enjoyment out of the episode, but it’s one of the most re-watchable, particularly of the first half of the season.  And we’re only three away from one of my favorite episodes ever! Yaaaay!

Bridgeport Cat: Rev. is definitely onto something with regards to this episode being a prime example of Rarity having OCD, but I also think it’s a good example of the emerging fanon of Twilight Sparkle having Asperger’s. She has problems reading that her friends are fighting, and has to follow a book to the letter to have a good time. She’s incredibly, near obsessively organized (which comes up later in the series), and can be very single minded at times. Twilight Sparkle reminds me far more of my buddies with Asperger’s than literally every single portrayal I’ve seen on television (in which they’re shown as idiot-savants who might blow up and eat you at a half-second’s notice).

Yeah, though, Tyger has it right on the nose that this episode portrayed the reality of being friends with people who are different than you better than any other show. Even if you’re both fantastic folks, there’s occasionally going to be friction, and it’s best to deal with it maturely and honestly instead of either shoving it under the rug or letting it escalate to the point it tears apart the friendship you have. In most children’s shows, as Tyger has said, they’ll show both of the characters hugging and going LET’S BE BEST FRIENDS FOREVER, but that never happens in real life. In reality, no matter how great they are, you’re going to roll your eyes at your buddies’ fantasy football league or whatnot, and you’ll learn to live with it instead of enjoying it.

Oh yeah, the episode! It’s a good one, and exemplifies the core strength of MLP:FIM: the realistic characters. For being a bunch of magical ponies living in a candy-colored village, it deals with conflict and conflict resolution far better than any other show designed for young girls. This is, of course, because it doesn’t talk down to the audience and knows how to get its point across with humor and style. Rarity and Applejack both realize that their behavior is hurting their friend’s first attempt at having a sleepover, which is a huge milestone in any girl’s life, and put aside their petty annoyances for the good of Twilight Sparkle. All in all, a very funny (and very GOOD) episode.