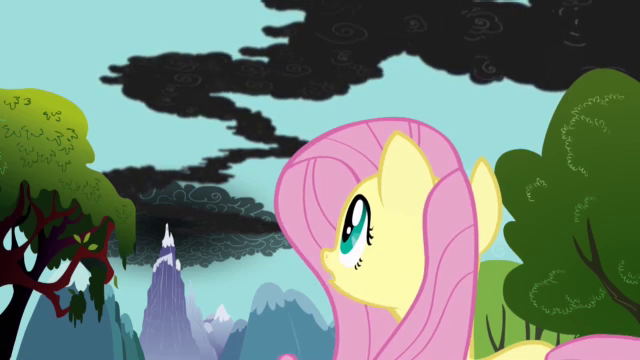 Tyger: This week’s focus pony is the kind yet timid Fluttershy.  As the episode opens, she is off in the forest caring for the animals when she sees smoke in the sky.  She returns to Ponyville to warn the townspeople, only to be initially ignored, and then informed by Twilight Sparkle that the smoke is not a fire, but rather, the byproduct of a snoring dragon sleeping on a nearby mountain.  If the dragon stays there, the smoke will make Ponyville uninhabitable.  So Twilight rounds up the usual suspects to the problem by convincing the dragon to go nap elsewhere.  The mild Fluttershy tries to get out of it but Twilight insists that she come due to her way with animals.  Her timidity makes the trip slow going and difficult for her companions.  When it is time to confront the dragon, she is too scared to assist, but eventually finds the courage when an ill-considered assault by Rainbow Dash causes the dragon to attack the entire group.

I’m not sure why I don’t like this episode a bit more than I do because I really do like Fluttershy.  Perhaps it is difficult to write for her character since she is so mild.  That said this is still a pretty good episode and certainly has its moments.  The 70’s action/exploitation-style film credit montage when they are getting ready to go is great, some of the facial reactions are quite good, and the pony-bowling sight gag when the dragon attacks is superb.  One of the best show quotes, “we’ve tried persuasion, charm… whatever it is that Pinkie Pie does…” is in here as well.  And of course when Fluttershy finally “levels up” and gives the dragon a verbal dressing down, it’s pretty funny.

Despite the fact that the two Pegasi are ultimately friends, in this episode Rainbow Dash doesn’t attempt to hide her frustration with Fluttershy’s behavior, her affect on the situation, and even goes as far as trying to get Twilight to boot the timid pony from the group.  Allowing the characters to have realistic friction and/or personality conflicts is one of the strengths of the show and sets it apart from others of its kind.

Overall, this is a “pretty good” filler/pad episode.  There are certainly worse in the series and a couple of the moments make it a bit better than the more tepid (a.k.a. “fine”) episodes like “The Ticket Master“, et al.  Starter episode?  Personally, I would say no.  Repeat viewing material?  Depends how much you love Fluttershy.

Rev. Syung Myung Me: It’s really odd — a LOT of people say this is the ideal starter episode, but I don’t think it is.  I agree that it’s a bit more fillery, but I don’t think I even really like it as much as Tyger.  Oddly, Fluttershy’s my favorite pony, so you’d think I’d be all over this one.

To me, though, Fluttershy seems a little bit out of character.  She’s timid and mild, but in this episode, she seems… too much so.  I also don’t really buy that she’d be afraid of dragons; not only has she stared down manticores and cockatrices — you’d think she’d have been at least a little leery of Spike initially.  After all, even people who are afraid of spiders or snakes tend to not even like the little, cute ones.  But in the pilot, she just glommed onto Spike as if he were just another animal for her to take care of and learn about and love.

That, too — I don’t really see Fluttershy being, well, that big a pain in the ass.  Her timidity seems more of the sort to be, if anything, the kind to give into peer pressure rather than to hold up the rest of the group.  She’s afraid of things, yeah, but I think the thing she’s most afraid of is ponies not liking her and being mean to her.   It’s other ponies that are her biggest fear, not falling or dragons or avalanches.  But here, anything and everything seems to set her off — and she doens’t seem to mind or care that Applejack and Rainbow Dash in particular are beginning to resent her.  I’d think Fluttershy’d be HYPER-sensitive to that.  Not to mention that Fluttershy prides herself on her ability to help — here, until the end, she’s nothing but a hindrance — and I can’t see Fluttershy letting herself do that.

This one does have its moments — the Charlie’s Angels thing is pretty cool, and Fluttershy is absolutely adorable in her football helmet and padding.  And, of course, the end where she DOES tell off the dragon is funny as well, but on the whole, this one just seems… kinda lame to me.  It makes me wonder if the writer, Meghan McCarthy, doesn’t really care for Fluttershy as a character, as the Fluttershy in “Dragonshy” seems like the Fluttershy someone who sees shyness as a weakness would look at the character.  (Then again, she also wrote the very strong Fluttershy episode, “Green Isn’t Your Color”, so maybe not.)

Bridgeport Cat: I’m going to go against the grain and state that “Dragonshy” is one of my favorite episodes. However, realize I’m coming from it as someone who identified with Fluttershy the entire episode and who reads way too much into every MLP:FIM episode. Boy, HOWDY, do I read too much into “Dragonshy,” so bear with me.

Fluttershy very obviously has an anxiety disorder. It’s severity seems to hinge on how funny it would be for that particular episode, but in general she’s characterized as being painfully anxious. I, too, have an anxiety disorder that to some people seems randomly fluctuating. Some days I can go out in public and be fine, while if I have to meet someone new I become lightheaded and clammy-palmed. So I can identify with Fluttershy GREATLY in this episode, as she is ignored and as she is scoffed at by a few of her frustrated friends.

While they do their best to accommodate her anxiety, it does become too much for them, which I think is a realistic touch that anyone who has a seriously mentally ill friend can attest to. It’s not easy having a buddy who needs accommodation, and it CAN get frustrating. In the end, of course, it’s all worthwhile as Fluttershy shows that she can be just as strong as the rest of her friends, just in her own Fluttershy way.

Rev, while it seems unrealistic that she wouldn’t be sadder about her friends being upset with her, she could also have such low self-esteem that hearing negative things about herself doesn’t phase her. She could also be so anxious that she doesn’t realize how upset her friends are, or her own realization at how upset her friends are could be what’s making her as anxious as she is. She DOES come off as stereotypically timid, I agree, but I think that they have to show her as shy as she is to make her strength at the end truly shine through.

Fluttershy says something as she stands up to the dragon that hit me right in the chest: She can put up with people upsetting HER fine, but when someone attacks her friends she will not stand for it. And I definitely see myself in this, as I can take heaps of nonsense but will flip my shit if someone even lays one verbal finger on my buddies or anyone else. This is something that is true with other mentally ill buddies of mine, too, but is something you rarely see in children’s or adult media. When someone is seen as mentally ill, they’re shown as needing to be coddled and protected with no real advantage or strength seen inside of them.

But here, in a show with magical ponies fighting dragons, we see a shining example of truth about what it’s really like to be mentally ill. It ISN’T easy, for both Fluttershy and her friends, because of her condition. In the end, though, it’s worth it because she is such a strong friend who has real honest-to-god strength. She’s stronger than Applejack AND Rainbow Dash, and shows up everyone else by using firm, but fair, words and overcoming her own fear. Yes, she’s a burden at times, but she’s still an incredible person/pony who’s worth having.

Of course, I could be just reading too much into this as I often do when it comes to children’s entertainment, but as someone whose had to deal with severe anxiety stuff my whole life it’s a breath of fresh air to finally see someone like myself portrayed on TV, especially TV for impressionable kids. All in all, I love this episode and put it as one of my favorites. Once again, MLP:FIM shows that true strength comes in many forms, even from shy little Fluttershy.