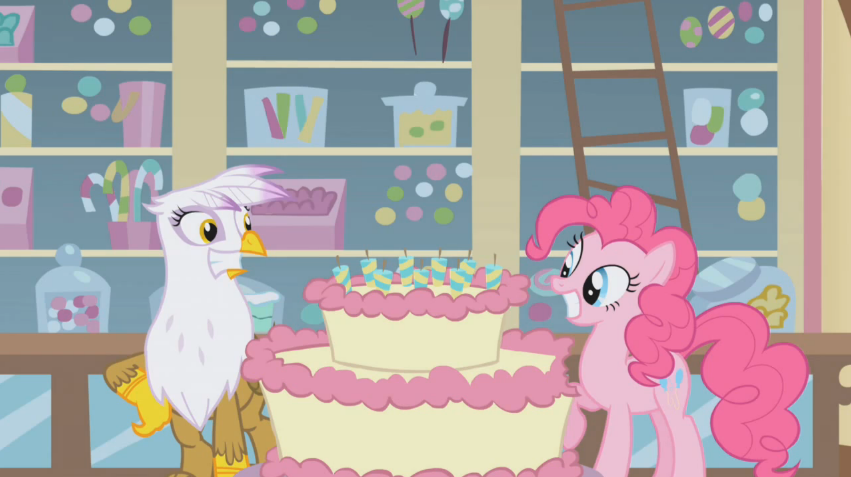 Tyger: This is another focus episode, but rather than showcasing a single pony, it focuses on a pair.  The very different Rainbow Dash and Pinkie Pie get the spotlight in this one.  As the episode begins Pinkie is relentlessly chasing Rainbow Dash who is doing her best to get away because she finds Pinkie’s personality irritating.  After losing the chase, Dash discovers that Pinkie wanted to use her ability to tweak the clouds to play a practical joke.  And so, the two end up bonding over a mutual love of practical jokery.  Enter Rainbow Dash’s old flying school friend Gilda the (duplicitous) Griffon.  Gilda is a model of decorum when Dash is around, but when she is not, Gilda is a bully, a snob and a thief.  First she chases Pinkie off, then ends up bullying anyone in Ponytown that crosses her path while Pinkie watches from the sidelines.  In the third act, Pinkie throws a party to welcome GIlda.  Practical jokes dog Gilda causing her to explode, show her true colors, and offer Rainbow Dash an ultimatum: your new friends or me.

Now, keeping in mind that this show in primarily a morality play for young females, I think that there is a lot to like about this episode.  Both of the “messages” in the show are good ones.  The more minor message of “it is ok to hang out with people that aren’t like you/perhaps look past these initial differences in people and you can find something in common” is a good one and certainly makes the world a nicer place to be.  But on the more major side, peer pressure coming from one or another group of friends to alienate the other, especially when one of the groups is somehow perceived as “not cool” is a very real and difficult issue.  And for a target audience (sorry Bronies!) that might be in the process of transitioning schools, or meeting new friends in extracurricular activities, I think that this message is relevant, nuanced and useful.  It addresses a real-world issue.  Additionally, from a characterization perspective, it is also a nice reminder that the cast’s high-spirited and rowdy tomboy is also the Element of Loyalty – which is one of MANY things that makes Rainbow Dash the best pony.

That said and putting my Brony cap back on, gotta say that I have to give this episode another one of my patented “it’s fine.”  Rainbow Dash hiding in the clouds was funny and her Pegasus sky house is cool.  The couple of minutes of practical jokes was pretty amusing.  And I will say that it was this episode that really turned my attitude towards Pinkie Pie around.  I was initially skeptical of her character (I watched the show in broadcast order) and this episode was the one that showed she is a jokester and an eccentric, not just “the bubbly and loud one.”  However, I needed to watch the episode again because I really couldn’t remember anything significant other than that, and the fact that I’m convinced that Pinkie placidly bouncing after the furiously fleeing Rainbow Dash has to be a reference to Pepe Le Pew the date-raping skunk from Looney Tunes.  Who I hated.  I’ll never be able to see Pinkie Pie sitting at the table with her milkshake in this one without thinking of the Watchponies mash-up.

Ultimately, this episode doesn’t stand out in any significant way either positively or negatively.  Not a starter episode and little or no replay value.

Rev. Syung Myung Me: I had to re-watch this one for the review; I’m rewatching ALL of them, but I HAD to for this one, as I’d only seen it once — and it’s a lot better than I remembered.  Gilda herself is a little annoying as an antagonist, but that’s more with her use of slang.  Unfortunately, slang is very hard to pull off, particularly in a kids’ show.  Gilda’s character would probably be using stronger words than “doofus”, but you don’t really want to be the place a little kid hears “fuckface” for the very first time.  Not to mention that slang evolves a bit faster than the rest of the language, meaning that it can really date a show.  (I’m not sure about the Batman Beyond solution, where to make it a bit more futurey, the characters use the slang word “Schwey” for everything; it’s a relatively elegant solution, but for whatever reason “schwey” just grates on my ears somethin’ fierce.)

One of the other morals Tyger didn’t mention that I think is only hinted at is, well, give your friends some space.  The entire first act can be summed up as “Pinkie Pie has boundary issues”.  She’s chasing down Rainbow Dash even though the latter definitely doesn’t want to be found — and later, she can’t really take that Dash wants to hang out with Gilda at that moment.  It actually looks like that’s kinda how it’s going to shake out — and in a way, that might have been a better episode, but instead it turns out that Gilda’s the aggressor.  That said — it’s well-handled; particularly the end reveal that Pinkie’s party wasn’t for pranking Gilda, but to cheer her up and make her realize Ponyville’s not such a lame place to be.

As an aside — I typically hate pranks and am usually often on the “rrr” side of the Prankster Episode, but I thought this was VERY well done.  All of the pranks were harmless (and shown to be harmless, in the case of the painted apples), and both Pinkie and Dash could find the humor when they were pranked themselves.  It’s that that sets them apart from Gilda, who is only happy when it’s others that are the butt of the joke.  This was a nice, subtle thing, and made me enjoy this episode a bit more.

I love the Pepe Le Pew shout-out, too — even though I never really liked the original, as Tyger puts it, date-raping skunk (though I don’t know if Pepe ever actually went on a DATE so much with the unfortunate cat — so maybe he’s just the normal kind), and I love the bit where Pinkie pulls out a marshmallow when Gilda breathes fire.  AND the Rainbow Dash melty-face.  Being a Pinkie episode, there’s a lot of great, cartoony business in this episode, which definitely helps the re-watch value.  Still, not a great one, but a relatively solid episode — particularly if you tend to think of it as a bit of a filler one.  Not a classic, but perfectly serviceable.

Bridgeport Cat: I, too, find practical jokes to be fairly obnoxious, but I’m a fairly sensitive broad who doesn’t liked to be pranked. And one thing that Tyger and Rev didn’t mention is that when Rainbow Dash is about to pull a prank on Fluttershy, even a relatively harmless one involving a fake duck, Pinkie Pie immediately stops her and tells her that Fluttershy is far too sensitive and would be legitimately hurt by the joke. Rainbow Dash stops, thinks about it, and agrees, calling the prank off.

This is such a little touch of morality in a moral-heavy episode, but it’s also a touch of real humanity to the ponies. The ponies realize that while Fluttershy is their friend, she’s also different and not able to handle some things her other friends can. The moral isn’t that Fluttershy should “Toughen Up” and grow a thicker skin, but that her friends should be respectful of her differences and personality. This is a message you don’t often see, and I was touched to see it.

Tyger’s right about this show having a definite moral of ‘Having different sorts of friends is OK,” which is a moral I think is important (and one that I thought was fairly well explored in “Call of the Cutie”, an episode oft-cited as one of the worst of the season [I disagree, but I’ll talk about that when we get there]). This show also shows that Pinkie Pie is ALWAYS right, no matter what. They could rename the show MLP: Pinkie Pie is Magic because my GOD that girl is never, ever wrong.

Of course, another nice touch is that after talking to Twilight about her run-in with the boisterous griffon, she does take her advice to heart and examine whether or not Gilda really is a “meanie”. Once she’s confirmed this, she feels no shame in trying to prove to Gilda that she should be nicer by throwing her a party. Pinkie could have gotten revenge on Gilda by throwing stacks of pranks at her, as Gilda assumes, but she decides that kindness and hospitality might be the best tool for persuasion. Alas, Gilda is just a jerk at heart and can’t get over herself, and when she shows her true colors as a funny-and-popular-but-giant-dick lady, Rainbow Dash realizes she’d rather have her dorky-but-nice friends instead.

There’s a lot of morals to take from this episode, each of them absolutely perfect. As an aside, can I just say that I LOVED Gilda’s character design? She looked absolutely awesome, and is a blast to draw. I do hope she comes back at some point, to either redeem herself or act as a further foil in the harmony of Ponyville.