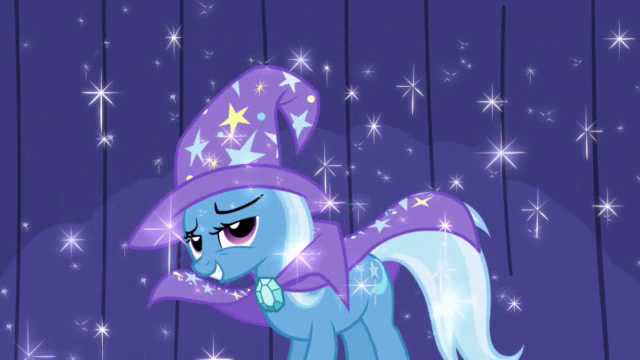 Tyger: This one is a somewhat rare episode focusing on Twilight Sparkle.  As the “point of view” character, the showcase episodes tend to revolve around the other ponies with her acting as the Greek Chorus.  The episode beings with the duo Snips and Snails announcing to the townsfolk that a new Unicorn pony, The Great and Powerful Trixie, has come to Ponyville to perform magic.  Trixie thinks quite a bit of herself and is not shy about letting everyone know so.  Her boastful personal challenges end up embarrassing several of the Mane 6, leaving Twilight Sparkle reticent to use her own magic because she fears looking like a show-off as well.  To prove her claims to have single-handedly vanquished an “Ursa Major” uber-bear-demon sort of thing, Snips and Snails find one, wake it up and bring it back to town to rampage around so Trixie could do her stuff.  She of course has lied about her abilities, can do nothing to fix the problem, and Twilight Sparkle ends up saving the day.

Put plainly, this episode has no business being in a show that is so generally innovative and smartly done.

Snips and Snails are generic “idiot duo side characters” and Trixie is the same “loud-mouthed self-aggrandizing jerk” cut-out that have been used in cartoons since the Earth was still cooling.  I didn’t like those tropes when I was a kid and my opinion has not mellowed since.  It doesn’t come off as clever homage, it just feels lazy.  As soon as Trixie starts shooting her mouth off, issuing the “best in Ponyville” challenge, thereby causing Twilight to become self-conscious about her own talents, you know exactly how everything is going to play out.  But unlike “Applebuck Season,” which was even LESS subtle about telegraphing “what was going to happen and what the moral of the story is,” this one isn’t particularly fun to watch.  Twenty-two minutes of irritating stock characters acting all stock and…irritating!  The only saving graces were a popular visual trick done by Rainbow Dash, and the quality of the animation on the rampaging Ursa.  Those were cool.  The “don’t be a braggart but it is OK to be proud of your talents as the same time” moral is nice enough as well.

Starter episode/replay value?  No to both.  This one gets a rare “don’t bother at all” from this reviewer.  Judging from the solar mass of Trixie-centric fan-works, my opinion appears to be in the minority.  But I just can’t follow The Herd on this one.  I’m going to be interested in what Rev. Me has to say to offset my sourness on this one.

Rev. Syung Myung Me: After “Griffon The Brush-Off”, I was thinking I’d like this one better on re-viewing.  Honestly, not so much.  And, truthfully, it’s less Trixie as the problem as Snips and Snails.  Oh MAN are they irritating.  There’s a bit where Snails kinda slips into a Bob & Doug McKenzie voice, which actually would have probably made this episode a bit better if Snips and Snails were ALL Bob & Doug.  I don’t think it’d have saved the episode, but, hey, who doesn’t like Bob & Doug?

I think it’s kind of telling that the Trixie fanfic and other works I’ve read tend to show what this episode could have been.  (Particularly since none of them had Snips and Snails in them.)  Though most of the fanfic I’ve read takes place after the episode, it’s much more interesting — after all, Trixie runs off and her cart and all her things are destroyed.  I mean, dang, she shouldn’t have been so boastful, but does becoming homeless and losing everything you own really a just punishment?  She was just kind of a jerk — Snips and Snails actually brought the danger to town, and they got moustaches?  That’s a bit lopsided.

And I think what is kind of brushed under is that Trixie actually WAS talented — she may have lied about the Ursa, but the tricks she’d done in her show were pretty cool — as was the little light show illustrating the Ursa story.  I’d also read another brony online mention, too, that they probably wouldn’t have had too much of a problem with Trixie acting against the Mane 6…. if the Mane 6 didn’t start heckling her first.  Trixie’s a showmare after all — and that’s the first thing any good performer does is figure out how she’s going to deal with hecklers.  And she did, and quite well.  Trixie’s abrasive, but she didn’t go out picking fights or anything.

Good things about this episode — well, the animation is top notch as always.  I even thought the Ursa Major, despite having fangs and generally lumpy, was pretty adorable.  And the Ursa Minor was beautifully done.  But, well, the script just wasn’t there on this one.  Chris Savino (who also did this season’s “Stare Master”) usually is pretty good, but I guess we all have off-days.

Bridgeport Cat: Trixie is a great foil, to be sure, and I really hope the show decides to do more with her. While her personality isn’t as realistic as the Mane 6, I can honestly see the occasional guest 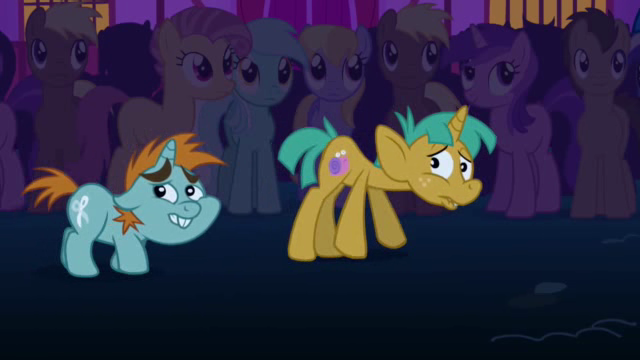 appearance working well. The ponies occasionally need an obnoxious jerk to butt heads with, and I like her far better than the vindictive and cruel Gilda. There’s just so much more you can do with this character type, and I hope the creative team takes advantage of this.

Snips and Snails, however, just don’t fit in to the show. Their design (which isn’t bad, mind) is entirely different from the other ponies. Their eyes are pure black pupils, and their eyebrows are far thicker (with Snips having HUGE thick ones a quarter of the size of his eyes). They look nothing like the other foals, and certainly nothing like the adult male ponies. Again, I do like the design, but it makes them stick out like a sore thumb in the Equestrian universe.

I don’t really have anything bad to say about this episode, but I don’t have much good to say about it other than the inclusion of Trixie and more explanation about the nature of unicorn magic. Tyger and Rev have basically said it all, and while I don’t dislike it as much as they do it’s certainly not the best episode, and was the final one I saw for a long while back when I watched the first batch of episodes in November. It was mediocre enough that I didn’t go back to the show until January, and I’m glad I did.