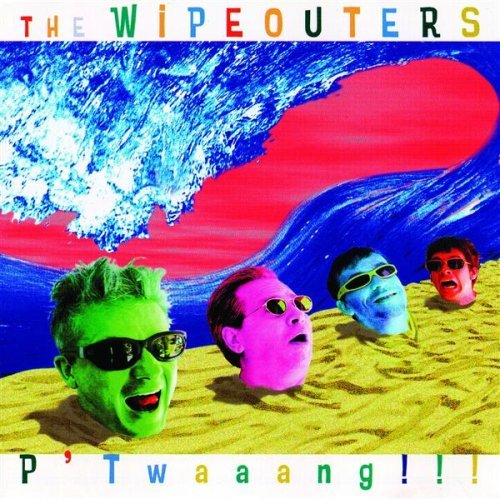 With the recent release of DEVO’s new album, Something for Everybody, it’s important not to lose sight of that two decade gap when new DEVO material was rarer than diamond encrusted, gold plated diamonds. In 2001, however, there was a slight glint of light in the darkness, a mysterious album by a band called The Wipeouters, headed up by Mark Mothersbaugh, and featuring some of the DEVO alumni. Was this the comeback we were waiting for? Was this DEVO under an assumed name, ready to assault our brains with more de-evolved weirdness? A preliminary tracer shot, in preparation for the main salvo, a new loud shot from the big spud gun?

In long, The Wipeouters is pretty much what it says on the tin, and what that tin says is that it’s a reunion of the Mothersbaugh brothers’ first band, a 60’s surf-rock band. Add to this a back story about how The Wipeouters actually invented surf rock in their parents basement, in the suburbs of Akron, miles from any coast that people could actually surf on, and how drummer Josh Mancell was with the band from the beginning, despite not even being born when the band formed. Whatever. It’s silly, but provides a good context for the disc—90% basic surf-rock, though not without a bit of spillover from DEVO here and there. Take the squeaky synthesizers and megaphone vocals in “Twist ‘n’ Launch”—I don’t think there’s any surf band that wrote lyrics like “well I’ll be brainwashed / if that don’t float your boat / this spud’s no beauty queen”. Of course, in proper surf rock style, the majority of the tracks are solidly instrumental, and the songs with lyrics fit that pretty standard 60’s surf-rock milieu. Don’t come here expecting poignancy.

Instead, come here for some bad-ass guitar playing. P’Twaaang!’s greatest strength is in showing off the talents of one Bob “Bob 1” Mothersbaugh. If there’s been an under-appreciated guitar player in rock music, it’s Bob—not just under-appreciated by the music world, but by his own band, too. One could write a book on how DEVO’s post 1981 output basically ignored Bob’s skills, but let’s focus on the positives here. Except, perhaps, for the synth-driven “Ravin’ Surf” (which goes on for about five minutes longer than it should…), all of the songs on P’Twaaang! provide a basic backbeat for Bob to lay down some pure, clean, unadulterated surf guitar. You hear every damn note the man plays, clear as day. There hasn’t been an album that showcased Bob this well since Q: Are We Not Men? A: We Are Devo! Oh, but I do go on. There’s also some pretty damn epic synth and organ playing by Mark Mothersbaugh, too. While it can descend into a bit of masturbation, such as on the aforementioned “Ravin’ Surf,” Mark’s playing gives (most of) these tracks the perfect sheen of vintage sounding surf organ, and the occasional foray into modern sounds.

And, it does get pretty modern from time to time. “Ravin’ Surf” goes into almost IDM territory, there’s an Indian influence on “Wounded Surfer,” complete with sitar, DEVO-style synth wiggling abounds in the background of a number of the songs. In fact, the most DEVO sounding this thing gets is on the epic “Luna Goona Park,” which features Jerry Casale on vocals, and also has a nice little synthesized bass line. It feels a bit like a lost B-side from DEVO’s Smooth Noodle Maps era, which always got a worse rap than it deserved. Anyhoo… And then there’s the album closer “Shut Up, Little Man” which these bizarre sampled clips of a guy yelling at another guy, over a simple, but effective, surf-rock instrumental bed. It works, and is one of the high points of the record.

So, should you track this little bugger down? That depends. Do you like surf music? Do you like DEVO? Do you like DEVO enough to put up with 3/5ths of the band (depending on the track) performing surf music? If you answered “yes” to any two of those questions, you should check this out. Recently, this disc was put back in print by Cleopatra Records with new, and totally bizarre cover art, so it’s not that hard to find. Worth a try.