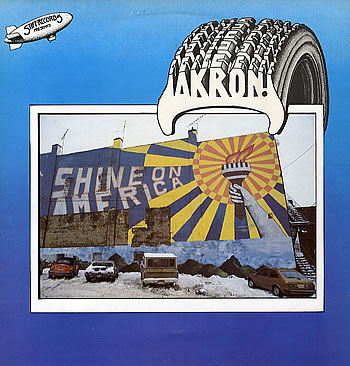 If there was any period in music I wish I had been around for, I would have to pick the period from 1975 to 1985. Though, I technically was around for the last two years of that grouping, I was far too young to actually know a damn thing about the world around me, especially in terms of music. So, why ‘75 to ‘85? Well, those were the prime years for the development of a couple interesting genres: punk, New Wave, and Synthpop. In places like New York, London, and Los Angeles, new bands were popping up, doing new things. New York had Talking Heads and Suicide, London had The Clash and The Sex Pistols, LA had more punk rock bands than you could shake a stick at. Then again, if I had to live in LA, I’d start an angst-ridden, angry punk rock band too.

There was also another little epicenter of this kind of music: Ohio. Somehow, among the rust-belt ruins of post-industrial Cleveland and Akron, some of the most interesting and inventive bands of modern musical history formed and crawled out from the primordial ooze into the greater world. By far, the two most famous of these bands were DEVO and Pere Ubu, and they set the eyes of the musical trendsetters on the midwest. DEVO at least, got out of dodge as soon as they could, settling their spudly behinds in Los Angeles in 1977, but there were no shortage of bands who stuck behind to stake their flag in the rust, and proudly proclaim Akron (or Cleveland, for that matter), as home. Enter: The Akron Compilation, 13 (well, technically 14) tracks of pure Ohio music, packaged in a scratch’n’sniff sleeve (smelling of tires) and sadly out of print.

Released in June of 1978, a month before the first album by Akron’s finest deserters DEVO, The Akron Compilation attempts to document the wave of creativity that swelled in the Rubber City. There’s no doubt, however, that DEVO’s visibility is what brought attention to the Akron bands documented on this disc—and no small coincidence that it was a Stiff Records release, the label that brought DEVO’s first three singles out to the world outside of Ohio. Hell, the cover art even echos the iconic shot of the “Shine On America” mural in Akron that had been immortalized in DEVO’s 1975 film “The Truth About De-Evolution”.

Anyone picking this disc in the hopes of hearing more DEVO-style music might end up a bit disappointed. Not that there aren’t bands on here that at least took something from the local, well, not-quite-heroes, but The Akron Compilation does not deliver on that. Instead, sandwiched between recordings off local radio (including a bit of Eagles’s “Hotel California”) runs the gamut from the simple folk-rock-light psychedelia of Jane Aire & The Belvederes, to the wonky, Beefheart-like weirdness of Tin Huey, the country-fried rock of Rachel Sweet, the straightforward punk of [The] Bizarros, proto-New Wave by The Waitresses (of “I Know What Boys Like” fame, and Akron’s second-most famous export), and the distorted buzz-saw guitar protopunk of Rubber City Rebels—and all of that just on side one. Side two has additional contributions by The Waitresses, Jane Aire, and Rachel Sweet, alongside a Pere Ubu-esque track by Sniper, the piano-led ballad “Mephistopheles’ Passion”, some country-fried blues by Terraplane, and the dark, latin infused weirdness of Chi-Pig (who are this disc’s closest relatives to DEVO, though they sound nothing like them.) [1] Oh, and there’s one last Waitresses track, their early single “Clones,” as a hidden bonus track.

If this darn thing has a weakness, it’s that about two thirds of the songs are kind of dull and uninteresting. Sure, The Akron Compliation has historical value, a document of a unique place and time in rock music history, but one has to think there’s a reason why Rachel Sweet’s utterly generic country-rock never got very far, or why Rubber City Rebels sort of languish in near-obscurity when bands with that sound were a dime a dozen. I’ll just isolate the high points: Tin Huey’s “Chinese Circus” is a squawking riot of noise that will get stuck in your head. The Waitresses’s “Comb” is gender-bending fun, danceable, and really should have been a hit. (Instead, we’re stuck with them being known for that goddamn “Christmas Wrapping” song…) Chi-Pig’s “Apu-Api (Help Me)” sounds like The B-52’s crossed with Pere Ubu, dark and exciting, and hell, I’m just a sucker for country-fried blues, so Terraplane gets a nod. Everything else is fairly forgettable.

Still, if you want to know what else was going in Ohio when the big name groups were busting out of the Buckeye State, or want to know the roots of stuff like The Black Keys, you could do far worse—and it’s not the only document of Ohio’s music scene to be pressed. Expect a review here, in due time, of “Bowling Balls from Hell”, another disc of Ohio bands, including an appearance by an ex-DEVO member. Stay tuned.

[1] Chi-Pig consisted of Susan Schmidt and Deborah Smith, who were given co-writing credits on the DEVO track “Gates of Steel,” which, according to We Are Devo! by Jade Dellinger and David Giffels, came from a mutual jam session, and a Chi-Pig song called “Pimple on my Plans.” At least it made sure they got some royalty money along the line.