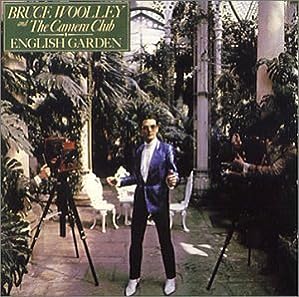 Is it really a trivia question when everyone and their grandmother knows the answer? If the question is “What was the first video played on MTV?” I would have to say the answer is no.[1]  Babies fresh from the womb could tell you that it was “Video Killed the Radio Star” by The Buggles. The real trivia question is this: “Who recorded ‘Video Killed the Radio Star’ first?” That’s right; it’s a cover tune, originally recorded by Bruce Woolley & The Camera Club for their album English Garden. The would-be Buggles, Trevor Horn and Geoff Downes, wrote the song for Bruce’s band, and while they had some success, Horn and Downes decided to make it their first single. The rest is history and music trivia. There wasn’t bad blood, though. Bruce Woolley was close with The Buggles, though never an official member. He even appears in The Buggles video for “Video Killed the Radio Star”, a friendly shout-out to the guy who tried to make a hit of it first, and joined them for a couple of The Buggles occasional one-off performances. The success of the cover version left The Camera Club’s lone album, English Garden to the dustbin of musical history. Thankfully, history has preserved video of the band performing on the Old Grey Whistle Test[2], and on BBC Midlands.

Well, almost. The album has more going for it than the MTV connection. Keyboards on the record were played by a young lad credited as “Tom Dolby”, who would later go by a more formal first name and have a couple huge synthpop hits. The album even features some of Dolby’s first songwriting with the instrumental “W.W.9”. Other band members went on to bigger and better things. Bassist Matthew Seligman played with a number of people, including The Soft Boys, Robyn Hitchcock, and even with former bandmate Thomas Dolby. Woolley, aside from occasional involvement with The Buggles in the early 80s, had a solo career as well, and is a music producer of renown, much like Mr. Horn.

English Garden is a strange record, straddling a line between glam rock, and new wave, with a slight dose of progressive rock sensibilities in their arrangements. At times, Bruce’s voice tries to emulate the range of Sparks’s Russel Mael, especially on the title track. It lacks the Sparks sense of humor, though, and it lacks the inventiveness of Trevor Horn’s production and arrangements that makes The Age of Plastic hold up. Consider the two versions of “Video Killed the Radio Star”. Camera Club’s version is a straight ahead rock song with a constant tempo. It lacks the emotion of Horn’s rendition. However, I’ll freely admit that Woolley is a far better vocalist. The other Buggles song on English Garden, “Clean/Clean” fares similarly in comparison with its counterpart. There’s just a lot more to sink your teeth on in the Buggles version. Perhaps it’s me. I came to this album after developing a familiarity with the Buggles Age of Plastic, and it might be clouding my judgment upon hearing these earlier interpretations of the songs.

Also, the Buggles tunes are only two songs out of a set of thirteen, so how to the rest of them fare? It’s hit-or-miss. Camera Club is pretty solid B-grade glam rock/new wave music. Most of the songs are forgettable, though the keyboard playing is pretty darn good from a technical standpoint–the actual selections of sounds often verges a bit into the cheesy territory, but it might be a product of the times. The high points are the title track, “No Surrender”, “You’ve Got Class”, the too-short Dolby piece “W.W.9”, and the two-part “Goodbye to Yesterday”. Sadly, there’s not much else that really grabs the listener. If the album could maintain the energy of its title track, there might have been a spark to really grab people. As it is, the album is just chock full of dull snoozers like “Dancing with the Sporting Boys”, “Flying Man” and “Get Away William”.

So should you track this down? That depends. It’s certainly not a bad album, but really it’s more of a curiosity. If you’re one of those obsessive Thomas Dolby fans, or an obsessive Buggles fan, or just have to complete your collection of slightly obscure new wave records from England, then you could do far worse. It is in print on CD, retitled as an eponymous album with new cover art, and with some remixing and alternate takes.[3] Among the changes, the CD version of “Video Killed the Radio Star” omits the vocoded intro. It does, however, add on five bonus tracks. Certainly give the videos a look and decide for yourself if it’s the sort of thing you want in your collection. At least you’ll have the ability to be an insufferable nerd the next time MTV’s first video comes up: “Oh, you didn’t know that ‘Video Killed the Radio Star’ was actually a cover song, originally by Bruce Wooley & The Camera Club…”