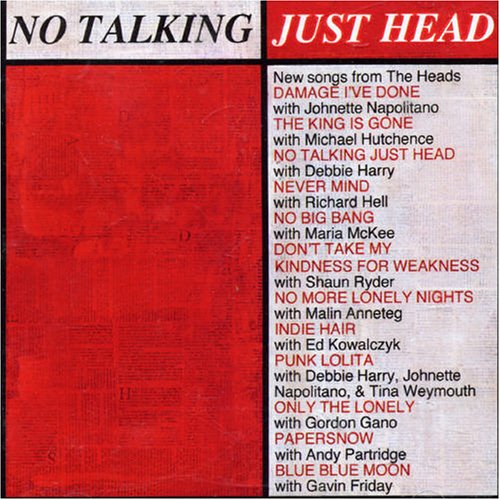 Enough has been said about Talking Heads and their influence on modern music. More platitudes would simply be a waste of your time and mine. Still, as genre-breaking, and genre-defining their music was, the breakup of Talking Heads was about as conventional as any other. I think the official cause would be listed on the autopsy as “musical differences”. One listen to the component members post-Talking Heads output lays it on the table. David Byrne’s got his thing, Tina Weymouth and Chris Franz have theirs as Tom Tom Club, and Jerry Harrison? Well, he’s a record producer these days. [1]

In the immediate wake of Talking Heads breakup, Byrne and Tom Tom Club both put out albums: Uh-Oh, and Dark Sneak Love Action respectively. Byrne got all the accolades. Tom Tom Club got… not much. I suspect this is what led to the reunion of Franz, Weymouth and Harrison along with former collaborator Abdou M’Boup, Lenny Pickett, and some guy named Blast Murray to put an album out on their own. Wisely, the rechristened Heads decided not to try and find someone among them to fill in for David Byrne. Instead, they opted to call in favors/blackmail with a whole host of new wave and post-punk contemporaries ranging from Johnette Napolitano (Concrete Blonde), Debbie Harry (Blondie), Richard Hell, Andy Partridge (XTC), and uh… Malin Anneteg? Gavin Friday? I suppose when you tell people about a project like this, you’ll take what you can get.

These folks weren’t just surrogate vocalists, either. They chipped in some songwriting duties as well, presumably because none of the original members felt up to the challenge of writing something in the Talking Heads vein. Still, with the classic Talking Heads rhythm section and their top-notch skill set, it can’t be that bad, right?

There’s a terrible misstep right out of the gate with the song “Damage I’ve Done”. It’s a noisy, aggressive, overlong piece of junk that only gives Napolitano an excuse to scream the brilliant chorus of “How do I undo the damage I have done?” My first suggestion would be to erase the tape. I suppose the choice of such an aggressive, dark, and noisy opener (and lead single!) was to separate The Heads from Talking Heads. If so, then mission accomplished, because nobody would confuse this with anything having remotely to do with Talking Heads. It doesn’t get much worse than this, though the title track comes dangerously close with it’s pseudo-industrial production and cheap moaning by Debbie Harry, who you think would have better sense.

Part of what made Talking Heads unique and lasting was not just the music, but the subject matter. None of the songwriting on No Talking, Just Head even approaches Byrne’s sensitivity, often opting for surprisingly explicit sexuality instead. I can’t imagine Talking Heads at their worst writing lyrics like “Grease it up good / Work it back and forth / You don’t even know who I am / Think of the good things.” The Shaun Ryder (Happy Mondays) led “Don’t Take My Kindness for Weakness” does one better with a chorus consisting primarily of: “Rock me, baby! / Tell me, baby! / Sleazy lady!” Like the opening track, I’m convinced this was a deliberate attempt by The Heads to establish themselves with a different musical identity from their predecessor, but it seems like a waste of effort.

The album’s sole saving grace is “Punk Lolita” featuring upbeat vocals by Debbie Harry, Johnette Napolitano and Tina Weymouth. It feels like a Tom Tom Club song, a fact that likely didn’t escape Weymouth as it was resurrected by Tom Tom Club for their live album Live @ The Clubhouse. Standing on it’s own, it’s proof that while the non-Byrne members of Talking Heads can make decent pop music on their own, but when slapped in the middle of the rest of this mess, it’s only proof that even a blind dog finds a bone now and then.

Some of the tracks aren’t quite as painful as the rest. “Papersnow”, sung by Andy Partridge sounds not unlike an outtake from XTC’s Oranges and Lemons. This wouldn’t be so bad, except that this is supposed to be the successor to Talking Heads. Richard Hell’s “Never Mind” sounds almost like a Talking Heads song, but mostly because they ripped out the drum beat, wholesale, from the classic Talking Heads cover of “Take Me to the River”–but Hell’s singing lacks any of the emotion that he pumped into his voice in the Voidoids days. He sounds anesthetized. Musically, “Indie Hair” is at least inoffensive, but the decision to bring Edward Kowalczyk of Live to sing is mind boggling. His style is completely out of place with both the song and the band. The other collaborations are simply too dull and pointless to even discuss.

David Byrne did put an end to this farce by slamming the band with a lawsuit, claiming they were “too evocative of Talking Heads,” [2] which seems more polite than saying “You’re making your own legacy look bad.” The Heads did have a short tour that was seemingly well-received by Talking Heads fans, with Napolitano handling vocal duties for most songs, and the old Talking Heads material, [3] but it was cut short by Byrne’s lawsuit. While it’s not come up in interviews, I’m certain the vast majority of the “bad blood” between Byrne and The Heads comes from his smack down of their vanity project, and less about the musical difference that split the band up in the first place.

Like many of the other albums I’ll be talking about in this series, what pushes No Talking, Just Head over the cliff into awful, instead of just bad is that the very name of the band and the album title invites you–even dares you–to compare it with Talking Heads. The choice of No Talking, Just Head for the title makes an explicit reference that the voice of the band, David Byrne is not only not there, but that he is not even necessary. It is an assumption that is not borne out by the final product, and had the band managed to proceed, they would be tarnishing the legacy of one of the most influential bands of the last 40 years. Had they simply decided to call themselves something else, and sever ties with a musical legacy that they couldn’t match, well, we’d be having a similar conversation with a different tone. There’s no disguising a crappy album, no matter how many guest vocalists you throw at it.

Coming up in Part Two: Wall of Voodoo