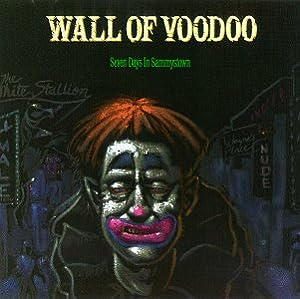 Cover of Seven Days in Sammystown

In the world of rock frontmen, Wall of Voodoo’s Stan Ridgway is one-of-a-kind. He sings in a voice like a nervous gangster in a 1930s Mob movie, and the songs he writes are film noir pictures of sad-sack characters in a tough world that doesn’t give a shit. If all you know of Wall of Voodoo is “Mexican Radio”, you’d do well to catch up with their first two albums, Dark Continent and Call of the West, just so you have a frame of reference for what comes next. Suffice it to say, the band that got its start as ACME Soundtracks, with two guys, a Fairfisa organ, a guitar and a rhythm box [1] would go on to make music so idiosyncratic that nobody’s even approximated it since. This even includes the band themselves, once Ridgway packed up and walked out.

The year was 1983, and Wall of Voodoo was riding high on the success of Call of the West and the big single, “Mexican Radio,” written by guitarist Marc Moreland. They were touring, they’d had big gigs, they’d opened for the ill-fated 3-DEVO concert in ’82, and now they were at Steve Wozniak’s US Festival. Thanks to a circulating bootleg, one can relive the final Ridgway-era Wall of Voodoo show, and it’s a doozy. They’re tight and they’re sharp, and there’s no clue that Stan would call it quits. According to interviews, the critical moment happened backstage, as Stan watched Joe Nanini dump a bowl of potato salad on a scantily clad girl backstage. The girl freaked out, and Nanini got arrested and flown out by helicopter. Realizing the rock and roll life was too much, and the drugs and touring had made his life “a walking nervous breakdown,” Ridgway split. Nanini went into drug treatment, and took his assortment of unusual percussion instruments with him. Backing keyboardist, Bill Noland, also split town.

Reduced to a duo of keyboardist Chas T. Gray, and guitarist Marc Moreland, they decided to keep on as Wall of Voodoo. They found a new vocalist in former morgue attendant Andy Prieboy, and a new drummer, Ned Leukhart, brought on a conventional drum kit. They also brought back Marc’s younger brother Bruce on bass–for some reason he was kicked out after the band’s first album. Naturally, there was no way a band like this would sound anything like what they used to sound like, and bless them, they embraced it rather than try to repeat history. The new lineup of Wall of Vooodoo put out two studio albums, Seven Days in Sammystown and Happy Planet, as well as a live album The Ugly Americans before calling it quits in 1988.

Of the two studio albums, Sammystown is the best, and establishes the new Wall of Voodoo sound out of the gate. The electronics are played down, becoming more a textural element behind a more prominent Marc Moreland guitar, and the first single, “Far Side of Crazy,” hits the balance perfectly. A few of the other tracks don’t quite have the same level of cohesion, though. “Mona” and “Blackboard Sky” turn into dull dirges, while the cover of “Dark as a Dungeon” and the original “Museums” just feel out of place. When it’s good, though, it’s as good as any of Ridgway’s dark portraits on Call of the West. “Far Side of Crazy” tells the story of a fame-crazed assassin inspired by Mark David Chapman, while “Room with a View” is every person’s experience with an off kilter roommate. The most underrated song on the album is “(Don’t Spill My) Courage” where a crippled man chews out a Christian TV interviewer for insinuating God’s involvement in saving his life. It’s shows the thematic split that would become more pronounced on Happy Planet. A Ridgway version of the same premise would have the poor man barely hanging on to his life, kept numb by drink. [2]

Happy Planet does not fare as well. It starts with an incongruous cover of “Do It Again” by The Beach Boys, which received a surreal music video treatment starring Brian Wilson at the height of his involvement with Dr. Landy. It then stumbles through three dull songs before falling into my favorite Prieboy-era song: “Back in the Laundromat”. “Laundromat” tells the story of a perverted guy falling for an overweight woman in a laundromat, who happens to accidentally be showing a bit too much skin. It’s hilarious with well-delivered lyrics by Prieboy, and really deserves a music video. The album’s other high point is “Elvis Bought Dora a Cadillac,” which does exactly what it says on the tin, telling the story of Mexican waitress trying to deal with the effects of being given a Cadillac as a tip by the King himself. The chorus is a brilliant piece of writing: “The gods I loved / They were poor white trash / One was making wine in Canaan / The other tipping waitresses Cadillacs”. If the rest of the album lived up to these, we’d have something, but ultimately it’s just a big load of forgettable.

When a band ends their career with a live album, it’s easy to view it as simply a cheap way to fulfill a record contract. It’s actually hard to make that case with The Ugly Americans, but one could. In addition to a mix of tracks from both Stan Ridgway and Andy Prieboy’s albums, there’s two new songs, including a cover of Woody Guthrie’s “Pretty Boy Floyd”, [3] and a live recording of a B-side that add a lot of life and show some effort was put into the package. The Ridgway tracks are competently performed, but they just seem to be missing something, especially the performance of “Ring of Fire”. [4]

While the Andy Prieboy-era Wall of Voodoo albums are not as good as the Stan Ridgway ones, they are pretty good. They stand up on their own… well, Seven Days in Sammystown stands up on its own, and that’s something. In a way, I wish they’d had more success, and kept going. Prieboy’s Wall of Voodoo had spun off their own style from Stan Ridgway’s Wall of Voodoo, and they’d only just tapped into the potential they had. Now, both Marc Moreland and original percussionist Joe Nanini have passed, and there will be no more Wall of Vooodoo in any form, Stan Ridgway’s bizarre 2006 “reunion” show aside. “Mexican Radio” may be the song everyone remembers, and Ridgway the voice, but there’s much more to Wall of Voodoo than that.

Coming up in Part Three: The Doors