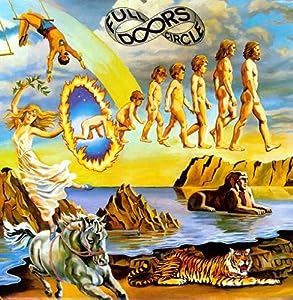 Jim Morrison is as iconic as a rock and roll frontman can get. His face stares out of album covers, and posters taped up in college dorm rooms ripe with the stench of bad pot. His good looks, rich baritone, poetic sensibility, propensity to show off his genitals on stage–and early death–helped make him an icon, a larger-than-life figure that even surpassed the band he was in–I think they were called The Doors. They put out six records of blues-influenced psychedelic rock, all without a bassist. Then, one night in Paris, Jim Morrison keeled over and died, possibly of a drug overdose. One might think this would be the end of The Doors, but if it was we wouldn’t have this article, would we?

Morrison died on July 3rd, 1971, and Other Voices, the first of two albums recorded without him was released on October 25th, that same year. The band started work on the album while Jim was still alive, well, and living in Paris, but they still bothered to finish it and got it out the door while Morrison’s body was still fairly warm. I could be charitable and say that the remaining members didn’t want to let good, expensive studio time go to waste, but that certainly doesn’t explain why they released a second album, Full Circle, the next year.

Vocal duties on both albums were taken over by Ray Manzarek and Robby Krieger, neither of whom sing anywhere close to as well as Jim Morrison. Naturally, the songwriting was taken over as well. The idea I may have implied at the start of this article of Jim Morrison as the sole creative force in the band is not accurate. As early as The Soft Parade, the individual band members, save for drummer John Densmore, were writing songs on their own. On previous albums, at least in terms of songwriting credits, they were all collaborative efforts. Of course, it’s Morrison’s songs that are generally the most favored of this period. [1]

Other Voices is competently performed, though the music lacks the bite that made L. A. Woman–and the rest of Morrison’s albums–so legendary. Listening to the album, more than once I felt as if I was just listening to bland adult-contemporary pop from the early 70s. It sounds Doors-like, or perhaps like Doors Light–it’s certainly less fulfilling. Being free from Morrison’s shadow allows the band to indulge themselves, and good lord do they indulge. Each song on Other Voices is an exercise in genre variation–at least as much as the band’s instruments allow–such as the Caribbean influenced “Ships with Sails” which attempts to do the “Light My Fire” extended instrumental break thing and fails. Meanwhile The bar-piano blues number “Variety is the Spice of Life” is a silly ode to marital infidelity that feels like a throw-off by Dr. Hook. “In the Eye of the Sun” goes into an overlong fingerpicked electric guitar solo by Krieger that just goes nowhere. Meanwhile, “I’m Horny, I’m Stoned” is the sort of thing that even Jim Morrison would throw aside, and “Down on the Farm” apparently is a song that Morrison did throw aside during the L. A. Woman sessions.

The followup album, 1972’s Full Circle, sees the band exploring the world of Jazz and Gospel. One should get shades of Spinal Tap Mk. II and the “Jazz Oddysey” here, but thankfully they don’t attempt to make any epic pieces on this one. The high point is a straighforward cover of Roy Brown’s classic blues number “Good Rocking Tonight” that plays to the band’s strengths. Most of the rest is forgettable, though by far, the worst track on Full Circle is “The Mosquito.” This little number consists of little more than vaguely Mexican style noodling and repeated lyrics of: “No me moleste mosquito / Why don’t you go home / No me moleste mosquito / Let me eat my burrito” delivered in a bad Spanish accent. Even Jim Morrison’s most drug-addled poetry never was as atrocious as this–to say nothing of the casual racism that permeates the track. It was even released as a single, and was actually somewhat successful, hitting number 85 on the Billboard Pop Singles charts. There’s no accounting for taste. [2]

After Full Circle, something clicked and The Doors went their separate ways, with solo work and involvement with new bands. Manzarak even took to production, and notably produced the first album by Los Angeles punk rockers, X. [3] In 1978, though, the trio reunited to make one last recording under The Doors moniker: An American Prayer. I only bring it up to say that I’m not including it here because it’s not really a case of The Band Without the Face, as they were recording a musical backing to recordings of Morrison’s poetry from 1969 and 1970.

Even today, however, Ray Manzarek and Robbie Krieger continue to exploit the corpse of The Doors through their group Manzarek-Krieger [4]. At least they’ve taken to leaving the pair of Morrison-free records to the dustbin of the band’s history. They’ve never seen official CD release, even on the “Complete Studio Recordings” box set. The only acknowledgement has been the inclusion of “Tightrope Ride” from Full Circle and Full Circle’s “The Mosquito”–curiously retitled as “No Me Moleste Mosquito”–on some compilations, despite claims that the band conveniently lost the master tapes.

Once again, we see a band essentially denigrating the very thing that made them famous. Morrison’s poetry, voice, and artistic sensibility are what turned The Doors from a bluesy rock band into one of the iconic musical forces of the 1960s. Jim Morrison leaves a shadow on every moody, artistic rock frontman, and if Manzarek, Krieger and Densmore got lost in that shadow, it’s for good reason. They’re great musicians to be sure, but not exactly good songwriters, and certainly not good writers of the sort of lyrical and musical combination that made the albums with Morrison so powerful. These two discs are best relegated to the cut-out bin and forgotten.