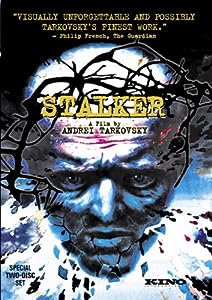 Cover of Stalker: A Film by Andrei Tarkovsky

When people ask me what I thought of a certain movie, I am often forced to describe it in the most general terms: “It was kind of OK”, “I’d go and see it again, I think”, “That was like having my ears punched with railroad spikes”, and so on. It’s tricky to sum up a story told over two hours into a yes or no recommendation. But some individual movies scenes are so pleasing that they are worth praising – sometimes despite the context of the movie around them. I beg your indulgence while I describe six scenes from recent and not-so-recent movies that I think are worth waking up for (in the event, let us say, that you sleep through the rest of the film).

Captain Lennox’s team take refuge in a small Arab village, intending to defend themselves against the scorpion-shaped Decepticon that has been chasing them across the desert. At first, the scene starts to look like any modern fight sequence: full of confusing ultra-quick cuts. I recognise that it is useful sometimes to emphasise the chaos of battle (and perhaps disguise the inadequacies of CGI), but long sequences of this type are getting more common than not, and they are often just too hard to make sense of (for example, how could a fist-fight between an Alien and a Predator not be fun to watch? Exactly. Yet somehow the director of AVP managed to use the fast cut technique to make it both confusing and dull).

Fortunately, the film cuts between close-up confusion and overhead tracking shots of the battle, allowing both a respite from the noise of the battle and a chance for the audience to get a tactical overview of the deadly robot creeping closer and closer to the soldiers.

2 – The Simpsons Movie: The ultimate dare

When Homer dares Bart to skateboard to the local KrustyBurgers and back in the nude, it is so obvious what will happen that no-one in the audience is remotely surprised as the scene begins with Bart flying across town, his dignity preserved by a series of increasingly improbably props. It’s very clever, but it has been done so many times that only the youngest members of the audience are likely to find it new – indeed, it’s been done before at least once in the Simpsons TV series (Marge and Homer’s naked escape from their tryst in the crazy golf course uses the same technique, albeit a bit less dynamically).

The clever turnabout in the scene, of course, comes at a perfect moment. The timing is nice, and the audience’s attention is focused at exactly the right place, since they’ve been looking at the obscuring props for the last minute – so when Bart skates behind the hedge, obscuring everything of him except his genitals, everyone gets the surprise at exactly the same moment. In my experience, it’s rare for everyone in a cinema to laugh at a sight gag – perhaps because they usually take a little while to process – but it seemed like it happened for this scene.

3 – Stalker: Outside The Room

This Russian film is based on “Roadside Picnic”, the novella that the Strugatsky brothers wrote (probably my favourite science-fiction story). It’s not particularly easy to understand if you haven’t already read the story (and perhaps even if you have). Psychologically intense rather than scary, and too early to benefit from the sort of special effects that might have made it possible to show the Zone in its full mystery, it is largely up to the individual viewer to decide whether the film is fascinating or boring (I’ve seen it twice, and felt both ways about it).

What makes it this way are the time-consuming panning and still camera scenes showing the beauty of the wildlife and the ruins of the Zone. Some of them are just too long, but they do give a sense of the long trek towards the protagonist’s goal – a room containing an artifact that will grant wishes. Finally the Stalker leads them to the ruined building, but neither the Scientist nor the Writer can bring themselves to enter the room. The camera stays still for minutes while the light changes around them, and rain suddenly falls and stops. The feeling that they are actually struggling with their decisions is quite palpable, and the changing colours are beautiful.

(As a little aside, I think it a bit of a tragedy that a similar effect was ruined in Red Dwarf. Unlike many people I know, I found the first series brilliant, but the following series not nearly as good. One noticeable difference is the loss of the long tracking shots of Red Dwarf itself, accompanied by the ship’s mournful theme. In series one, these shots were used to fill in between scenes, giving a sense both of the passage of time and the loneliness of the lost ship. Later series, cutting directly from scene to scene, seemed rushed and trivial in comparison.)

4 – Pirates of the Caribbean 2: Fun on the big wheel

Although one of the charms of action movies is their black and white morality, I am always pleased by a nod towards the idea that there are more motivations in the world than “Do Evil” and “Do Good”. The fluidity of this fight-and-flight scene near the end of the movie is a good example, with allegiances changing every few seconds as the various heroes and villains battle for control of the film’s macguffin.

Although much less complicated and shorter, the three-way fight between Bond, the villains, and the Russian silo guards in “The World Is Not Enough”, feels similarly exciting.

I was primarily interested in District 13 because of the free-running sequences, but was pleasantly surprised to find it to be quite intelligently scripted – the characters are believable and independent, and there are quite a few scenes which appear standard at the beginning yet finish in an unexpected manner. One excellent example occurs at the beginning, when Leito’s sister Lola is kidnapped. It appears that the movie is setting up for the standard revenge/rescue story.

Lola, though, is not quite so helpless – obviously, growing up in a crime-riddled area does not produce many innocent wallflowers. As the scene goes on it seems more and more plausible that she’ll just escape by herself – making the actual rescue more abrupt and surprising. Rather than making the kidnap the focus of the whole film, it’s all over in a few minutes. By the time Taha’s henchmen return to their lair Leito has already broken in and is waiting, holding the big boss hostage.

My own father died in late 2000 – and I feel as though in some way I’m over my grief, but in other ways I’ll never get over it. I didn’t often feel weepy at movies, for instance. Edward Bloom’s final story, told by his son, is a beautiful summary of his eventful life, as Will carries him down to the water that was the focal point of one of his own most important tales. There he sees all the characters from his life and can say his goodbyes. A glimpse of how less awful death could be if only people could finish their real lives the way they finish their stories.