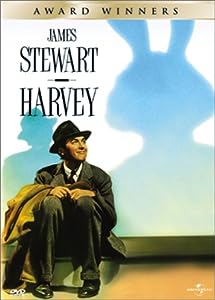 Harvey is one of those films like My Neighbor Totoro

that is so completely good-natured it’s impossible to hate. In fact, I would find it hard to see someone who didn’t find it utterly charming. It’s a beautiful picture and the film makes you alternately want to hug everyone and have a pooka of your own as your best friend.

Jimmy Stewart — one of my all time favorite actors anyway — is PERFECT as the wonderfully pleasant Elwood P. Dowd, the slightly-off alcoholic whose friends with the titular 6′ 3.5″ rabbit. Mr. Dowd never lets anything get to him — he has learned to embrace every waking moment as an enjoyable experience, regardless of what’s happening around him. He’s a friend to everyone, even those who would rather not be his in return.

Dowd realizes his friendship with the invisible-to-most Harvey does make him look foolish in the eyes of others but simply doesn’t care — or rather, he cares in as far as much as that he can take advantage of that to make others happy. He’s sad to note that many of the people to whom he introduces Harvey never return — but wisely notes that it’s most likely envy that keeps them away. After all — Harvey’s a great friend and confidant; who WOULDN’T want him as a constant companion?

In a way, Harvey is about magic and the good sort of lies — sometimes we can simultaneously know something isn’t true but yet believe and know that it is, and, sometimes the fact that it’s a delusion doesn’t matter. And sometimes being tied too closely to the smaller truth blinds us to the miracles of everyday life — and I’m not even necessarily talking about magical stuff here. Have you ever thought about the beautiful ways that animals react to their environment and adapt to technological changes? For example, crows in Japan use cars as tools to open nuts by dropping the nuts in front of cars — in the crosswalk — to open the shells. Then they fly down, wait for the light to change so the crosswalk is safe to walk in, hop out to the opened nuts and get the meat. That is amazing.

The small truth might be that Harvey is a hallucination (though I wouldn’t bet on that) — but the Big Truth is that Harvey and his kin are all around doing little things. Harvey’s in the various coincidences that happen to keep you from possible doom, and the beauty of the city. Most of all, however, Harvey is in the spirit of kindness and fun. Harvey doesn’t exist — but he does at the same time.