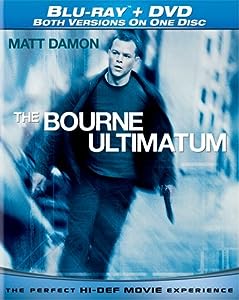 The latest Bourne sequel, The Bourne Ultimatum, has a very final-sounding title. First off, no worries – they set it up for another sequel. They’re not sending this cash cow out to pasture! I’m not sure what they can name the next one though. Supremacy, then Ultimatum…Requisition? Prophecy? Hostage Crisis? Fugitive? Free Agent?

The great thing about the Bourne films, other than the hotness of Matt Damon for the ladies (and some of the guys), is that it’s not a brainless butt-kicking spy film. There’s a plot line, which flows from film to film. In other words, don’t go see this if you haven’t seen the previous films. (Don’t read this review any further either!) Once again, Jason Bourne is trying to figure out who he is while trying not to get killed. He is also trying to get revenge on those who had his girlfriend killed in the second film (the lovely Franka Potente, who I wish had lived to see another sequel). While he’s doing this, the government is trying to track him down so they can kill him. In other words, he really has his plate full.

The film keeps up a good pace, and the cat and mouse style of the story keeps you engaged during quieter moments. Paul Greengrass directed this film and the previous one, and he employs a technique that people seem to either love or hate – I call it the vomit-cam. The frenetic motion of the camera is supposed to make you feel like you’re a part of the action, which in a way it does…but it also makes you miss details of the action or wish you had a Dramamine. I feel a little cheated when the camera starts to wobble, because I like to see the ass-kicking actually happen, not just imagine it. It’s really a minor quibble that’s easily overlooked when you see Bourne do his MacGyver tricks with fans and books and various brick-a-brack that he finds along the way. He’s like MacGyver meets the Terminator: clever and indestructible. Bullets and knives cause merely flesh wounds. Psychologically, Bourne has a struggle reconciling the man he has become and the man he once was, which is what elevates the film over the latest Bruckheimer blow-fest.

I give this 4 out of 5 Kitty Sneezes. Haa-chew!