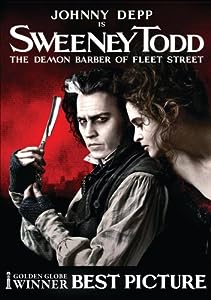 My curiosity was recently sated when I attended a screening of Sweeney Todd: The Demon Barber Of Fleet Street with my dad, who was not at all prepared for what awaited.

From the first thundering organ chords during the Dreamworks logo to the final melancholic notes of the closing credits, I was thoroughly engrossed. Having never seen the original stage version, I am quite ill-equipped to draw a comparison and thus I will make no attempt. Instead, I will review the movie as a movie and how it made me feel.

To begin: most people know by now that I actually don’t like musicals much. Sounds strange coming from me, since music is such a big part of my life. But there’s always been something about musicals that has simply rubbed me the wrong way. There are exceptions, of course, especially if the musical is particularly exceptional. A Funny Thing Happened On The Way To The Forum. Little Shop Of Horrors. Phantom Of The Opera.

Well, we can now add Sweeney Todd to this very short list.

Stephen Sondheim, sick mother that he is, has crafted a very nicely told tale of revenge and rage, and there’s something about Benjamin Barker‘s situation that made me pity him from the very beginning. The rather graphic opening credits alone told me nothing I didn’t already know, but I was rather taken with how director Tim Burton was so willing to place such imagery out there from the get-go. The music is haunting and pleasing to the ear despite its consistently dark tone (even the upbeat songs have quite an air of darkness about them) and the lyrics flew forth at a million miles a minute. The quick pace of so many of the songs was a bit surprising; there wasn’t much by the way of variety where singing tempo was concerned, though luckily there was just enough to keep the whole thing from feeling like a sort of fleet-footed monotony. Some of the lyrics were a bit on the cheesy side, but most did their job well. There’s so much music in this that it pretty well carries the whole film, overwhelming even the near-monochrome look that only someone like Burton could make work so perfectly. Even the sunny day at the sea seemed somehow shrouded in shadow.

I knew this film was going to be gory, but what particularly caught my attention was the sheer effectiveness of the visuals. Every time Todd slit a throat, it looked like it was really happening. It didn’t look like some stage gimmick (or film gimmick, actually); it looked pretty damn real. Sure, the blood was a bit bright, which held the fantasy by its britches and kept it from slipping away, but it was hard to not be impressed by the effects combined with the performances. Sure, shaving is a pain in the ass, but I’m quite happy that I do my shaving myself.

The story is quite simple. Benjamin Barker was sent Down Under for life on false charges, allowing the wicked Judge Turpin to have his way with Barker’s wife. His wife took arsenic, leaving behind her child Johanna, who became Turpin’s ward. Now, Barker, having escaped from prison, has found his way back to London with the help of romantically naïve Anthony Hope and has changed his name to Sweeney Todd. He returns to his old shop on Fleet Street and, receiving support and assistance from the smitten Mrs. Lovett, he begins putting his plan of revenge together.

It seems there’s just enough room for a happy ending, but in spite of this I strongly suspected there wasn’t going to be one. It was impossible for every character to come out of this situation happy. Mrs. Lovett loved Todd but the feeling wasn’t mutual. Todd wanted to see his wife and child again, but his wife was gone and his child, now a young woman, was set to run away with Anthony. And Toby, who had finally found parental figures in Todd and Lovett, was in what could only be described as a temporary solution to the problem of his tough street life. Someone was going to lose out. My suspicion proved true when, as it turned out, just about everyone lost out.

There are few colorful costumes or makeup jobs in this film, and those that make it in really stand out without, surprisingly, ruining the tone or the mood. In fact, they act much in the same manner as comic relief: a bit of a break from the gloominess to help the audience handle the further gloominess to come. Despite the consistent shades of gray, the whole thing feels spot-on. This is as much a credit to the designers and artists as it is to Burton, and it’s obvious he chose an excellent crew that knew precisely how to realize the vision he was after.

With the cast, however, I was initially apprehensive. Sure, there’s a near-unbeatable team in Burton and Johnny Depp, but Depp, despite his deep acting skills, can’t do absolutely everything. There’s always one kind of role that any given actor just can’t play. Fortunately, I didn’t see that here. Depp chewed up the scenery and sang with a commitment that transfixed me. He gave us Todd’s grief, his rage and his twisted pleasure in his work in as fine a manner as any I could have asked for. Helena Bonham Carter too was a surprise; she’s Burton’s squeeze after all, and could have been the worst casting choice on the face of the planet. But she gave it her all, and I saw none of the disaster I was expecting. She’s really grown as an actress, and she’s a damn good singer to boot. Her Mrs. Lovett was a largely unlikeable character, but coaxed just enough sympathy and pity in her words and actions that I was almost sorry to see her shoved into the oven by the only man she wanted, shrieking as flames consumed her . I wasn’t sure of Alan Rickman either. Don’t get me wrong. He’s a fantastic actor and plays villains well, but could he hold up in a musical? The answer is, yes he could, and with an effortlessness that contrasted nicely with Depp’s intensity. That fateful moment when Turpin, his face slathered in cream, looked up and realized the man he thought he was rid of loomed over him with a razor was electric. And you know, they sounded pretty good singing their little duet too.

Sacha Baron Cohen (best known as Ali G, or perhaps Borat) was another I was unsure about. The guy can improvise with the best of them, and he’s proven beyond a doubt that he can stay in character no matter what, but what role could he fill in a story of this kind? Turns out it’s Signor Adolfo Pirelli, the first person to recognize who Todd really is and, thus, the first to die under his razor. Baron’s talents are extremely well-utilized here, and though his time on screen (and singing, which is great) is minimal, he’s a real scene stealer and didn’t make me think for an instant that I was watching Borat as a [phony] Italian, even though I recognized the guy the second he made his entrance. Ed Sanders also impressed me; he played Toby with conviction and ease, and his singing was top-notch. He gelled with the adult performers. Something tells me that he’ll grow up to be a very successful actor, provided he doesn’t wind up pulling an Eddie Furlong. And I really hope he doesn’t.

The film’s flaws are very few. Jayne Wisener, lovely though she is (and man, I love the way her assets were shown off by that dress… YOW. Ahem. Sorry), didn’t exactly carry much other than a largely clueless look during most of her time on screen, and her voice was a bit shrill for my tastes. She’s effective enough as Johanna, and it’s easy to see why Anthony (played pretty much by-the-numbers by Jamie Campbell Bower, who at least is a good singer) is so taken with her [and why Turpin is so taken with her, for that matter], but she looks none too remarkable, especially considering the performances surrounding her. Also, I don’t know if this a fault with Sondheim’s original libretto or if it’s Burton’s approach or what, but it’s pretty obvious who the old beggar woman is, and when she winds up on the wrong side of Todd’s blade it pretty much sealed it for me that Todd wasn’t going to have everything he desired. In a way, it’s a sort of irony that’s gruesomely artistic (or ornamentally macabre; take your pick), but it certainly wasn’t a surprise. And I feel it should have been.

In any case, I was blown away. This is a great movie. It works as a musical. It works as a revenge story. It works as one of the top-tier entries in Tim Burton’s twisted celluloid library. I was never bored, never displeased and never sorry I was sitting there watching this oddly sublime bloodbath. I can see why the show was such a hit on Broadway (and, by my research, the film appears to have stuck to the Broadway show, but I can’t be completely certain as, again, I have never seen the stage version).

My dad asked if Sondheim wrote the libretto as well as the songs, to which I answered yes (alongside Hugh Wheeler, anyway) and he remarked on what a messed up dog Sondheim must be to write such a tale. I pointed out that Sondheim was also the man behind such works as Assassins and had, in fact, written plenty of messed up stuff, and my dad said he could see that. He then remarked that he’d seen less blood at a real slaughterhouse and that he wished he’d talked me into seeing Walk Hard instead. I couldn’t help but be amused at this. (I bet that if my dad weren’t already a vegetarian, this film would have made him one. Me, I’m gonna keep eating hamburgers.)

I give Sweeney Todd a 9/10 and I heartily recommend it to anyone who can stand to see the kind of carnage presented, and to haunting melodies, no less. Might not want to take any popcorn in with you, though.