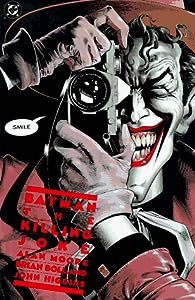 Cover of Batman: The Killing Joke

Alan Moore and Brian Bolland‘s The Killing Joke is thought of as one of the classics of the genre and one of the best Batmanstories to boot. Bolland’s artwork — typically reserved for cover slots only — is expressive and beautiful. And Moore’s writing, as always, is top notch. This is the Joker’s origin story — or, at least, one of them, as the creators have implied that it’s perhaps one of many the madman has concocted for himself, combined with a chilling crime against Barbara and Commissioner Gordon.

The most interesting thing about the story is perhaps the way it opens with Batman attempting to reach out to the Joker; the idea that the one thing that Batman hadn’t already tried with the Joker is reasoning with him and, in an odd way, bonding with him is an interesting one. Unfortunately, the Joker’s escaped again, but, well — I’m getting into spoiler territory here.

The relationship between Batman and the Joker has always been one of the most interesting ones; the Joker’s often likable in a goofy sort of wouldn’t-want-to-have-anything-to-do-with-him-personally way, and, alternately, Batman himself can be a bit prickly. Both have their reasons and their ways of coping with similar events. In fact, this acts as an excellent companion volume to Grant Morrison & Dave McKean‘s Arkham Asylum which explores Batman’s sanity and whether or not Batman is sane or if the fact that he BECAME Batman is the only thing that DID keep him sane.

Batman is one of the most interesting mainstream superheroes, and he seems to draw some of the best authors and artists as well. Alan Moore is perhaps THE master comic writer, and Brian Bolland’s no slouch either. This book is amazing and a must-read for all comics fans, including those who aren’t typically drawn to superhero books. (Truthfully, this often includes me!)