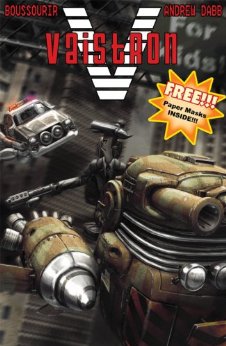 The new graphic novel Vaistron collects the Slave Labor Graphics/SLG Publishing five-issue miniseries by Quebecois artist and writer Boussourir and co-writer Andrew Dabb; a comic with a distinctly European flavor and outstanding artwork that sucks you into a dystopian world of constant warfare and an idiotic leader.

The thrust of the story is on Gabriella Bukowsky, a re-animated, sociopathic hijacker and murderess, and her plot to kidnap the mistress of the richest man in the city in order to rebuild her car after a heist gone wrong. Though, on the face of it, it sounds like a relatively simple plot, there is much more going on; this doesn’t even touch on the underground cannibals, or the headless “Free-Minders”, or the superhero with the regenerative body and penchant for dog-fucking. Uh, that last one is probably a pretty good hint that this book might not be for those who are offended easily.

With the gleefully offensive, there’s always a risk that the work ends up falling into the unfortunate trap of shock-for-shock’s-sake; a depressing trap where there’s nothing more being said than “Look at me! I’m edgy!” Luckily, Vaistron doesn’t pitch forward into that pit. While there’s enough to shock people who are looking to be shocked, the material is witty and engaging enough that it doesn’t merely rely on the outrageousness alone. There are lots of little bits of business; the opening scene with references to a brothel that offers a “Giger Special”, an argument between a driver and his military-class protection droid over their relationship, and a little program called ORGASMDLL32.exe. This sense carries over into the design of the book as well; the title and end pages contain excerpts from the Daily Vaistronian (including a hilarious excerpt from the daily comic page) that provide a bit more backstory on the city itself.

Vaistron is a pretty quick read, though the panels are densely packed like some of the best stories in Mad, so there’re lots of little details to pore over. The story itself is engaging and the detours and side-stories add to the general feel and atmosphere. When reading it, you really become part of the world (while being simultaneously glad you’re no where near the city, as it doesn’t really appear the average life-span is particularly long).