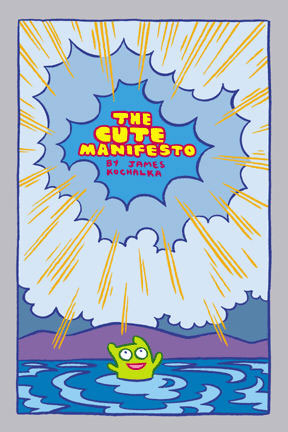 When James Kochalka‘s original essay “Craft Is The Enemy” appeared in The Comics Journal, it generated quite a bit of controversy. People misunderstood his point and thought that Kochalka was saying that the ability to draw well was a hinderance. He then wrote a followup, “Craft Is Not A Friend”, which clarified his position — not that drawing well is a hinderance, but that NOT drawing well wasn’t necessarily a hinderance either. The point was to make the best art that you can given the skills you’ve got — and use the fact that the more you create, the more your skills will grow, but that the SKILL itself shouldn’t be the goal. Kochalka says the goal isn’t to make good DRAWINGS, but to make good COMICS. And if good drawings come out of that, so much the better; but being a particularly good draftsman isn’t the same as being a good cartoonist.

This still wasn’t a particularly popular view, though it’d been something Kochalka’d been working toward for a while. The compilation book The Cute Manifesto (which includes both those essays) features comics on that topic. Sunburn is a gorgeous piece on learning to accept yourself — admittedly, when I first read it in the mini-comic it was originally released as, I didn’t enjoy it much, however, in the surrounding context of The Cute Manifesto, the story works. The first step in rejecting the necessity of craft to do things “well” is to be comfortable with who you are and your own particular skill sets.

The next stories in the book, Reinventing Everything Parts 1 and 2, are a post 9/11 exploration of art and culture. Part 1 focuses mostly on the “low-culture” status of video games and how they don’t need to be seen as just pixels on a screen but art that can resonate with the viewer/player as much as a film, book, painting or whathaveyou can. Kochalka extrapolates that to the cacophony of the real world and using the rhythm in the cacophony to find the beauty in everything.

While Part 1 makes a fleeting reference to 9/11, Part 2 opens with it and uses the horror of that to make a point about another sort of creation in the face of death and destruction. The story explores the events leading up to Kochalka’s first son, Eli’s, birth, and the purchase of a new house. Kochalka uses this as both a metaphor for not letting your art stagnate and as an explicit statement of not letting LIFE stagnate as well.

The centerpiece of the work which gives the book its title is a call to embrace beauty, cuteness and joy in the midst of pain, ugliness and suffering. Kochalka’s art has always had an ernest quality to it — which is often refreshing — and he’s always celebrated the small moments in life which make it special. In this piece, he’s explicitly stated what’s often been obvious in his other work — and, despite the obviousness (or perhaps because of it), the very thing that is often missed in his work and the very thing that makes his work so profound. Kochalka’s stories are as much mood pieces as they are traditional narrative, and always resonant; particularly his later works. As Kochalka himself states, creating good art leads to creating better art the more you do it — even if the skills stay the same (which, in Kochalka’s case, they’ve improved as well, though he still keeps his own style).

The Cute Manifesto also includes an earlier piece, The Horrible Truth About Comics (which has been otherwise out-of-print for years) where he explores what it is to create — comics in particular, but any art, really. The last piece in the book, is a short epilogue that sums up both his points in the main book, but also the importance and need to explore different trains of thought; this is what Kochalka believes, but he realizes it’s always important to see what else is out there. And this is a great place to start. I’ve often thought that Kochalka is one of the important greats of comics today, and this further reinforces my feelings. This book is important, and if you care about creating — comics or not, but any sort of art — you need this book.