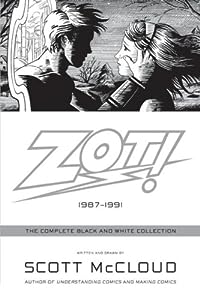 I’m not sure where comic-critical reception is on Scott McCloud, creator of Understanding Comics

, but I’ve gotta say that I liked, well, at least the first two of those (still haven’t read the third) — even if I don’t agree with all of his ideas. For example, the Infinite Canvas has never really clicked with me — at least not in most executions of it. But whatever you think of McCloud’s ideas, he’s thought them through pretty well, and it’s about a love of the medium of comics.

I’d mostly only read his work ABOUT comics, so when an omnibus edition of his previous comic series Zot was released, I was interested. This edition of Zot is fully annotated, each issue with a corresponding essay explaining where McCloud was coming from, and how he was using Zot to fully get a handle on his craft. As expected in a situation like that, the later issues are typically the best — which also combines with a change in direction. Instead of being a teenaged superhero parody with some more realistic, darker elements, it became a more serious comic taking place only in our world that just happened to have a superhero in it. Most of the stories were much smaller — about relationships between the characters and the home life of the secondaries.

Not every storyline fit — for me, while McCloud is commended for doing a coming-out story in what could be considered a relatively mainstreamish comic, the character of Terry just seemed cruel and unlikable — more so than her “inner struggle” could have accounted for, plus her desire to be “normal” almost seemed retconned in from her fear of the unknown in the issues involving Zot’s world. Those considerations aside, the other characters in the story are well-written, which does lead to a satisfying story, even if not as satisfying as it could have been with a more fleshed-out central character.

Given the author, the experimental side pops up from time to time in Zot as well — in the Terry-Coming-Out issue, there’s a sequence referenced in Understanding Comics where there’re a grid of panels that can be read in almost any order. Or, art-wise, the character of Dekko, a cyborg who tends to see in a crystalline, abstract way quickly became my favorite of the rogue’s gallery. Not to mention the various asides on the nature of art (including in the Dekko story, where Zot’s uncle encourages Jenny to throw a frame on a random place on the ground, and examine what is IN the frame, versus what is outside — giving significance to a particular rectangle of our world, looking at it in a way we’d normally overlook.

Given that Zot was what came before Understanding Comics, it might not be the Comics How-To Textbook folks might be expecting – but then, it’s not really fair to think of it as that. What it IS is a compelling story, and an interesting look at the early work of a writer/artist.