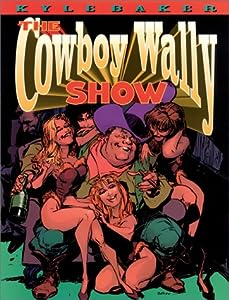 Cover of The Cowboy Wally Show

Kyle Baker is probably most known for Why I Hate Saturn

which… I haven’t read yet. But The Cowboy Wally Show was his debut graphic novel, and my second (or perhaps third) experience with his work; the first was the Residents‘ Freak Show

companion comic to their album

collections, which he contributed to (things you find doing research, huh?); I’ve only got one of those so far, and I don’t remember if he’s in that one or not. Anyway, though — I now know I’m going to have to go back and look, and Cowboy Wally is excellent.

The story’s a comic look at a more-or-less untalented guy who ended up becoming at least somewhat of a star (more so in his own mind), and brought down the stigma of being “fat, loud and stupid”. Cowboy Wally is almost spherical, but he’s got sort of a jolly nature… even if it’s mostly fueled by immense quantities of beer and likely to turn quickly sour. He very rarely actually gets through a joke, but through perseverance (and blackmail), he does all right for himself.

Kyle Baker’s obvious influence on his storytelling is the Harvey Kurtzman Mad comics; lots of throw-away jokes with a great rhythm and that same sort of meta humor (though not so much about being in a comic book, but rather about being in shows within shows). There’s a quick patter between the characters that brings the dialogue just out of the page and into your ear, and the jokes themselves — while sometimes corny — are always hilarious. (Some of them define the phenomenon of laughing in spite of yourself — like, say, the “By royal decree of Ray Davies… Ray Davies” “Sorry, we haven’t worked all the kinks out yet” exchange.)

Baker’s art, too, is astounding; a very stark look — some of it reminds me of Feiffer (particularly his lack of word balloons), some a little bit of Eddie Campbell (though a lot cleaner, and typically a little more cartoony), and, well quite a few other artists I’m blanking on — but it’s definitely his OWN style; you’re not going to confuse Kyle Baker’s art for anyone else’s. In fact — I love that Cowboy Wally himself is a goofy looking cartoon where many of the other characters are more realistic-looking… and yet, they all look like they’re from the same world. Cowboy Wally and his butler Carol belong together in the same panel, even if Carol looks like a real person, and Cowboy Wally would probably be kind of disturbing made flesh. It works.

Having read The Cowboy Wally Show, the fact that I’m writing this relatively late in the evening is the only thing that’s stopping me from going down to the comic store and buying the rest of his stuff right now. So, be warned — if money’s tight right now, you MIGHT want to hold off on reading this — since I’m thinking it’s not just me.