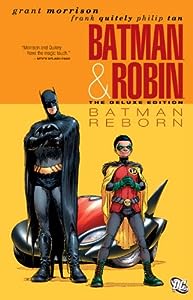 While I’m a comics geek, I’m typically one of those folks who likes to wait for the trade. No ads, and you get to read everything all in a chunk; instant gratification. But every so often, it’s hard to wait for the trade. And while my original plan was to wait for Grant Morrison and Frank Quitely‘s reboot of Batman & Robin to be collected (like the recent Batman RIP volume… which I still need to pick up), when I found myself in a comic shop the other day, I saw issue #1 on the new release wall, and figured why not.

And, now, of course, I’ve got to go back NEXT MONTH and get the next issue. I know, having to go to a comic store is absolutely the worst thing ever for me, totally.

I am a big Morrison fan (I could have SWORN I’d written a review of The Filth; I didn’t, so here’s the capsule version: It’s awesome. Read it.) as well as a Batman fan, so I suppose I’m kinda the target audience. However — the fellow at the comic shop doesn’t like Morrison much at all, but he also dug this book. And, well, Frank Quitely’s art is amazing as always.

The story takes place shortly after Bruce Wayne‘s death, with Dick Grayson stepping into the role of Batman, and Damian Wayne (I had to look up who he was; apparently he’s possibly Bruce’s son) as Robin. Batman’s been silent for a while and folks on both sides of the law think that the Bat is finally dead. The opening scene is the Toad making a standard getaway from the crime scene — but then the Batmobile arrives in chase. Toad’s dispatched handily and after Batman and Robin are re-acquainted with Commissioner Gordon, we’re introduced to Pyg, who has the potential to be an incredibly creepy villain.

Morrison’s writing is superb as always, and the story grabs you pretty much immediately (though beginning things in medias res has a tendency to do that). Quitely’s art is astounding and beautiful — and perhaps the best thing is the way he handles onomatopoeia, where it’s integrated seamlessly into the artwork. Re-reading the issue, I’ve discovered sound effects I didn’t even notice the first time — they just blended in and looked natural; for example, the explosion in the very first panel. Alex Sinclair‘s coloring shouldn’t be discounted either — the complete package is gorgeous. The high quality of this issue makes it so I can hardly wait for next month to pick up #2.