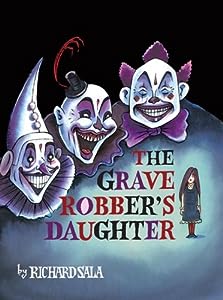 I’ve loved Richard Sala‘s stuff for a really long time — even before I knew I did, when I was watching his Liquid TV shorts, “Invisible Hands”. He’s got a great visual style that’s hard to describe. It’s one of those that seems relatively hard to place in an era; some aspects look like the 1990s-2000s, but there’s a definite quality of 1950s pulp fiction, both in his writing and design sense.

The brief story, The Grave Robber’s Daughter, likewise takes place in a time hard to pin down. Some of the characters’ clothing is that of 1950s-era teenagers, though Judy Drood, the protagonist, drives an old ’72 Datsun — but no one has cell phones; and some of the young women wear more modern clothing. The combination of all these elements — plus the fact that the titular grave robber and his daughter both seem more along the lines of a turn-of-the-century folk tale — give the book a timeless quality… though Drood’s propensity for colorful language definitely gives it a more modern feel, despite her ’50s dress style. Very few folk tales have “Fuck, fuck, fuck!” as the opening words.

was a much longer story featuring the cursing girl sleuth. Mad Night is perhaps a better Drood volume, just because it’s longer. Though Grave Robber’s Daughter doesn’t feel rushed, I wish it were longer, just because I love spending time in Sala’s worlds, filled with creeps, goons and supernatural horrors as it may be.

I referred to not knowing that I was a fan of Sala’s — the first time I was aware of who Richard Sala was, was his story “Herman The Human Mole” in the excellent comic

curated by The Residents‘ based on their outstanding Freak Show

album. There were lots of great cartoonists in that volume that I was turned on to. Not only Sala, but Dave McKean, Kyle Baker, not to mention the outstanding cover by Charles Burns. Between that and Liquid TV, I suppose I was fated to be a huge comics fan.