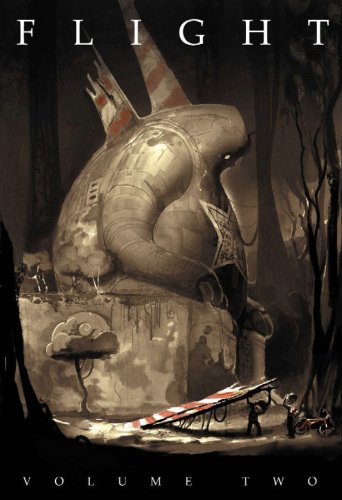 It seems that a good compilation is quite possibly harder to put together than a single creator book. With a single creator book, there’s only one set of tastes to worry about — whether or not the reader’s will match up to the author’s. If the author and reader are in sync, the reader’ll probably like the book; if not, they won’t. But with a compilation, there’s the reader and editor to worry about as well as the individual creators. Usually, the work will be in a similar vein, particularly if there’s just one editor — but there are myriad permutations of that vein, and not all will hit everyone — and that’s the general problem with compilations. Even if you like the editor’s own work, you might not enjoy the types of work they enjoy.

Luckily, the Flight series is pretty successful; I’d always heard good things about it, and of the creators I’d heard of, I was a fan of many (including Vera Brogsol, who sadly only has a one-pager in this one; as well as Don Hertzfeldt, the amazing animator), and interested in some of the others (Michel Gagné – an amazing artist, and Doug TenNapel, creator of Earthworm Jim).

The cool thing is there aren’t any stiffs in the compilation — while I didn’t necessarily like all the stories, it was because they weren’t my type of story — not because the creator wasn’t talented. But the bulk of them WERE my type — and the compilation starts strong. The first four in particular are very strong — and all different. There does seem to be a sense of childlike wonder through these four (and most of the book). Of the four, I particularly like “Jellyfruit” by Catia Chien, a short vignette about a child and a cat playing in a forest.

If there’s one that doesn’t work — it’s Matthew Woodson’s “Tendergrass”; I just can’t figure out what’s going on in it — but its in a way that makes me think it’s borrowing from a cultural folk story or myth that I’m just unaware of. The art in it is quite beautiful, though, even if the story (seemingly about a couple, made of a woman walking through a corn field and a man who captures a snake, cuts it open, and then it turns into a cut-open deer? Or something?) doesn’t make sense to me.

It’s hard to pick a best story, though; Richard Pose’s “Beisbol” does the seemingly impossible and made a sports story that’s actually interesting to me. Johane Matte’s “Icarus” is a nice bit of levity (pardon the pun), Giuseppe Ferrario’s “The Flying Bride” captures the feel of silent films, “Wilford’s Stroll” by Justin Ridge is gorgeously rendered and a cute story, but I think my favorite MIGHT be “Ghost Trolley” by Rad Sechrist — a fun story with great art, about a trolley car that picks up both human passengers and ghosts. (And also a cat.)

If there is a problem with this volume of Flight, it’s that too many of the stories veer into faux-arty-mysticism for my tastes — people trying to write new fables or other things that seem to over-reach in terms of quote-unquote importance; but they are well-done even if not successful, and worth the read. Flight is worth checking out, and the best thing is that there are 5 other volumes — and a new offshoot directed at younger readers as well — even though Flight itself seems to work, more-or-less for most ages — I wouldn’t see a problem with giving this volume to a, say, 10-year-old if someone were so inclined — but of course, before you do, read it yourself first. Not only are you the best person to know what’s right for your child — you’ll probably enjoy it quite a bit, too.