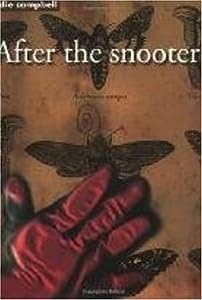 Cover of Alec: After The Snooter

I like autobiographical comics — particularly ones that seem to fit the diary feel. Sure, there’s a lot of awful ones, but that’s true of anything. When it’s done right, though, they’re typically deeply interesting and enjoyable. And, well, it helps when it’s done by a top-caliber artist like Eddie Campbell.

After The Snooter is the first of Campbell’s volumes of these types of comics where he drops the façade of using “Alec” as a buffer character between him and the comics. Not that it really matters too much, I suppose, but still. Most of the stories in here are slice-of-life; a few about when Campbell was growing up, and a handful of other vignettes, but most are about the period in his life from when From Hell

was being adapted from the comic

he created with Alan Moore, to the film starring Johnny Depp. (Still have never seen the film, but the comic’s great.) In fact, the penultimate comic takes place at the Hollywood premiere of the film.

In between are stories about Campbell being a courtroom sketch artist and the launch of his own publishing house, Eddie Campbell Comics. A lot of the stories, though, are just about his family and friends in Australia, which is really enjoyable reading. Like with a lot of the autobiographical comics I like (James Kochalka‘s for example), Eddie Campbell seems like a really affable, friendly guy; he doesn’t seem to whitewash his flaws, and in fact there’s lots of introspective stuff — a lot on the topic of whether or not he should stop drinking (though I don’t get the impression he’s an alcoholic) and other anxieties.

And, of course, it’s Eddie Campbell, so I don’t need to tell you the art is exquisite.

Eddie Campbell is a great cartoonist, and I’m glad that Top Shelf is putting out his books in the US — I’ve got a big stack of them already, but I know I need to fill in the holes pretty quickly.