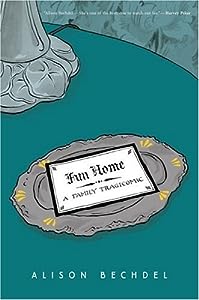 I really love the way Alison Bechdel draws eyes. They almost always suggest a sense of weariness, even on children. Eyes are often said to be the most striking feature of the face, and in Bechdel’s characters, it’s true. There’s something emotional-yet-guarded about them. Which makes sense, as there’s so much being hidden amongst the characters in Fun Home.

Fun Home is a memoir about her late father, hit by a Sunbeam Bread truck in what may have been a suicide or perhaps just an unfortunate accident. Bechdel (known most for her acclaimed strip Dykes to Watch Out For

) had just come out to her family, and in so doing, discovered that her father had also been gay (or perhaps bi) — and this happened only a few months before his death.

In a way, Fun Home is an exploration of guilt — Bechdel makes reference to feeling guilt in some way — that if she hadn’t come out, her father hadn’t have jumped backwards (“as if he saw a snake”) into the path of the truck. The book never fully answers whether or not his death was a suicide; the actual situation does sound like an accident, but when you think about how his family found out his secret and his marriage was over, it becomes a bit more nebulous.

The “Fun Home” of the title is what the Bechdel family called the place of their side business — a funeral home. (The title kind of reminds me of the scene in The Simpsons when Marge is at Sundance and sees a movie called “Candyland” and says “I get it! Every title means the opposite of what it means! Then I guess I’ll love… Chernobyl Graveyard!“) It’s not nearly THAT drastic, though Fun Home isn’t exactly the feel-good hit of the summer. But in a way, it’s uplifting; Bechdel, in coming out, is able to embrace who she is — even if she’d been kept from that in childhood — and in analyzing her past, she is able to understand and grow closer to her father, even if he wasn’t necessarily the ideal dad. It’s a great book — but, I suppose I don’t really need to mention that as it HAS been on about 80 billion “best book ever” lists. But, just in case you needed that extra nudge — definitely check it out.