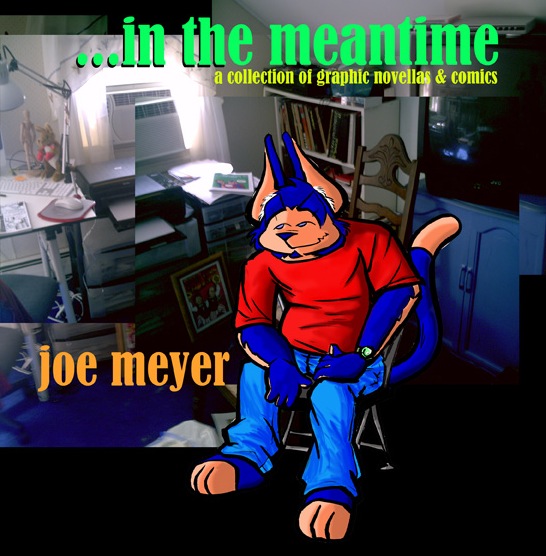 It’s time for Full Disclosure Day on Kittysneezes! Not only do I know Joe Meyer, the artist/writer of In The Meantime, but he’s also contributed the awesome interview with C.H. Greenblatt, the creator of Chowder

. So, yeah — I’m not trying to pull a fast one here by telling you to buy this wonderful book without letting you know that he’s a friend of mine.

That said, you should buy this wonderful book, even though he’s a friend of mine.

I love Meyer’s artwork; his linework is clean but has a soft look to it — his characters always look so inviting — even when he’s drawing people and not giant kitties and kangaroos and stuff. (Because, really, who wouldn’t want to be friends with a giant kitty?) He’s got such control over his art too — even when things get manic, they’re clean and easy to read; Meyer’s work is never cluttered. I’d love to see some more silent comics from him — I’ve read a few recently from other people and aside from some of the masters like Sergio Aragonés, there seems to be a line of thinking that runs that since you don’t have to take up space showing word balloons, you can fill it with as much stuff as you can fit in — and that doesn’t work…. it just makes it hard to follow. (And I’ve seen this in work intended as all-ages stuff to get pre-reading kids into comics!) Meyer understands this — not only is he a great artist, but he understands design. His work is beautiful on both levels.

In The Meantime is meant as an interstitial between volumes of his Destroying the Illusion series of autobiographical comics; as such, the stories in In The Meantime are likewise autobiographical, but more along the lines of exploring aspects of Meyer’s personality and less of telling straightforward stories. It’s hard to pick a favorite, but I might have to go with the story exclusive to this collection, “My Therapist”, about his cat. It’s a story of love, and that’s partly what makes Meyer’s work so compelling — even when his work is angry (like in “Man of Principle”), it’s out of a desire for love and understanding. It’s that, along with the softness of his art, which makes his books so inviting and comforting. Even if I didn’t know it for a fact, I’d suspect that Meyer was just a really nice, friendly, caring guy. I’d want to get to know him. And luckily, I do. But if you don’t know Joe (well, you can go meet him; he’s got a comics site at WebComics Nation and an LJ), knowing his comics is the next best thing. He puts so much of himself in there, it’s almost as good. For a guy who’s sometimes a giant kitty and sometimes a giant kangaroo, he sure is HUMAN.