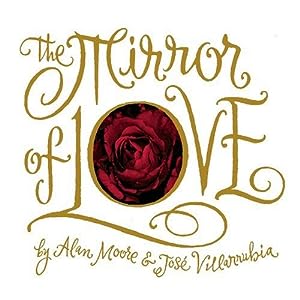 Cover of The Mirror of Love

Alan Moore is a genius. This isn’t something that should be considered news to anyone. It’s practically a given, a truism. He may have had a misfire or two (unfortunately, A Disease of Language

left me cold, though it was beautiful to look at with Eddie Campbell‘s art), but even those are at the very least interesting.

The Mirror of Love is not a misfire. It’s also not a standard comic — though it did start life that way. The text first appeared in a 1988 comics anthology to bring attention to Clause 28, a 1986 Local Government Act in England and Wales prohibiting anything from the government to be seen as “promoting” homosexuality as well as labelling gay relationships as “pretend”. In this original incarnation, the text was illustrated by Steve Bissette and Rick Veitch. The new version by Top Shelf omits the drawings for photographs by renowned artist José Villarrubia.

The prose-poem is exquisitely written and is an artistic history of homosexuality and gay love. It’s a moving piece; Moore’s text, quoting and paraphrasing other poems and works from gay artists and writers of time past is threaded together seamlessly (and an appendix includes the text of the original poems quoted as well as notes on the historical context and why those particular works were chosen).

The book is clearly a labor of love — which is appropriate since that is what the book is about: Love. Nothing more, really — not that love is a particularly small fry as topics go. There’s a lot to it, in fact; how the act of love became a political act and how love itself has become a magnet for hatred and fear.

This is the biggest baffling thing with homophobia for me — how can love — of ANY sort — be wrong or bad? In a world of so much ambiguity, one would think that love is the one thing that could be considered an Absolute Good — and yet, people are beaten to death or in some parts of the world, executed by the state, for loving the wrong person. It seems that we have enough hate in the world — any bits of love should be welcomed, regardless of the plumbing those in question happen to have. It really shouldn’t matter.

Often times, religion and God are pointed to as the reason why people are homophobic — but that seems odd and depressing to me. If God is Love, as so many are wont to say, shouldn’t, as Andy Partridge sang, any type of love be all right? To clarify — I can see the historical basis for it; during the time of the Bible, the prevailing thought was that everything was in a limited quality. The idea was that you were born with the amount of sperm that you’d ever have, and therefore to “waste” it on mere pleasurable pursuits like masturbation or non-procreative sex was dangerous as when it came time to have children and pass on the lineage and culture, there’d be none left. That view of anatomy is incorrect, but we can give the benefit of the doubt to people 6,000 years ago. However, we NOW know that that is NOT the case, and it’s silly to hang on to that notion, particularly when it hurts people for no good reason.

For most political issues of the day — I can see both sides. For example, while I’m strongly in the Pro-Choice camp, I can SEE why someone would choose to be Pro-Life; it’s a situation which makes sense to me. I may disagree, but I can respect the other side. Or with gun control, my stance on that changes — that’s how many good points both sides have. However, with anti-homosexuality issues like gay marriage or the protection of civil rights, I cannot see any VALID reason. It’s the one situation where I feel that I cannot say that I sympathize with those who disagree with me — in fact, I would LOVE to hear a valid reason that doesn’t boil down to “I think it’s icky.” The CLOSEST valid reason I’ve heard is that the government shouldn’t be in the marriage business at all, being a religious ceremony — which I can see, although it seems that usually from the folks I hear that from, they say that the government should have civil unions for EVERYONE… including gays. Which, well, to me is basically the same thing. No one should force a church to perform a gay marriage — if they want to keep on with their idiotic, backward ways on that issue, that’s their right — however, it should NOT be barred for everyone; that’s equally idiotic and backward.

I’ve long felt that people are basically the same; regardless of our race, religion, orientation, or anything, we all basically want the same things. We want to be protected, we want to not have to worry about where our next meal is coming from, and above all, we want to be loved. And that is something that should not be denied anyone, regardless of whether or not it’s a man and a woman, two men, two women, or any other combination of two-or-more adults. All I want is what you want; we’re only waiting for a Red Letter Day, as Neil Tennant sang.

I know that this should be obvious, and I figure to most of those reading this it is. But the odd thing is that not everyone sees it as obvious, and I honestly can’t figure out why. It doesn’t make sense. And one of the great things with The Mirror of Love is that it eloquently makes that point and makes it clear that there is one thing that should trump everything else — Love. And nothing lesser than.