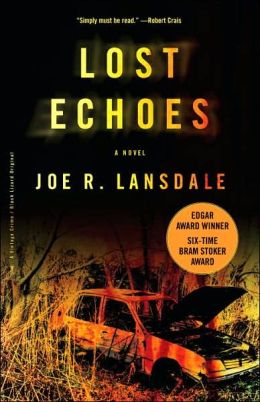 Joe R. Lansdale probably doesn’t need too awfully much of an introduction. He’s won a bunch of awards (including the Bram Stoker Award six times) AND he provided the source novella for the cult classic Bubba Ho-Tep

(speaking of which, if you haven’t seen it check it out immediately). Lansdale’s 2007 novel Lost Echoes isn’t as funny as Bubba Ho-Tep, but then, it’s not intended to be. It is full of dark humor, but for the most part, it’s an eerie creepy novel of a bizarre condition.

Harry Wilkes, you see, had the mumps as a small child. And that lead to a horrible ear infection, which led to him being able to see visions of fear, terror and violence triggered by sounds. The images, locked in the sounds that were similarly triggered at the time of the event (often innocuous; for example, the sudden delatching of a car’s glove compartment door triggers the image of a car accident killing the previous owners) terrify Harry so much he turns to a combination of booze and mapmaking to avoid the problem.

The setup is enough to make a novel worth reading — it’s not exactly a cliched plot; but what Lansdale does makes it an outstanding novel. He weaves in a murder mystery — and about halfway through, you think you’ve got it figured out, only to have it not turn out that way at all. Lansdale’s characterization is outstanding; you really feel that the characters are real and want to spend more time with them. Harry is, at his core, a sweet and good man, albeit a nervous one — though, with good reason. If I could be sent into a paralysis of fear at a door slamming, I’d be slinking around as quiet as I could too. And Harry’s friend Tad, a former martial arts instructor, is refreshingly no-bullshit; he says some of the traditional quasi-zen platitudes, but couches them in “Yeah, I know… but it’s really true” phraseology making it come from a real guy, rather than a all-knowing font of wisdom.

The heart of the novel, though, is Harry’s constant query as to why people feel the need to hurt each other. He wonders why violence seems to feature so prominently in the art of our culture — and yet, that violence is all about in this book. Our culture is, sadly, violent; but sometimes it’s the only way for protection — and as Tad learns, the reason to learn violence as defense is not to use it, but to defeat those who try to use violence against you as non-violently as possible… which is still, sometimes, pretty dang violent, depending on the amount of violence from the first party.