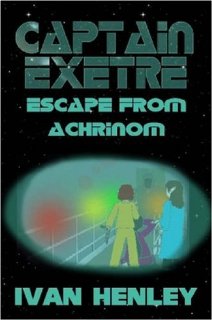 Full Disclosure Time: This book was written by Ivan Henley, whose name you may recognize as a Kittysneezes contributor. (In fact, I’d hope you WOULD recognize it, as he wrote the piece before last.) However, I had nothing to do with this book — I hadn’t read any previous drafts or anything like that; Ivan just sent me a copy asking for a review; here is that review. Even though Ivan is a friend of mine, rest assured that this review is an HONEST one; I wouldn’t write or post anything but. But that desire for honesty forces me to be completely up front about the connections between myself, the site, and the author. Kittysneezes is not necessarily adverse to reviewing materials done by other Kittysneezes authors, but all such reviews shall be honest and done by a KS author whose only connection to the work is that s/he experienced the finished product and ONLY the finished product. Thank you for understanding.

Ivan Henley’s a busy guy. He’s got a couple webcomics, quite a few books, and he writes for this site, even. Escape From Achrinom, the first in his new Captain Exetre series, is worth checking out, particularly if you’re a genre sci-fi fan.

The book is not perfect, however. First off, and this is purely cosmetic, but the inside of the book could look better; it looks like a MS Word .doc printed out and shrunk down with a too-tall top margin. Apparently, later books in the series will be designed a bit differently. The font is Times New Roman, which adds to the “Word .doc” effect, but then, I’m a font snob. (For serifed fonts like that, I’m awfully fond of Garamond, or even Palatino, one of the fonts that came with the old Macs.) Admittedly, this is a pretty minor complaint, though aesthetics are a decent-sized part of reading enjoyment. However, while the design may be inelegant, it is not DIFFICULT to read, which is the most important aspect.

The writing can take a little while to get going, though the story is fast-paced and exciting. In the earlier chapters, Henley uses a few clichéd sentence structures and stilted dialogue. In an odd sense, the fact that he writes as people talk, normally a boon, sometimes works against him — lines that would be perfectly natural on stage or in film can stick out on the printed page. There are also cases with the dialogue where “less is more” — once or twice, there’s a spoken reply to a line that would be more powerful as the end of a conversation. Again, this is something that happens in real life but, strangely, comes off as “fake” in fiction. (But, then, I could write a whole book on that!)

The one other main idea I had that I personally liked — not sure if it’d necessarily HELP, but hey — would be to position this as in the middle of some giant, long-running series. There are scenes where the back history is referred to — which is explained later — but it just tickles my fancy to think of it as a situation where you’re EXPECTED to know that type of thing, and then the recaps come for the poor suckers who happen to pick up a book in the middle of a series. However, this is most likely my massive amounts of McSweeney’s damage talking.

However, Henley is a great storyteller; none of my criticisms got in the way of my enjoyment of the book. If anything, they merely kept a pretty good book from becoming a great one. It’s a quick-paced, fast read that keeps you engaged. AND it’s got a talking dog. What more could you want?