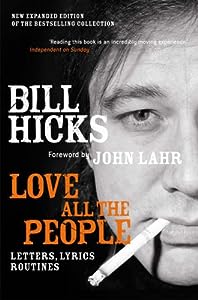 Cover of Love All the People

Bill Hicks often seems to be a comedian where you either don’t know who he is, love him, or absolutely hate him. There’s rarely much middle ground. And, well, I think Bill Hicks himself was more-or-less fine with that — or at least the last two. The first was long a source of frustration, which is perfectly understandable. At least, however, he was a star in the UK, even if his own home country never seemed to know what to make of him. (And later embraced Denis Leary, who ripped him off wholesale and watered him down. A joke I heard but wish I’d made up: Q: Why is Denis Leary famous? A: No cure for cancer.)

On the subject of cancer, it’s remarkable how young Bill Hicks died — he was only 32. And yet, he seemed older — in a well-travelled, knowledgeable way. Bill Hicks hungered for information, both the absorption and sharing thereof. And though he was often though of as an angry ranter, it became clear that he was an angry ranter not out of hatred, but of love — he wanted humanity to do better for itself, and closed almost all of his shows with a statement to that effect.

Love All The People is a bound collection of many of his routines — versions that were released on Rykodisc albums, as well as some previously unreleased ones, letters, essays, interviews and other Hicksiana. The book was originally for the UK market — which makes sense given his fame over there — and republished (but not “translated”) by Soft Skull Press here in the US. You can tell – there are a collection of footnotes to explain some of the references (most of which are obvious to a US reader but may not be to an Brit), and a few references that go unnoticed (for example, it’s clear by the lack of capitalization that the UK editors didn’t know what “Dogpatch” was, leaving it as “dog patch”, in reference to some hillbilly types not too far removed from Li’l Abner‘s hometown). Still — the notes do come in handy for US readers as well who might not remember who Jim Fixx was, or some of the details of Operation Desert Storm, one of Hicks’ frequent topics.

Not all of Hicks’ stuff hits, of course — I never quite got his obsession with the JFK assassination, or the Goat Boy character — but about 90% of it does, and hits dead-on. One of the great things with this book is that there are different shows represented from different eras, so you can see how his routines evolved. For a casual fan, this might make the book not one to read from cover-to-cover, but keep around as a bathroom book (which it would be excellent for, as Hicks’ stuff is pithy, funny, and usually very true) — but for a comedy geek, it’s incredibly enlightening. You can tell which parts were developed relatively early, and which parts he treated more like a jazz riff to improv off of.

Bill Hicks died too soon — it’d be interesting to see what he’d be doing now; not just in terms of material for his routines, but what other projects he’d be doing. He was just beginning to get in a place where he could apply his hyper-active mind into many different venues when he died. I don’t see Hicks ever becoming a big time movie star, or, in the US at least, even much more than a Cult Figure — but I think he’d be a much bigger cult figure, and probably someone along the lines of a Chris Morris, who, love him or hate him, grabs the media and viewership by the face and gets them to understand some truths about themselves — and, really, Truth is the main thing comedy is about.