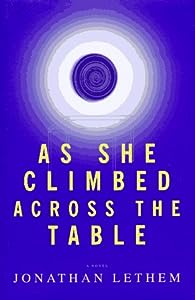 Cover of As She Climbed Across the Table

Despite considering myself a fan of Jonathan Lethem, I really haven’t read as much of his stuff as I should. In way of remedying that, I’ve recently read As She Climbed Across The Table — a brief novel which I believe is Janet’s favorite of his.

Lethem’s beginnings were officially as a Science Fiction writer, and this one is squarely in that field. Not of the aliens and whatnot sense, but in that it takes place in a physics lab at a college. The narrator is a english prof in love with a physics prof in love with, quite literally, nothing. Lack, as this nothing is called, is an anomaly which accepts and rejects random objects — or, seemingly random ones. It will consistently reject types of objects, and almost as consistently accept other types, though sometimes Lack “tires” of certain things, and rejects them, never to re-accept them.

It’s pretty clear that Lack is a metaphor — duh; though it’s a pretty layered one, and explain beyond the obvious one would be a spoiler, so I’ll refrain. But, as in the best fiction, just because Lack is a metaphor doesn’t mean that Lack’s not a real object in their universe — as well as a weird sort of character on its own.

Perhaps the interesting thing with the novel is how Lethem anticipates people’s predictions of what’s going to happen. In fact — reading this review, you’re probably even expecting that Alice, the physics prof, attempts to feed herself into Lack — you’re probably thinking this is the end of the novel, in fact. Nope — happens about 50 pages in. As the story progresses you keep guessing what the ending is going to be — and while a lot of times what you think will happen DOES, it just keeps going on top of that — in a way that makes it a surprise. For example — if I hint that I’m going to give you ice cream — you’ll expect me to give you an ice cream cone, or perhaps a small dish; it’d be a surprise if I delivered one of those gigantic sundaes, like what Napoleon gets in Bill & Ted’s Excellent Adventure

. This book is one of those sundaes. Only less likely to make you feel nauseous when you finish it.