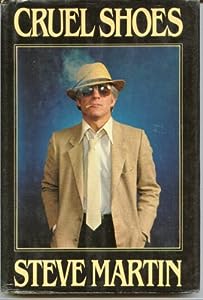 I have heard that Steve Martin is embarrassed by Cruel Shoes and that’s why he keeps it out of print. While I can understand being embarrassed by your early work (some of the original TODCRA essays bug me to bits), there’s absolutely nothing to be embarrassed about in this book.

Perhaps the most interesting thing is that it’s not a standard humor book like people might be expecting. It’s not just transcribed routines from the records intended to cash in; all of the pieces are originally intended AS stories. It should not be a shock that the stories themselves are all very good. (I think that Mr. Martin might have a good career as a writer should this whole comedy thing not pan out for him.)

Having just gotten into Barthelme‘s writing, I was surprised at how similar the styles were. Some of Steve Martin’s stuff might be a little goofier, sure, but a lot of it really isn’t — or at least, goofy in that same sort of post-modernist metafictional way.

For example, the title story, is on one level a surreal story, and on another level, the punchline of it is playing off of the idea of “beauty is pain”. But to look at the actual text of the story — there’s a lot going on. Martin is, firstly, an exquisite wordsmith; his sentences are perfectly constructed and enjoyable to read even as if they were meaningless in the larger context of the story. Even the title — “Cruel Shoes” — is an intriguing turn of phrase. The shoes themselves aren’t really cruel — yet that’s the best description of them. They’re not terrible shoes, they’re not uncomfortable shoes, they’re not malicious shoes – none of those has the same weight or meaning. They are CRUEL shoes.

Likewise, in Demolition of the Cathedral at Chartres, though it’s a brief story, it feels like an aside in a Buñuel film — an outtake from The Phantom of Liberty

. The best part isn’t the fact that the cathedral was torn down by accident — but that Mr. Rivers is so far removed from the act that he did, and approaches it like an American tourist who got to see some famous landmark before it fell apart; he’s got no interest in WHY it was destroyed, or even that it was destroyed accidentally BY HIM — it’s just something that happened, and it is perhaps a shame, but at least he got to see it before it was torn down.

“The Bohemians” (sadly, not available online) is another Buñuelian satrical slice where standard suburban life is raised to performance art — the mundane made aesthetic. Steve Martin’s flash-fictional style works very well for these, and I wish that this book were still in print, perhaps in an expanded version. It’s funny to me how if Cruel Shoes had a different name on it, the author would be most likely lauded as an excellent postmodern author — but given that it’s by that guy who’s on Saturday Night Live a lot and was The Jerk

, it’s a comedy book; normally, no problem with that, just a matter of getting over, as Barnes and Barnes put it, the Stigma of Comedy in the mind of the public at large — though that stigma can be used to introduce experimental or avant-garde forms; while comedy may be stigmatized, it’s also a great vector for slipping really out-there stuff under the radar of the populace at large.