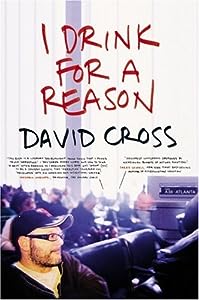 Cover of I Drink for a Reason

came out quite a few years ago, and aside from some TV and movie appearances, we haven’t seen a lot of David — at least doing his own material. (Which isn’t to say he hasn’t been performing; he’s been touring quite often during that time.) But we finally have a new album… kinda. Only in book form. Apparently there’s an audiobook

version of it — I haven’t heard it though, and I figure it’s probably just him reading from the book instead of delivering it like a standup set. Which makes sense, seeing as it IS a book and all.

Like his standup, it can be divisive, and it’s probably not going to convert anyone who hates David Cross. But that’s OK, too — I figure David didn’t really write this to do that. Hopefully it might reach some folks who don’t know his work but share his sensibility, and turn them on and they’ll pick up, say, the whole of Mr. Show

and Shut Up, You Fucking Baby!

and all that stuff. Which’d be good, because, seriously, you should totally have all of Mr. Show and Shut Up, You Fucking Baby, because they’re great.

I Drink for a Reason is split between more straightforward essays and the literary equivalent of sketch-comedy bits. There’re parts about growing up in Atlanta, and, um, hating his father, and then there’re lists of quirks for indie filmmakers (which gets a few good jabs at the inexorable Juno in), or ideas for shirts to be sold at Urban Outfitters. To be honest, the essays are the most successful parts of the book — though some of the lists are pretty amusing too — and mercifully brief — so they act as amusing enough breathers from the more weighty stuff.

Some of the stuff at the end is made of reprinted material (like his pretty great takedown of Pitchfork that actually appeared on Pitchfork), but it’s nice to have that stuff in one place, too.

Perhaps the best part (aside from the essay where David Cross goes on, unironically, about how to play the game “Mafia”) is when he talks about WHY he’s got the feud with Jim Belushi. And, well, it’s a pretty dang good reason. It turns out Jim Belushi’s a huge asshole. Which is odd, because from what I’ve heard, John Belushi (a/k/a the talented one) was actually a pretty good, nice guy who just happened to like mountains of drugs. You’d think the untalented one just coasting on a famous last name would be a bit more gracious than that, but hey. Anyway — I’m not going to spoil it — it’s in the book, but I’ve heard him mention it elsewhere, but when you read it, you’ll be pretty gobsmacked at what a pure jerk Belushi could be. And it makes this famous video still seem a little awkward… but just that Cross didn’t go far enough. (Seriously: What I’m trying to say here is that Jim Belushi is a horrible person.)

So, yeah — while it might not be the best replacement for a third standup album, just because I do like hearing David Cross talk — it’s pretty dang good. And, a book by a standup comedian that’s not just a rehashing of their standup (I’m looking at you, George Carlin) is nice too. (Though, it’s sad to say, throughout the book there are lots off misspellings nad typos.)